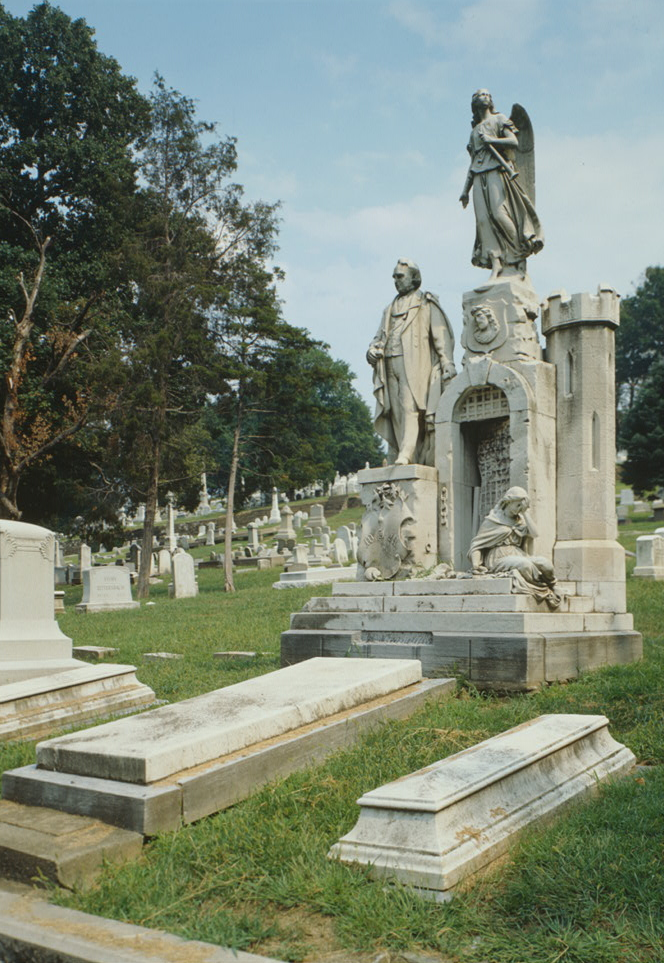 Laurel Hill Cemetery, in , is the second major in the and one of the few cemeteries in the country designated as a . [ [http://tps.cr.nps.gov/nhl/detail.cfm?ResourceId=272336158&ResourceType=District Listing] at the ] John Jay Smith, a librarian and editor with interests in horticulture and real estate who was distressed at the way his deceased daughter was interred in a Philadelphia churchyard, founded Laurel Hill in 1836. He and some other prominent citizens decided to create a rural garden cemetery five miles north of Philadelphia that was viewed, at the time, as a safe haven from urban expansion and that would be a respite from the increasingly industrialized city center. The city later grew past Laurel Hill, but the cemetery retained its sylvan character.

Famous figures were initially relocated to Laurel Hill Cemetery to increase its cachet, including Continental Congress secretary ; signer ; Philadelphia war veteran and shipbuilder ; , hero of the Battle of Princeton and director of the U.S. Mint, . During and after the , Laurel Hill became the final resting place of hundreds of military figures including 42 Civil War era generals. Laurel Hill also became the favored burial place for many of Philadelphia's most prominent political and business figures including , founder of the ; , owner of the largest saw manufactory in the world (the ), and , the financier.

Designated as a National Historic Landmark in , Laurel Hill Cemetery with its spectacular vistas and thousands of 19th Century and 20th Century marble and granite funerary monuments encompasses 74 idyllic acres terraced above the in the East Falls section of Philadelphia. Forests of obelisks dot the rolling terrain highlighted by elaborately sculpted hillside tombs and mausoleums. Overall, Laurel Hill contains more than 33,000 monuments and more than 11,000 family lots.

Designed by noted Scottish-American architect , Laurel Hill introduced new landscape ideas and burial concepts and became a model for the rural cemetery movement. Laurel Hill Cemetery stands as a rich repository of both art and historical artifacts. Its monuments embody the rich design, craftsmanship and iconography of 19th and 20th century American , from simple to elaborate mausoleums.

Much of the significance of Laurel Hill cemetery derives from its large number of mausoleums, built in a wide variety of styles by some of Philadelphia’s most distinguished families. , , and other exotic styles are rendered in a wide palette of materials, including marble, granite, cast-iron and sandstone. Notable artists and architects, including Notman, and William Strickland contributed their designs. These monuments tell many stories of the history and evolution of not only the cemetery’s growth, but also of social and economic changes, the legacy of wars and of the individuals who shaped our nation’s history.

From its inception, Laurel Hill was intended as a civic institution designed for public use. In an era before public parks and museums, it was a multi-purpose cultural attraction where the general public could experience the art and refinement previously known only to the wealthy. Laurel Hill became an immensely popular destination in its early years and required tickets for admission. The writer reported “nearly 30,000 persons…entered the gates between April and December, 1848.”

As an important local destination, Laurel Hill is seen as a cultural gem and a destination for historians and connoisseurs of architecture and horticulture as well as for the interested public. Laurel Hill provides a fusion of history and art and is the final resting place of many of Philadelphia’s famous and elite.

Some of the notable persons buried in the Laurel Hill Cemetery are:
*Robert Adams, Jr. (1849–1906), U.S. Congressman from Pennsylvania