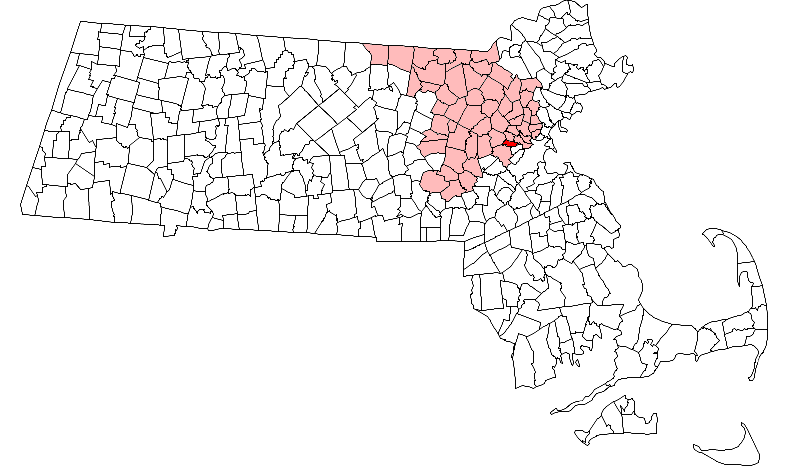 Watertown, first known as Saltonstall Plantation, was one of the earliest of the settlements. It was begun early in 1630 by a group of settlers led by Sir and the Rev. George Phillips and officially incorporated that same year. The alternate spelling "Waterton" is seen in some early documents. [Young, Alexander (1846). "Chronicles of the First Planters of the Colony of Massachusetts Bay, 1623-1636", pp. 313-14. Boston: Charles C. Little and James Brown.]

The first buildings were upon land now included within the limits of Cambridge known as Gerry's Landing. For its first quarter century Watertown ranked next to in population and area. Since then its limits have been greatly reduced. Thrice portions have been added to Cambridge, and it has contributed territory to form the new towns of Weston (1712), Waltham (1738), Belmont (1859), and Lincoln. In 1632 the residents of Watertown protested against being compelled to pay a tax for the erection of a at Cambridge; this was the first in America against and led to the establishment of in the colony. As early as the close of the 17th century Watertown was the chief and market in and was known for its fertile gardens and fine estates. Here about 1632 was erected the first in the colony, and in 1662 one of the first in America was built here.The , after adjournment from Concord, met from April to July 1775 in the First Parish Church, the site of which is marked by a monument. The held its sessions here from 1775 to 1778. Committees met in the nearby . Boston were held here during the , when many Boston families made their homes in the neighborhood. For several months early in the the Committees of Safety and Correspondence made Watertown their headquarters and it was from here that General Joseph Warren set out for Bunker Hill. [Hodges, Maud deLeigh. 1980. Crossroads on the Charles. Phoenix Publishing, Canaan, NH ] From 1832 to 1834 conducted a private school here and his name is still preserved in the Parker School, though the building no longer operates as a public school.

The operated continuously as a military munitions and research facility from 1816 until 1995, when the Army sold the property, by then known as the Army Materials Technology Laboratory ( [http://www.globalsecurity.org/military/facility/watertown.htm History of the AMTL] ) to the town of Watertown. The Arsenal is notable for being the site of a 1911 strike prompted by the management methods of operations research pioneer ( [http://www.makingthemodernworld.org.uk/stories/the_age_of_the_mass/05.ST.06/?scene=2&tv=true Taylor and 1911 Watertown Arsenal Strike] ). Taylor's method, which he dubbed "Scientific Management," broke tasks down into smaller components. Workers no longer completed whole items; instead, they were timed using stopwatches as they did small tasks repetitively, as Taylor attempted to find the balance of tasks that resulted in the maximum output from workers. The strike and its causes were controversial enough that they resulted in Congressional hearings in 1911; Congress passed a law in 1915 banning the method in government owned arsenals. Taylor's methods spread widely, influencing such industrialists as Henry Ford, and the idea is one of the underlying inspirations of the factory (assembly) line industrial method.

The Stanley Brothers built the first of their steam-powered cars, which came to be known as s, in Watertown in 1897. [http://www.conceptcarz.com/vehicle/z11210/Stanley_Steamer%20Rocket/default.aspx]

In 1988, Watertown Square became the new location for the , said to host the largest collection of Armenian artifacts in North America.

The Watertown Arsenal was the site of a major superfund clean-up in the 1990s, and has now become a center for shopping, dining and the arts, with the opening of several restaurants and a new theatre. The site includes the , a community arts center that opened in 2005.

Watertown is located at coor dms|42|22|17|N|71|10|55|W|city (42.371296, -71.181961).GR|1 To the north, it is bordered by the town of Belmont, along Belmont Street; to the south, it is bordered by Newton and Brighton - the border being largely formed by the . However, in Watertown Square, the nexus of the town, the town's border extends south of the Charles to encompass the neighborhood surrounding Casey Playground. To the East lies the City of Cambridge, the border to which is almost entirely the well-known , most of which is actually in Watertown (though commonly believed to be in Cambridge). To the west lies the more expansive city of Waltham, but there is no clear geographic feature dividing the two municipalities.

There were 14,629 households out of which 17.8% had children under the age of 18 living with them, 37.9% were married couples living together, 8.7% had a female householder with no husband present, and 49.9% were non-families. 34.1% of all households were made up of individuals and 12.4% had someone living alone who was 65 years of age or older. The average household size was 2.17 and the average family size was 2.86.

As property values within the Boston metropolitan area continue to rise, Watertown has gained in appeal as an attractive, affordable alternative to more expensive communities such as Cambridge, Brookline, Belmont, and Boston proper. Close to Soldiers Field Road and the , major arteries into downtown Boston, Watertown has easy access to both Boston nightlife and more suburban communities such as Newton. Watertown Square is the terminus of several MBTA and trackless trolley routes. The former A-Watertown line of the ran to Watertown until 1969.


*, actor [http://www.imdb.com/name/nm0048147/]
*Boston, the Boston based rock group lead by Tom Scholz, recorded the majority of the (17x) Platinum self-titled album "Boston" at the Foxglove Studio in Watertown.
*Charles Brigham, nationally known architect. Designed the rear wing of the Massachusetts State House, Maine State House, Christian Science Church in Boston and many residential buildings. His work reflects the eclecticism and historicism prevalent in the last quarter of the 19th century, initiating fusion of the complex eclectic references of the English Queen Anne revival with American colonial design. The resulting coastal New England houses of the 1880s by Brigham and other Boston architects defined the shingle style in one of the most original and distinguished epochs of American architectural history, from which other notable architects, such as Henry Hobson Richardson, emerged. He also designed the Watertown town seal.
* American Industrialist, founder of and
*John Derian, decoupage artist
*, film and TV actress, grew up in Watertown and graduated from Watertown High School
*, a minister ordained at the Watertown Unitarian Church, who, along with , and others, had an important role in .
*, PhD, grew up in Watertown, 1968 Watertown High School graduate. Faculty member at several universities, business executive, writer and teacher on international conflict management and post-conflict peacebuilding.
* attended the .
*, former wrestler (maintains a house here).Fact|date=April 2007
*, founder of and philanthropist
*, Musician, member of and former member of
*William Marchant, born in Watertown, moved to Norwood, Mass.: Class of 2008 at Norwood High School where he holds 27 state records for High School baseball; turned down minor league contract to go to Seton Hall University.
*Rocco Bittelari, artist, painter, Watertown High School Class of 1996 [http://www.rpmaximus.com R.P.Maximus]
*Ron Basile (aka Stones), artist, painter, Watertown High School Class of 1996 [http://www.akastones.com AKA Stones]
*Harout(Arthur)Ohannessian aka Captain Hook, Regionally known poker expert, has won numerous local poker titles and has cashed at the World Series of Poker on three separate occasions.Fact|date=March 2008 Has been involved in a long standing feud with since 2002 regarding a improper betting action. Watertown High School class of 1995

The Watertown High School Raiders won the Division III State Championship for basketball during the 2006–2007 season.

Watertown Raiders field hockey has won numerous state championships from the 1980s up to the present decade.