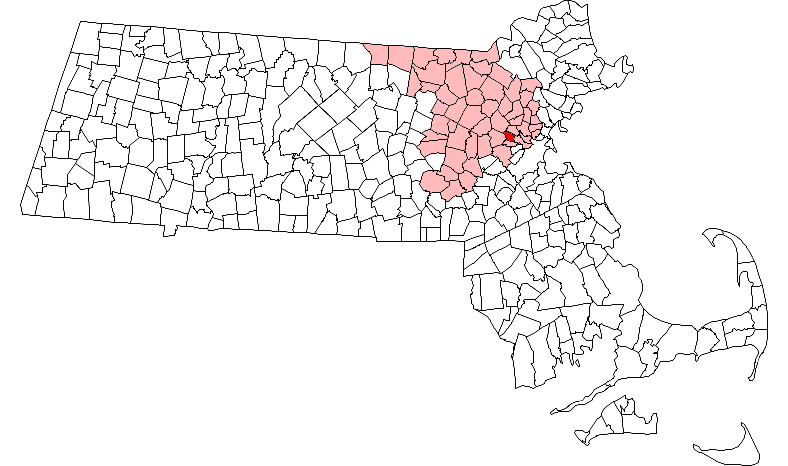 Belmont is a town in Middlesex County, , a of Boston. The population was 24,194 at the 2000 census. It is a very affluent town, with many well known celebrity and athletic figures living in it.

Belmont was founded on , by former citizens of, and land from, the bordering towns of Watertown (to the south), Waltham (to the west), and Arlington, then known as West Cambridge, (to the north). It is bordered by Cambridge (to the east). The town was named after "Bellmont", the 200 acre (0.8 km²) estate of one of the leading advocates of and largest donor to its creation, . The easternmost section of the town, including the western portion of Fresh Pond, was annexed by Cambridge in 1880 [ [http://www.cambridgema.gov/TheWorks/projects/blanchardrd/BlanchardRdDocs/LegistlativeActs/ACTS_OF_1880.pdf (17) ] ] in a dispute over a slaughterhouse licensed in 1878 [Belmont Historic District Commission, "Belmont, Massachusetts: The Architecture and Development of The Town of Homes", 1984] on Fresh Pond, so that Cambridge could protect Fresh Pond, a part of its municipal water system. Much of that area is now a major commercial and office center for the city of Cambridge.

Preceding its incorporation, Belmont was an agrarian based town, with several large farms servicing Boston for produce and livestock. It remained largely the same until the turn of the twentieth century, when trolley service and better roads were introduced, making the town more attractive as a residential area, most notably for the building of large estates.

The economics of the town shifted from purely agrarian to a commercial base: much of the flower and vegetable needs of Boston were met from the Belmont 'hothouses' which persisted until about 1983 when Edgar's, the last large greenhouse firm in the area, closedFact|date=February 2007. Other commercial enterprises in Belmont included mining and waste management. The reclamation of a large dump and quarry off Concord Avenue into sites for the Belmont High School and the Clay Pit Pond stands as a lasting example of environmental planning. With the introduction of s and s Belmont continued its transition to a commuter-based suburb throughout the twentieth century.

Belmont was the home of the headquarters of the from the organization's founding in 1958 until its relocation to in 1989. It was located at 395 Concord Avenue, next-door to the Belmont branch of the Post Office. Today the building houses the National Association for Armenian Studies and Research [http://www.commercemarketplace.com/home/naasr/] .

Belmont remains a primarily residential suburb with little growth since the 1950s. It is best known for the mansion-filled Belmont Hill neighborhood, although most residents live in more densely settled, low-lying areas around the Hill. There are three major commercial centers in the town: Belmont Center in the center, Cushing Square in the south, and Waverley Square in the west. Town Hall and other civic buildings are located in Belmont Center. Large tracts of land from former farms and greenhouse estates form public or public-accessible areas such as Rock Meadow, Habitat ( [http://www.massaudubon.org/ Mass Audubon] ), portions of the tract and various town fields.

The major roads in the town are Concord Avenue, which bisects the town from east to west, Common Street and Pleasant Street (Route 60) which travel north-south through Belmont, and Trapelo Road and Belmont Street which run along the southern edge of the town. Massachusetts Route 2 runs along the northern border of the town. Belmont is also served by the 's Fitchburg Commuter Rail line and several bus lines.

The town is home to , a and research center, and the of .

There were 9,732 households out of which 31.0% had children under the age of 18 living with them, 54.9% were married couples living together, 8.8% had a female householder with no husband present, and 33.7% were non-families. 25.9% of all households were made up of individuals and 11.9% had someone living alone who was 65 years of age or older. The average household size was 2.45 and the average family size was 3.01.

Belmont is served by the , governed by an independently elected school committee. [http://town.belmont.ma.us/Public_Documents/BelmontMA_WebDocs/govt]

There are four public elementary schools in Belmont, the Burbank, Butler, Winn Brook, and Wellington schools. Two other public elementary schools, Payson Park and Kendall, were closed in the 1970s and 1980s, respectively. The former closed after being destroyed by fire, the latter closed due to population shifts and was converted to an arts center, which was later also destroyed by fire. There is one public middle school, the Chenery Middle School, and one public high school, Belmont High School. Belmont High has an outstanding reputation for college placement; strong athletics, academics, music, and theater arts; a typical class size of about 280 students; and average SAT's for the class of 2004 of 1179.

The executive branch of the town government consists of a three-person Board of Selectmen elected by the residents. The Selectmen appoint a Town Administrator who is in charge of daily operations.

The legislative branch is a , with eight districts each electing 36 representatives, plus ex-officio members and a Town Moderator to run the annual meeting. [http://town.belmont.ma.us/Public_Documents/BelmontMA_WebDocs/govt]

Because of its proximity to Cambridge and Boston, Belmont has often had a dozen Nobel Prize winners in residence at one time or anotherFact|date=February 2007. Well-known past and present residents include: