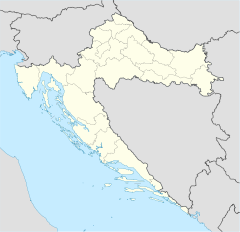 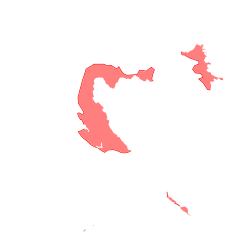 The Vukovar massacre, also known as Vukovar hospital massacre[1] or simply Ovčara, was a war crime that took place between November 20 and November 21, 1991 near the city of Vukovar, a mixed Croat/Serb community in northeastern Croatia. A mostly Croatian group of 263 men and 1 woman (including civilians and POWs), of whom 194 have been identified, were murdered by members of the Serb militias following the Yugoslav People's Army (JNA) withdrawal from Ovčara after it brought those patients there from the Vukovar hospital.[2][3] The murders occurred at the end of the Battle of Vukovar.

For their roles in orchestrating the massacre, the Yugoslav military leaders Veselin Šljivančanin and Mile Mrkšić were convicted by the International Criminal Tribunal for the Former Yugoslavia in 2007, 2009 and 2010.[4][5][6] The original indictment included a number of 264 non-Serb men killed, and a third defendant, one Miroslav Radić, who was released free of charge. In the trial against Vojislav Šešelj, the indictment listed 255 names in relation to Ovčara. The names include one woman, a 77-year old man as the oldest and a 16-year old boy as the youngest victim of the massacre. Of these, 23 were older than 49 years of age,[7] which is higher than Croatian military service age. Victims also included French volunteer Jean-Michel Nicolier and journalist Siniša Glavašević and his technician.[8]

Ovčara is a location near Vukovar, where around two hundred men prisoners from the Vukovar hospital were massacred by Serbian forces on November 20, 1991. Ovčara was also a Serbian transit camp for Croatian prisoners from October to December 1991. 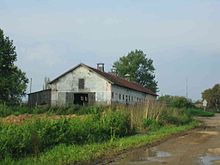 Ovčara is located 5 kilometers southeast of the city of Vukovar. It is a desolate stretch of land where the Vukovar agricultural conglomerate built cattle-raising facilities after the World War II. These facilities are storage hangars, which are fenced and can be easily guarded. The hangars are made of brick and have a big sliding front door, which includes a small door.

The Serbian forces turned Ovčara into a prison camp in early October 1991. Aside from the massacre, 3,000 to 4,000 men prisoners were temporarily held in the camp before being transported to the prison in Sremska Mitrovica or to the local army barracks, which was the transit point for the Serbian concentration camps Stajićevo, Begejci and others. Some of the Serb forces were led by Željko Ražnatović "Arkan" who directed much of the pillaging and murder that occurred in Vukovar during and after the siege.[9]

The men brought to Ovčara included wounded patients, hospital staff and some of their family members, former defenders of Vukovar, Croatian political activists, journalists and other civilians.[10][11] One member of the group standing trial in Belgrade for the executions testified that "among the prisoners, there were quite a number of civilians and wounded persons with bandaged wounds and casts", including a pregnant woman.[12] Several witnesses at the trial, former JNA soldiers, also confirmed there were civilians present at Ovčara.

The archive of the City Government of Vukovar has some testimonies of Ovčara prisoners. When they came out of the buses, they had to run between two rows of Serbian soldiers and other forces, who beat them with rifle butts, clubs and other blunt weapons.[citation needed] The beatings continued in the hangars; at least two men died from those beatings.[13] Ovčara was closed on December 25, 1991. Its total count was around 200 men killed and 64 missing prisoners.[14] 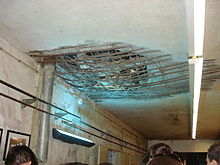 Vukovar war memorial dedicated to the men patients in Vukovar hospital which were evacuated by the JNA army, brought to and executed in Ovčara. The crater on the ceiling, where a JNA shell fell but did not explode, was left unrepaired to show what damage was done

During a cross-examination of a witness, defenders of the three men accused for the massacre claimed that members of the Serbian population were mistreated at the hospital, to the point that they were afraid of asking for help in it and wounded Yugoslav National Army soldiers were provided with inadequate care and kept in the hospital as hostages. The witness denied this claim.[15] They also claimed that after the end of the Battle of Vukovar (November 18, 1991), a number of soldiers of the Croatian National Guard went hiding in the hospital, masked as patients or staff. The witness denied this claim as well, although she said it was impossible to be certain of who was dressed how in the mass.[15]

Serbian forces captured the Vukovar hospital with the promise that the JNA would safely evacuate it following an agreement reached together with the Croatian government.[16] Serb militia failed to live up to an agreement with the Red Cross and other international observers to monitor the surrender. When the agreed time approached, an armoured Serb vehicle blocked the observers’ access across a bridge to the hospital while the prisoners were smuggled out in buses in another direction.[17]

They gathered the 300 men, among them wounded combatants and civilians alike, put them in buses and transported them to Ovčara. Many were beaten, until they were taken to a wooded ravine away from the town. The soldiers and paramilitary fighters then killed the majority of men prisoners, executing them by firearms. The bodies were then mostly thrown in a trench and covered by earth (a bulldozer was used to bury them in a mass grave). Among the dead was a French combatant who was regarded as a mercenary.[18] 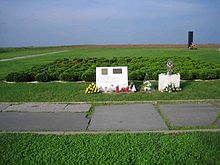 The Ovčara mass grave lies northeast from the facilities, one kilometer from the Ovčara-Grabovo road. It belongs to the category of the mass graves with the remains of men prisoners of war and civilians executed in the immediate vicinity or at the very place of the grave. Exhumation started on September 1, 1996 and lasted 40 days. 200 bodies were found, of which 194 were identified. Among those executed were Croatian Radio Vukovar journalist Siniša Glavašević and his technician, both civilians.[8]

Pursuant to the Act for Marking Mass Graves from the Croatian War of Independence, passed by the Croatian Parliament in 1996, the Ovčara Monument was the first such monument. Made by Slavomir Drinković and uncovered on December 29, 1998, it is a grey obelisk with a sculpted dove and the inscription:

In remembrance of 200 wounded Croatian men defenders and civilians from the Vukovar hospital who were executed in the Greater Serbian aggression against the Republic of Croatia.

There is also a memorial centre near the site of the massacre.[19]

On or about November 21, 1991 Serb forces removed approximately 255 men, Croats and other non-Serbs from Vukovar Hospital in the aftermath of the Serb take-over of the city. The victims were transported to the Ovcara farm located about 5 kilometers south of Vukovar. There, members of the Serb forces beat and tortured the victims for hours. During the evening of November 21, 1991 the soldiers transported the victims in groups of 10-20 to a remote execution site between the Ovcara farm and Grabovo, where they shot and killed them. Their bodies were buried in a mass grave.[20]

— War Crimes Indictment against Milosevic and others

The ICTY indicted a total of seven people for their role in the massacre.

Jovica Stanišić and Franko Simatović were also initially indicted for the Vukovar massacre, but due to lack of evidence the Tribunal redacted their charges for that specific case in the second, amended indictment.[26]

The prisoners of war were left in the custody of the Vukovar Territorial Defence who were at the time under the command of Miroljub Vujović. The prisoners were then taken by Territorial Defence and paramilitary forces in small groups to an isolated location and shot. Their bodies were buried there in a mass grave that had been dug earlier that day. The grave remained undiscovered until almost one year later, and the exhumation process did not begin until 1996. 200 bodies were exhumed.

— The ICTY in its verdict against Mile Mrkšić[27] 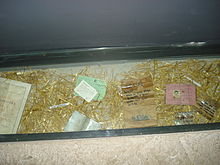 Ovčara memorial: documents and personal belongings of the victims who died in Ovčara in 1991.

The bill of indictment says that the accused, as members of the Territorial Defense of Vukovar which was formerly a part of the Yugoslav armed forces along with JNA, or as members of the volunteer corps called Leva Supoderica, organized and ordered murders and inhuman acts against the imprisoned men members of armed forces and other men included in armed forces or following armed forces and took the life of 192 men and buried them, at the agricultural property in Ovčara near Vukovar, on November 20–21, 1991 (from the afternoon to the early morning). The trial ended in 2005 and 15 were found guilty with sentences 5 to 20 years and two acquitted. However, the Serbian Supreme Court nullified the verdict and the case is being retried.[11][28]

Apology from the Serbian government

In 2010, President Boris Tadic of Serbia became the first Serbian leader to visit the site and apologize for the atrocity.[31] Tadic was accompanied to the site by Ivo Josipovic and stated: "By acknowledging the crime, by apologising and regretting, we are opening the way for forgiveness and reconciliation."[32]