During the War in Bosnia and Herzegovina, Operation Bøllebank (Danish for "Hooligan Bashing", name given after the incident) was the largest combat operation by Danish forces since 1864. In late April 1994 a Danish contingent on peacekeeping duty in Bosnia, as part of UNPROFORs Nordic battalion (Nordbat 2) located in Tuzla, was ambushed, when trying to relieve a Swedish observation post, Tango 2, that was under heavy artillery fire by the Bosnian Serb Šekovići brigade at the village of Kalesija, but the ambush was dispersed when the UN forces retaliated with heavy fire.

The ambush started by grenade attacks near Saraci, 8 km southeast from Tuzla, which were ignored. The column, however, came under attack by anti-tank missiles when they reached the village of Kalesija, further east. The UNPROFOR column requested air support, which was rejected. Due to restrictive rules of engagement imposed by the United Nations, Lt. Colonel Lars R. Møller was hesitant, but decided to return fire. The attack on them ceased after this, but intensified again later, provoking an even stronger response.

The seven German-made Leopard 1A5 tanks fired 72 rounds and destroyed several Serb artillery pieces, an ammunition dump and several bunkers. Serb forces brought T-55 tanks to the scene, but apparently the Danes did not engage them, as they made no offensive moves. The Leopards, however, fired 19 armour-piercing rounds. The Danes could see in their thermal tank sights that the guns on the T-55s were cold and therefore had not taken part in the engagement according to a non-official report.[3] However, another source claims that, despite the UNPROFOR rules of engagement, the three T-55 were actually hit by the Leopards. [4] 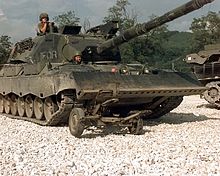 This was the first time a Leopard 1 fired its guns in anger and is one of the largest engagements that took place between UNPROFOR forces and military units involved in the war in Bosnia. It was also the first time since WWII that Danish soldiers were involved in combat operations.

The commander characterized the incident with the words: "the mouse that ate the cat".

Another incident took place later that year between Danish peacekeepers and Serb forces near Gradacac, in the course of the so called Operation Amanda.