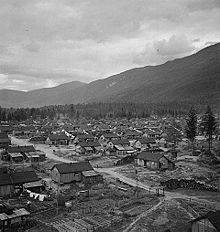 Internment is the imprisonment or confinement[1] of people, commonly in large groups, without trial. The Oxford English Dictionary (1989) gives the meaning as: "The action of 'interning'; confinement within the limits of a country or place." Most modern usage is about individuals, and there is a distinction between internment, which is being confined usually for preventive or political reasons, and imprisonment, which is being closely confined as a punishment for crime.

Internment also refers to the practice of neutral countries in time of war in detaining belligerent armed forces and equipment in their territories under the Second Hague Convention.[2]

Early civilizations such as Assyria used forced resettlement of populations as a means of controlling territory,[3] but it was not until much later in the late 19th and 20th centuries that records exist of groups of civilian non-combatants being concentrated into large prison camps.

The Universal Declaration of Human Rights restricts the use of internment. Article 9 states that "No one shall be subjected to arbitrary arrest, detention or exile."

An internment camp is a large detention center created for political opponents, enemy aliens, people with mental illness, members of specific ethnic or religious groups, civilian inhabitants of a critical war-zone, or other groups of people, usually during a war. The term is used for facilities where the inmates were selected by some generalized criteria, rather than detained as individuals after due process of law fairly applied by a judiciary.

As a result of the mistreatment of civilians interned during recent conflicts, the Fourth Geneva Convention was established in 1949 to provide for the protection of civilians during times of war "in the hands" of an enemy and under any occupation by a foreign power.[4] It was ratified by 194 nations. Prisoner-of-war camps are internment camps intended specifically for holding members of an enemy's armed forces as defined in the Third Geneva Convention, and the treatment of whom is specified in that Convention. 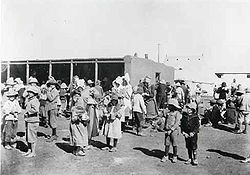 The Random House Dictionary defines the term "concentration camp" as: "a guarded compound for the detention or imprisonment of aliens, members of ethnic minorities, political opponents, etc.", and, the American Heritage Dictionary defines it as: "A camp where civilians, enemy aliens, political prisoners, and sometimes prisoners of war are detained and confined, typically under harsh conditions."

Earliest usage of concentration camps and origins of the term

Polish historian Władysław Konopczyński has suggested the first concentration camps were created in Poland in the 18th century, during the Bar Confederation rebellion, when the Russian Empire established three concentration camps for Polish rebel captives awaiting deportation to Siberia.[5]

The earliest of these camps may have been those set up in the United States for Cherokee and other Native Americans in the 1830s; however, the term originated in the reconcentrados (reconcentration camps) set up by the Spanish military in Cuba during the Ten Years' War (1868–1878) and by the United States during the Philippine–American War (1899–1902).[6]

The English term "concentration camp" grew in prominence during the Second Boer War (1899–1902), when they were operated by the British in South Africa.[6][7]

There were a total of 45 tented camps built for Boer internees and 64 for black Africans. Of the 28,000 Boer men captured as prisoners of war, 25,630 were sent overseas. The vast majority of Boers remaining in the local camps were women and children. 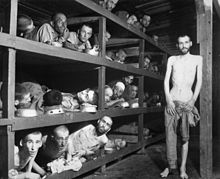 During the 20th century, the arbitrary internment of civilians by the state reached a climax with Nazi concentration camps (1933–1945). As a result, the term "concentration camp" carries many of the connotations of "death camp" or "extermination camp", and is sometimes used synonymously.

However, even Nazi concentration camps were not necessarily death camps. For example, some camps were sources of slave labor: the inmates were exploited rather than killed, although many were worked to death or killed for refusing to work.

Because of these negative connotations, the term "concentration camp", originally itself a euphemism, has been replaced by newer euphemisms such as internment camp, resettlement camp, and detention facility, regardless of the actual circumstances of these camps, which vary a great deal.