Bronze
This article is about the metal alloy. For other uses, see Bronze (disambiguation). 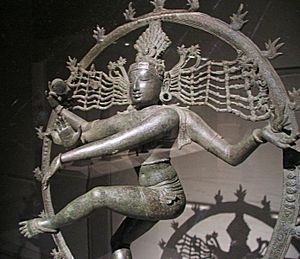 Bronze Chola statue of Nataraja from India at the Metropolitan Museum of Art, New York City

Bronze is a metal alloy consisting primarily of copper, usually with tin as the main additive. It is hard and brittle, and it was particularly significant in antiquity, so much so that the Bronze Age was named after the metal. However, since "bronze" is a somewhat imprecise term, and historical pieces have variable compositions, in particular with an unclear boundary with brass, modern museum and scholarly descriptions of older objects increasingly use the more cautious and inclusive term "copper alloy" instead.[1]

The word Bronze is believed to be cognate with the Italian: bronzo and German: brunst, perhaps ultimately taken from the Persian word for brass, birinj; or possibly from the Latin name of the city of Brindisi (aes Brundusinum—Pliny).[2] 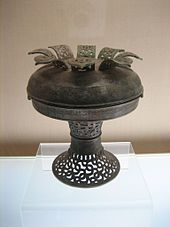 Chinese pu vessel with interlaced dragon design, Spring and Autumn Period (722 BC-481 BC)

The discovery of bronze enabled people to create metal objects which were better than previously possible. Tools, weapons, armor, and various building materials, like decorative tiles, made of bronze were harder and more durable than their stone and copper ("Chalcolithic") predecessors. Initially bronze was made out of copper and arsenic to form arsenic bronze. It was only later that tin was used, becoming the sole type of bronze in the late 3rd millennium BC. Tin bronze was superior to arsenic bronze in that the alloying process itself could more easily be controlled (as tin was available as a metal) and the alloy was stronger and easier to cast. Also, unlike arsenic, tin is not toxic.

The earliest tin-alloy bronzes date to the late 4th millennium BC in Susa (Iran) and some ancient sites in China, Luristan (Iran) and Mesopotamia (Iraq).

Copper and tin ores are rarely found together (exceptions include one ancient site in Thailand and one in Iran), so serious bronze work has always involved trade. In Europe, the major source for tin was Great Britain's deposits of ore in Cornwall, which were traded as far as Phoenicia in the Eastern Mediterranean.

Though bronze is generally harder than wrought iron, with Vickers hardness of 60–258[3] vs. 30–80,[4] the Bronze Age gave way to the Iron Age; this happened because iron was easier to find and easier to process. Bronze was still used during the Iron Age, for example officers in the Roman army had bronze swords[citation needed] while foot soldiers had iron, but, for many purposes, the weaker wrought iron was found to be sufficiently strong. Archaeologists suspect that a serious disruption of the tin trade precipitated the transition. The population migrations around 1200–1100 BC reduced the shipping of tin around the Mediterranean (and from Great Britain), limiting supplies and raising prices.[5] As ironworking improved, iron became cheaper; and as cultures advanced from wrought iron to forged iron, they learned how to make steel, which is stronger than bronze and holds a sharper edge longer.[6]

There are many different bronze alloys but modern bronze is typically 88% copper and 12% tin.[7] Alpha bronze consists of the alpha solid solution of tin in copper. Alpha bronze alloys of 4–5% tin are used to make coins, springs, turbines and blades. Historical "bronzes" are highly variable in composition, as most metalworkers probably used whatever scrap was to hand; the metal of the 12th century English Gloucester Candlestick is bronze containing a mixture of copper, zinc, tin, lead, nickel, iron, antimony, arsenic with an unusually large amount of silver - between 22.5% in the base and 5.76% in the pan below the candle. The proportions of this mixture may suggest that the candlestick was made from a hoard of old coins. The Benin Bronzes are really brass, and the Romanesque Baptismal font at St Bartholomew's Church, Liège is described as both bronze and brass.

Commercial bronze (90% copper and 10% zinc) and Architectural bronze (57% Copper, 3% Lead, 40% Zinc) are more properly regarded as brass alloys because they contain zinc as the main alloying ingredient. They are commonly used in architectural applications.[8][9]

Bismuth bronze is a bronze alloy with a composition of 52% copper, 30% nickel, 12% zinc, 5% lead, 1% bismuth. It is able to hold a good polish and so is sometimes used in light reflectors and mirrors.[10] 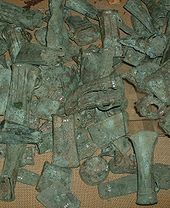 Bronze is considerably less brittle than iron. Typically bronze only oxidizes superficially; once a copper oxide (eventually becoming copper carbonate) layer is formed, the underlying metal is protected from further corrosion. However, if copper chlorides are formed, a corrosion-mode called "bronze disease" will eventually completely destroy it.[11] Copper-based alloys have lower melting points than steel or iron, and are more readily produced from their constituent metals. They are generally about 10 percent heavier than steel, although alloys using aluminum or silicon may be slightly less dense. Bronzes are softer and weaker than steel—bronze springs, for example, are less stiff (and so store less energy) for the same bulk. Bronze resists corrosion (especially seawater corrosion) and metal fatigue more than steel and is also a better conductor of heat and electricity than most steels. The cost of copper-base alloys is generally higher than that of steels but lower than that of nickel-base alloys.

Copper and its alloys have a huge variety of uses that reflect their versatile physical, mechanical, and chemical properties. Some common examples are the high electrical conductivity of pure copper, the excellent deep drawing qualities of cartridge case brass, the low-friction properties of bearing bronze, the resonant qualities of bell bronze, and the resistance to corrosion by sea water of several bronze alloys.

The melting point of Bronze varies depending on the actual ratio of the alloy components and is about 950 °C (1,742 °F). 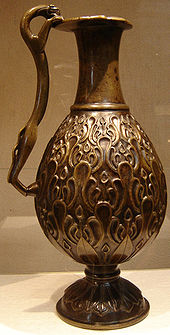 Bronze was especially suitable for use in boat and ship fittings prior to the wide employment of stainless steel owing to its combination of toughness and resistance to salt water corrosion. Bronze is still commonly used in ship propellers and submerged bearings.

In the twentieth century, silicon was introduced as the primary alloying element, creating an alloy with wide application in industry and the major form used in contemporary statuary. Sculptors may prefer silicon bronze because of the ready availability of silicon bronze brazing rod, which allows color-matched repair of defects in castings. Aluminum is also used for the structural metal aluminum bronze.

It is also widely used for cast bronze sculpture. Many common bronze alloys have the unusual and very desirable property of expanding slightly just before they set, thus filling in the finest details of a mold. Bronze parts are tough and typically used for bearings, clips, electrical connectors and springs.

Spring bronze weatherstripping comes in rolls of thin sheets and is nailed or stapled to wood windows and doors. There are two types, flat and v-strip. It has been used for hundreds of years because it has low friction, seals well and is long lasting. It is used in building restoration and custom construction.

Bronze also has very low metal-on-metal friction, which made it invaluable for the building of cannon where iron cannonballs would otherwise stick in the barrel.[citation needed] It is still widely used today for springs, bearings, bushings, automobile transmission pilot bearings, and similar fittings, and is particularly common in the bearings of small electric motors. Phosphor bronze is particularly suited to precision-grade bearings and springs. It is also used in guitar and piano strings.

Unlike steel, bronze struck against a hard surface will not generate sparks, so it (along with beryllium copper) is used to make hammers, mallets, wrenches and other durable tools to be used in explosive atmospheres or in the presence of flammable vapors.

Bronze is used to make bronze wool for woodworking applications where steel wool would discolor oak.

Indian Hindu artisans from the period of the Chola empire in Tamil Nadu, used bronze to create intricate statues via the lost wax casting method with ornate detailing depicting the Gods of Hinduism mostly, but also the lifestyle of the period. The art form survives to this day, with many silpis, craftsmen, working in the areas of Swamimalai and Chennai.

In antiquity other cultures also produced works of high art using bronze. For example: in Africa, the bronze heads of the Kingdom of Benin; in Europe, Grecian bronzes typically of figures from Greek mythology; in east Asia, Chinese bronzes of the Shang and Zhou dynasty — more often ceremonial vessels but including some figurine examples.

Bronze continues into modern times as one of the materials of choice for monumental statuary.

Bronze is the most popular metal for top-quality bells, particularly bell metal, which is about 23% tin.

Nearly all professional cymbals are made from a bronze alloy. The alloy used in drum kit cymbal bronze is unique in the desired balance of durability and timbre.

Modern cymbals consist of several types of bronze, the most common being B20 bronze, which is roughly 20% tin, 80% copper, with traces of silver. Zildjian and Sabian use this alloy for their professional lines. A Swiss company, Paiste, uses a softer B8 bronze which is made from 8% tin and 92% copper in nearly all of their cymbals. Zildjian and Sabian use this metal too, in their budget priced cymbals.

Bronze is also used for the windings of steel strings of various stringed instruments such as the double bass, piano, harpsichord, and the guitar, replacing former gut and nylon strings. Bronze strings are commonly reserved on pianoforte for the lower pitch tones, as they possess a superior sustain quality to that of high-tensile steel.[14]

Bronzes of various metallurgical properties are widely used in struck idiophones around the world, notably in South East Asia, and most famously for the Javanese gamelan and other glockenspiel-like musical instruments. The earliest bronze archeological finds in Indonesia date from 1–2 BCE, including flat plates probably suspended and struck by a wooden or bone mallet.[14][15]

Some companies are now making saxophones from phosphor bronze (3.5 to 10% tin and up to 1% phosphorus content).

A large bronze cast medallion, some 9.5 by 8.7 centimetres in measurement, created by the celebrated medalist Valerio Belli in the sixteenth century.

Bronze has been used in the manufacture of various types of medals for centuries, and are known in contemporary times for being awarded to the second-runner up in sporting competitions and other events. The later usage was in part attributed to the choices of Gold, Silver and Bronze to represent the first three Ages of Man in Greek mythology: the Golden Age, when men lived among the gods; the Silver age, where youth lasted a hundred years; and the Bronze Age, the era of heroes, and was first adopted at the 1904 Summer Olympics. At the 1896 event, silver was awarded to winners and bronze to runners-up, while at 1900 other prizes were given, not medals. 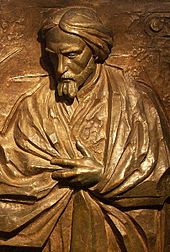 Fragment of the grave of Cyprian Kamil Norwid in the Bards' crypt in Wawel Cathedral, Kraków, Poland by sculptor Czesław Dźwigaj