:"Brindisi can also refer to a song in which a company is exhorted to drink, such as the "Tea-Cup Brindisi" in 's "", or the duet "" in Verdi's "".":"For the Argentine actor see ."Infobox CityIT
official_name = Comune di Brindisi 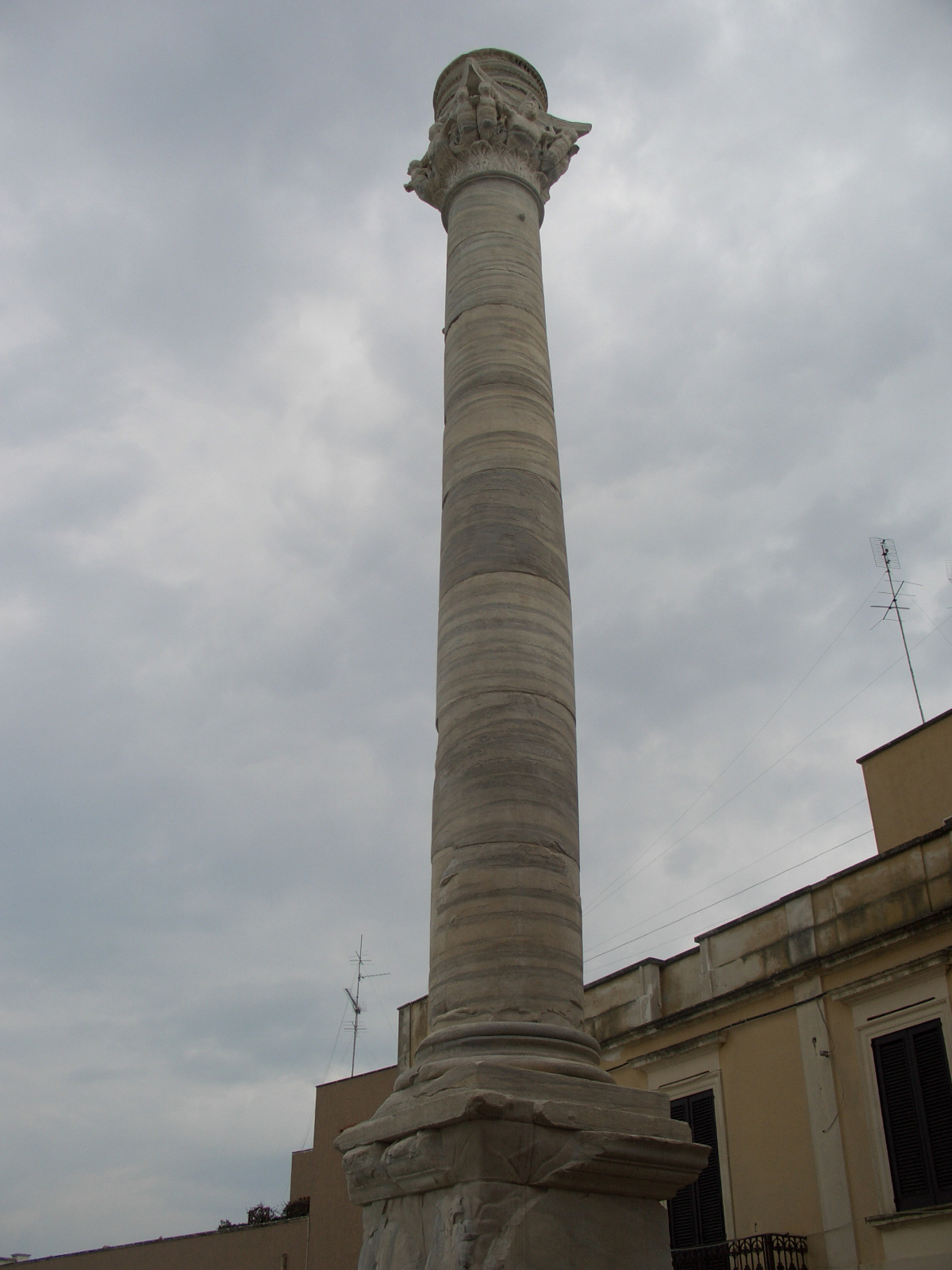 Brindisi ( _el. "Brentèsion" or "Vrindhision"; _la. Brundisium; Messapian: "Brention") is an ancient in the Italian region of , the capital of the .

There are several traditions concerning its founders; one of them claims that it was founded by the legendary hero .

Brindisi was probably an settlement predating the Roman expansion. The Latin name "Brundisium", through the Greek "Brentesion", is a corruption of the Messapian "Brention" meaning "deer's head" (cf. Albanian "bri, brî" "horn") and probably refers to the shape of the natural harbor. As a Messapic center, Brindisi was in conflict with and in friendly relations with . In 267 BCE (245 BCE, according to other sources) it was conquered by the Romans. [cite web
title=Brundisium (Brindisi) Puglia, Italy
work=Perseus Digital Library
url=http://icarus.umkc.edu/sandbox/perseus/pecs/page.823.a.php
accessdate=2006-04-19] After the it became a major center of Roman naval power and maritime trade. In the Social War it received Roman citizenship, and was made a free port by Sulla. It suffered, however, from a siege conducted by Caesar in 49 BCE ("Bell. Civ. i.") and was again attacked in 42 and 40 BCE.

The poet was born here about 220 BCE, and here the famous poet died in 19 BCE. Under the Romans, Brundisium - a large city in its day with some 100,000 inhabitants - was an active port, the chief point of embarkation for and the East, via Dyrrachium or . It was connected with Rome by the and the .

Later Brindisi was conquered by , and reconquered by the in the 6th century CE. In 674 it was destroyed by the led by Romuald I of Benevento, but such a fine natural harbor meant that the city was soon rebuilt. In the 9th century, a Saracen settlement existed in the neighborhood of the city, which had been stormed in 836 by pirates. Again a Byzantine possession, it was captured by the in 1070, and subsequently became part of the under its various dynasties. Like other Pugliese ports, Brindisi for a short while was ruled by Venice, but was soon reconquered by .

Brindisi fell to n rule in 1707-1734, and afterwards to the . Between September 1943 and February 1944 the city functioned as the temporary capital of Italy.

Brindisi is also noteworthy because it hosted King , and a part of the Italian army command in September 1943 after the .

In the 21st century, Brindisi serves as the home base of the San Marco Regiment, a naval brigade originally known as the La Marina Regiment. It was renamed San Marco after its noted defense of Venice at the start of . [cite web
title=Kosovo Force: San Marco
work=KFOR Chronicle
url=http://www.nato.int/kfor/chronicle/2002/chronicle_16b/10.htm
accessdate=2006-04-19]

*The "Castello Svevo" or "Castello Grande" (" Castle" or "Large Castle"), built by emperor Frederick II. It has a plan with massive square towers. The Aragonese added four towers to the original 13th century structure. After centuries of being abandon, in 1813 turned it into a penitentiary; after 1909 it is used by the . During , it was briefly the residence of King .
*The Aragonese Castle, best known as "Forte a Mare" ("Sea Fort"). I was built by King in 1491 on the S. Andrea island facing the port. It is divided into two section: the "Red Castle" (from the color of its bricks) and the more recent Fort.
*Two ancient Roman columns, symbols of Brindisi. They were once thought to be mark the ending points of the , instead they were used as a port reference for the antique mariners. Only one of the two, standing at 18.74 m, is now visible. The other crumbled in 1582, and only the basement survives.
*the "Duomo" (Cathedral), built in Romanesque style in the 11th-12th centuries. What is visible today is the 18th century reconstruction, after the original was desotryed by an earthquake on . Parts of the original mosaic pavement can be seen in the interior.
*Church of "Santa Maria del Casale" (c. 1300), in Gothic-Romanesque style. The notable façade has a geometrical pattern of gray and yellow stones, with an entrance cusp-covered portico. The interior has notable early-14th century frescoes.
*Portico of the Templars (13th century). Despite the name, it was in reality the of the bishop's palace. It is now the entrance to the .
*the "Fontana Grande" (Grand Fountain), built by the Romans on the Appian Way. It was restored in 1192 by .
*"Piazza della Vittoria" (Victory Square). It has a 17th century fountain.
*Church of "Santa Maria degli Angeli" (1609).
*Church of the Holy Heart.
*Church of "San Giovanni al Sepolcro", with circular plan, dating from the 12th century.
*Church of the "Santissima Trinità" (or "Santa Lucia", 14th century). It has a late 12th century .
*Natural preserve of "Torre Guaceto"
*the [http://it.wikipedia.org/wiki/Monumento_al_Marinaio_d'Italia Monument to Italian Sailors]

Brindisi is home to the Papola-Casale Airport, located 6 km outside the city's center. Brindisi is also a major ferry port, with routes to Greece and elsewhere. [cite web
title=Greek ferries to Greece and the Greek islands
work=Greek Ferries Club
url=http://www.greekferries.gr/
accessdate=2006-04-19]