Misnagdim
This article is about the historical Rabbinic opposition to Hasidism from the 1700s, centred in Lithuania. For the full history and spirituality of the non-Hasidic stream of Eastern European Haredi Judaism, see Lithuanian Jews main article 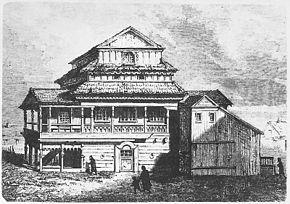 Synagogue in Jurbarkas. Lithuania was the Misnagdic heartland, with Vilna a "Jerusalem" for other Talmudic strongholds. Hasidim and Misnagdim diverged as two interpretations within Rabbinic Judaism: Misnagdim believed in Kabbalah, as Lurianic Kabbalah replaced "Rationalist" Medieval philosophical method as complete structure of theology in traditional development until today.[1] However, Misnagdic Kabbalistic study and practice remained traditionally restricted to elite, with popular devotion in intellectual Talmudic rigour and later Ethics. Hasidism popularised mysticism in new psychology for the masses. Conversely, mastery of Rabbinic literature and Talmud could be found in both camps,[2] as scholars were also attracted to Hasidic philosophy. Lithuanian-"Yeshiva" and Hasidic paths continue today as the two reconciled alternative streams in Eastern European Judaism

Misnagdim or Mitnagdim is a Hebrew word (מתנגדים) meaning "opponents". It is the plural of misnaged or mitnaged. Most prominent among the Misnagdim was Rabbi Elijah (Eliyahu) ben Shlomo Zalman (1720–1797), commonly known as the Vilna Gaon or the Gra. The term "Misnagdim" gained a common usage among European Jews as the term that referred to Ashkenazi Jews who opposed the rise and spread of early Hasidic Judaism, particularly as embodied by Hasidism's founder, Rabbi Yisroel (Israel) ben Eliezer (1698–1760), who was known as the Baal Shem Tov or BESHT.

Rabbi Chaim Volozhin was the chief follower and disciple of the Vilna Gaon and founded a yeshiva in Volozhin - often referred to as the "Mother of the Yeshivas" - to which most Litvish ("Lithuanian") yeshivas can be traced.

A large group of Misnagdim and their families, numbering over 500, were inspired by the Vilna Gaon to settle in Palestine between 1809 and 1812. They are known as Perushim.

The rapid spread of Hasidism in the second half of the 18th century greatly troubled many traditional rabbis; many saw it as a potentially dangerous enemy. They felt that it was another manifestation of the recent messianic movement of Sabbatai Zevi (1626–1676) that had led many Jews away from mainstream Judaism.

Hasidism's founder was Rabbi Israel ben Eliezer, known as the Baal Shem Tov ("master of a good name" usually applied to a saintly Jew who was also a wonder-worker), or simply "the Besht"; he taught that man's relationship with God depended on immediate religious experience, in addition to knowledge and observance of the details of the Torah and Talmud.

Much of Judaism was still fearful of the messianic movements of the Sabbateans and the Frankists (followers of the messianic claimant Jacob Frank (1726–1791)). Many rabbis suspected Hasidism of an intimate connection with these movements.

The characteristically "Lithuanian" approach to Judaism was marked by a concentration on highly intellectual Talmud study. Lithuania became the heartland of the traditionalist opposition to Hasidism, to the extent that in popular perception "Lithuanian" and "misnaged" became virtually interchangeable terms. In fact, however, a sizable minority of Lithuanian Jews belong(ed) to Hasidic groups, including Chabad, Slonim, Karlin (Pinsk) and Koidanov.

Opposition of the Vilna Gaon

The first attacks on Hasidic Judaism came during the times of the founder of Hasidic thought. Two bans of excommunication against Hasidic Jews first appeared in 1772, accompanied by the public ripping up of several early Hasidic pamphlets. The Vilna Gaon, Elijah ben Solomon Zalman, galvanized opposition to Hasidic Judaism. He believed that the claims of miracles and visions made by Hasidic Jews were lies and delusions. A key point of opposition was that the Vilna Gaon maintained that greatness in Torah and observance must come through natural human efforts at Torah study without relying on any external "miracles" and "wonders", whereas the Ba'al Shem Tov was more focused on bringing encouragement and raising the morale of the Jewish people, especially following the Chmelnitzki pogroms (1648–1654) and the aftermath of disillusionment in the Jewish masses following the millennial excitement heightened by the failed messianic claims of Sabbatai Zevi and Jacob Frank. Opponents of Hasidim held that Hasidim viewed their rebbes in an idolatrous fashion.

Most of the changes made by the Hasidim were the product of the Hasidic approach to Kabbalah, particularly as expressed by Rabbi Isaac Luria (1534–1572), known as "the ARI" and his disciples, particularly Rabbi Chaim Vital (1543–1620). Both Misnagdim and chassidim were greatly influenced by the ARI, but the legalistic Misnagdim feared in chassidism what they perceived as disturbing parallels to the Sabatean movement. An example of such an idea was the concept that the entire universe is completely nullified to God. Depending on how this idea was preached and interpreted, it could give rise to pantheism, universally acknowledged as a heresy, or lead to immoral behavior, since elements of Kabbalah can be misconstrued to de-emphasize ritual by rote and glorifies sexual metaphors as a deeper means of grasping some inner hidden notions in the Torah based on the Jews' intimate relationship with God.

The stress of prayer over study, and the Hasidic reinterpretation of Torah l'shma (Torah study for its own sake), was seen as a rejection of the traditional Jewish views.

Hasidic Jews also added some halakhic stringencies on Kashrus, the laws of keeping kosher. They made certain changes in how livestock were slaughtered and in who was considered a reliable mashgiach (supervisor of kashrut). The end result was that they essentially considered some kosher food as less stringent. This was seen as a change of traditional Judaism, and an over stringency of halakha (Jewish law), and, again, a breach of communal unity.

A bitter struggle soon arose between traditional observant Jews and the newer Hasidim. At the head of the Orthodox party stood the Vilna Gaon. In 1772, when the first secret circles of Hasidim appeared in Lithuania, the rabbinic kahal ("council") of Vilna, with the approval of Rabbi Elijah ben Solomon, arrested the local leaders of the sect, and excommunicated its adherents. Letters were sent from Vilna to the rabbis of other communities calling upon them to make war upon the "godless sect."

In many places persecutions were instituted against the Hasidim. The appearance in 1780 of the first works of Hasidic literature created alarm among the Orthodox. At the council of rabbis held in the village of Zelva, Trakai Voivodeship, in 1781, it was resolved to uproot Hasidism. In the official letters issued by the council, the faithful were ordered to expel the Hasidim from every Jewish community, to regard them as members of another faith, to hold no social intercourse with them, not to intermarry with them, and not to bury their dead.

Hasidism in the south of eastern Europe had established itself so firmly in the various communities that it had no fear of persecution. The main sufferers were the northern Hasidim. Their leader, Hasidic Rabbi Shneur Zalman of Liadi (1745–1812), the founder of Chabad Hasidism, attempted to allay the anger of the Misnagdim and of Elijah Gaon.

On the death of the latter in 1797 the exasperation of the Misnagdim became so great that they resolved to libel and denounce the leaders of the Hasidim to the Russian government as dangerous agitators and teachers of heresy. In consequence twenty-two Hasidic Jews were arrested in Vilna and other places. Rabbi Shneur Zalman of Liadi was arrested at his court in Liozna and brought to St. Petersburg (1798). Chabad Hasidim still celebrate the day of his liberation from prison.

The struggle of Misnagdim with Hasidism in Lithuania and White Russia led to the formation of the latter sect in those regions into separate religious organizations; these existing in many towns alongside of those of the Misnagdim. In the south-western region the Hasidim almost completely crowded out the Misnagdim. Lithuania remained strongly Misnagdic. Another group of non-Hasidic Jews were the Oberlander Jews of Hungary and Slovakia, who were not Misnagdim.

Winding down the battles

By the mid-19th century most of non-Hasidic Judaism had discontinued its struggle with Hasidism and had reconciled itself to the establishment of the latter as a fact.