Daresbury is a small rural village, civil parish and ward in the unitary authority of Halton and part of the ceremonial county of Cheshire, England. It is covered by the Weaver Vale constituency. At the 2001 Census, the population of the parish was 216,[1] with a total ward population of 3,906.[2] 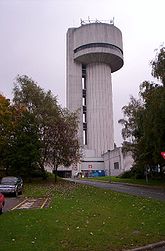 The Tower at Daresbury Laboratory

The most notable attributes of Daresbury are that it was the birthplace (some 1.5 miles south of the village) of Alice's Adventures in Wonderland author Lewis Carroll (real name Charles Dodgson), and that the Science and Technology Facilities Council Daresbury Laboratory had a synchrotron research facility called the Synchrotron Radiation Source, closed in August 2008.

Controversy arose in the late 1990s when Diamond, a new synchrotron light source planned to be built at the Laboratory, went instead to the Rutherford Appleton Laboratory, near Didcot in Oxfordshire.

Daresbury has become a place of pilgrimage because of the Lewis Carroll association. The parish church has a Lewis Carroll window.

In 2006, the annual Creamfields dance festival was held in Daresbury after relocating from the disused Liverpool airport site it had occupied for the 6 previous years. This saw 40,000 revellers partying from 3pm-6am to a line-up that included live performances from The Prodigy and Zutons, as well as DJ sets from the likes of Sasha, Paul Oakenfold, 2 Many DJ's, Green Velvet and DJ Shadow. The festival was repeated in 2007 and 2008, and it is anticipated that it will be an annual occurrence in the village.

Daresbury is also an electoral ward. However, the boundary of the ward is different from (and larger than) the parish boundary, and includes the parishes of Moore, Halton and Preston Brook.