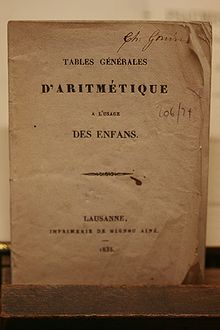 Arithmetic or arithmetics (from the Greek word ἀριθμός, arithmos “number”) is the oldest and most elementary branch of mathematics, used by almost everyone, for tasks ranging from simple day-to-day counting to advanced science and business calculations. It involves the study of quantity, especially as the result of combining numbers. In common usage, it refers to the simpler properties when using the traditional operations of addition, subtraction, multiplication and division with smaller values of numbers. Professional mathematicians sometimes use the term (higher) arithmetic[1] when referring to more advanced results related to number theory, but this should not be confused with elementary arithmetic.

The prehistory of arithmetic is limited to a small number of artifacts which may indicate conception of addition and subtraction, the best-known being the Ishango bone from central Africa, dating from somewhere between 20,000 and 18,000 BC although its interpretation is disputed.[2]

The earliest written records indicate the Egyptians and Babylonians used all the elementary arithmetic operations as early as 2000 BC. These artifacts do not always reveal the specific process used for solving problems, but the characteristics of the particular numeral system strongly influence the complexity of the methods. The hieroglyphic system for Egyptian numerals, like the later Roman numerals, descended from tally marks used for counting. In both cases, this origin resulted in values that used a decimal base but did not include positional notation. Complex calculations with Roman numerals required the assistance of a counting board or the Roman abacus to obtain the results.

Early number systems that included positional notation were not decimal, including the sexagesimal (base 60) system for Babylonian numerals and the vigesimal(base 20) system that defined Maya numerals. Because of this place-value concept, the ability to reuse the same digits for different values contributed to simpler and more efficient methods of calculation.

The continuous historical development of modern arithmetic starts with the Hellenistic civilization of ancient Greece, although it originated much later than the Babylonian and Egyptian examples. Prior to the works of Euclid around 300 BC, Greek studies in mathematics overlapped with philosophical and mystical beliefs. For example, Nicomachus summarized the viewpoint of the earlier Pythagorean approach to numbers, and their relationships to each other, in his Introduction to Arithmetic.

Greek numerals, derived from the hieratic Egyptian system, also lacked positional notation, and therefore imposed the same complexity on the basic operations of arithmetic. For example, the ancient mathematician Archimedes devoted his entire work The Sand Reckoner merely to devising a notation for a certain large integer.

The gradual development of Hindu-Arabic numerals independently devised the place-value concept and positional notation, which combined the simpler methods for computations with a decimal base and the use of a digit representing zero. This allowed the system to consistently represent both large and small integers. This approach eventually replaced all other systems. In the early 6th century AD, the Indian mathematician Aryabhata incorporated an existing version of this system in his work, and experimented with different notations. In the 7th century, Brahmagupta established the use of zero as a separate number and determined the results for multiplication, division, addition and subtraction of zero and all other numbers, except for the result of division by zero. His contemporary, the Syriac bishop Severus Sebokht described the excellence of this system as "...valuable methods of calculation which surpass description". The Arabs also learned this new method and called it hesab.

Although the Codex Vigilanus described an early form of Arabic numerals (omitting zero) by 976 AD, Fibonacci was primarily responsible for spreading their use throughout Europe after the publication of his book Liber Abaci in 1202. He considered the significance of this "new" representation of numbers, which he styled the "Method of the Indians" (Latin Modus Indorum), so fundamental that all related mathematical foundations, including the results of Pythagoras and the algorism describing the methods for performing actual calculations, were "almost a mistake" in comparison.

In the Middle Ages, arithmetic was one of the seven liberal arts taught in universities.

The flourishing of algebra in the medieval Islamic world and in Renaissance Europe was an outgrowth of the enormous simplification of computation through decimal notation.

Various types of tools exist to assist in numeric calculations. Examples include slide rules (for multiplication, division, and trigonometry) and nomographs in addition to the electrical calculator.

Zero as a number comparable to the other basic digits is a concept that is essential to this notation, as is the concept of zero’s use as a placeholder, and as is the definition of multiplication and addition with zero. The use of zero as a placeholder and, therefore, the use of a positional notation is first attested to in the Jain text from India entitled the Lokavibhâga, dated 458 AD and it was only in the early 13th century that these concepts, transmitted via the scholarship of the Arabic world, were introduced into Europe by Fibonacci[3] using the Hindu-Arabic numeral system.

Algorism comprises all of the rules for performing arithmetic computations using this type of written numeral. For example, addition produces the sum of two arbitrary numbers. The result is calculated by the repeated addition of single digits from each number that occupies the same position, proceeding from right to left. An addition table with ten rows and ten columns displays all possible values for each sum. If an individual sum exceeds the value nine, the result is represented with two digits. The rightmost digit is the value for the current position, and the result for the subsequent addition of the digits to the left increases by the value of the second (leftmost) digit, which is always one. This adjustment is termed a carry of the value one.

The process for multiplying two arbitrary numbers is similar to the process for addition. A multiplication table with ten rows and ten columns lists the results for each pair of digits. If an individual product of a pair of digits exceeds nine, the carry adjustment increases the result of any subsequent multiplication from digits to the left by a value equal to the second (leftmost) digit, which is any value from one to eight (9 × 9 = 81). Additional steps define the final result.

The creation of a correct process for multiplication relies on the relationship between values of adjacent digits. The value for any single digit in a numeral depends on its position. Also, each position to the left represents a value ten times larger than the position to the right. In mathematical terms, the exponent for the radix (base) of ten increases by one (to the left) or decreases by one (to the right). Therefore, the value for any arbitrary digit is multiplied by a value of the form 10n with integer n. The list of values corresponding to all possible positions for a single digit is written as {..., 102, 10, 1, 10−1, 10−2, ...}.

The basic arithmetic operations are addition, subtraction, multiplication and division, although this subject also includes more advanced operations, such as manipulations of percentages, square roots, exponentiation, and logarithmic functions. Arithmetic is performed according to an order of operations. Any set of objects upon which all four arithmetic operations (except division by zero) can be performed, and where these four operations obey the usual laws, is called a field.

Addition is the basic operation of arithmetic. In its simplest form, addition combines two numbers, the addends or terms, into a single number, the sum of the numbers.

Adding more than two numbers can be viewed as repeated addition; this procedure is known as summation and includes ways to add infinitely many numbers in an infinite series; repeated addition of the number one is the most basic form of counting.

Addition can be given geometrically as in the following example:

If we have two sticks of lengths 2 and 5, then if we place the sticks one after the other, the length of the stick thus formed is 2 + 5 = 7.

Subtraction is neither commutative nor associative. For that reason, it is often helpful to look at subtraction as addition of the minuend and the opposite of the subtrahend, that is a − b = a + (−b). When written as a sum, all the properties of addition hold.

There are several methods for calculating results, some of which are particularly advantageous to machine calculation. For example, digital computers employ the method of two's complement. Of great importance is the counting up method by which change is made. Suppose an amount P is given to pay the required amount Q, with P greater than Q. Rather than performing the subtraction P − Q and counting out that amount in change, money is counted out starting at Q and continuing until reaching P. Although the amount counted out must equal the result of the subtraction P − Q, the subtraction was never really done and the value of P − Q might still be unknown to the change-maker.

Multiplication is the second basic operation of arithmetic. Multiplication also combines two numbers into a single number, the product. The two original numbers are called the multiplier and the multiplicand, sometimes both simply called factors.

Multiplication is best viewed as a scaling operation. If the numbers are imagined as lying in a line, multiplication by a number, say x, greater than 1 is the same as stretching everything away from zero uniformly, in such a way that the number 1 itself is stretched to where x was. Similarly, multiplying by a number less than 1 can be imagined as squeezing towards zero. (Again, in such a way that 1 goes to the multiplicand.)

The product of a and b is written as a × b or a • b. When a or b are expressions not written simply with digits, it is also written by simple juxtaposition: ab. In computer programming languages and software packages in which one can only use characters normally found on a keyboard, it is often written with an asterisk: a * b.

The term arithmetic also refers to number theory. This includes the properties of integers related to primality, divisibility, and the solution of equations in integers, as well as modern research that is an outgrowth of this study. It is in this context that one runs across the fundamental theorem of arithmetic and arithmetic functions. A Course in Arithmetic by Jean-Pierre Serre reflects this usage, as do such phrases as first order arithmetic or arithmetical algebraic geometry. Number theory is also referred to as the higher arithmetic, as in the title of Harold Davenport's book on the subject.

Primary education in mathematics often places a strong focus on algorithms for the arithmetic of natural numbers, integers, fractions, and decimals (using the decimal place-value system). This study is sometimes known as algorism.

The difficulty and unmotivated appearance of these algorithms has long led educators to question this curriculum, advocating the early teaching of more central and intuitive mathematical ideas. One notable movement in this direction was the New Math of the 1960s and 1970s, which attempted to teach arithmetic in the spirit of axiomatic development from set theory, an echo of the prevailing trend in higher mathematics.[4]