Elementary algebra is a fundamental and relatively basic form of algebra taught to students who are presumed to have little or no formal knowledge of mathematics beyond arithmetic. It is typically taught in secondary school under the term algebra. The major difference between algebra and arithmetic is the inclusion of variables. While in arithmetic only numbers and their arithmetical operations (such as +, −, ×, ÷) occur, in algebra, one also uses variables such as x and y, or a and b to replace numbers.

The purpose of using variables, symbols that denote numbers, is to allow the making of generalizations in mathematics. This is useful because:

In elementary algebra, an expression may contain numbers, variables and arithmetical operations. These are conventionally written with 'higher-power' terms on the left (see polynomial); a few examples are:

In more advanced algebra, an expression may also include elementary functions.

parenthesis and other grouping symbols including brackets, absolute value symbols, and the fraction bar
exponents and roots
multiplication and division
addition and subtraction

A common mnemonic device for remembering this order is PEMDAS. Generally in Elementary Algebra, the use of brackets (often called parentheses) and their simple applications will be taught at most of the schools in the world. 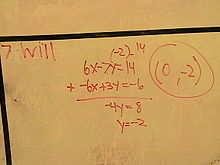 The following sections lay out examples of some of the types of alegbraic equations you might encounter.

Linear equations in one variable

The simplest equations to solve are linear equations that have only one variable. They contain only constant numbers and a single variable without an exponent. For example:

Dividing both sides by 2:

simplifies to the solution:

follows the same procedure to obtain the solution:

where p = b/a and q = −c/a. Solving this, by a process known as completing the square, leads to the quadratic formula.

Quadratic equations can also be solved using factorization (the reverse process of which is expansion, but for two linear terms is sometimes denoted foiling). As an example of factoring:

Which is the same thing as

It follows from the zero-product property that either x = 2 or x = −5 are the solutions, since precisely one of the factors must be equal to zero. All quadratic equations will have two solutions in the complex number system, but need not have any in the real number system. For example,

For this equation, −1 is a root of multiplicity 2. This means -1 appears two times.

An exponential equation is an equation of the form aX = b for a > 0, which has solution

when b > 0. Elementary algebraic techniques are used to rewrite a given equation in the above way before arriving at the solution. For example, if

then, by subtracting 1 from both sides of the equation, and then dividing both sides by 3 we obtain

A logarithmic equation is an equation of the form logaX = b for a > 0, which has solution

then, by adding 2 to both sides of the equation, followed by dividing both sides by 4, we get

from which we obtain

A radical equation is an equation of the form Xm/n = a, for m, n integers, which has solution

if m is odd, and solution, and

In the case of a system of linear equations, like, for instance, two equations in two variables, it is often possible to find the solutions of both variables that satisfy both equations.

An example of solving a system of linear equations is by using the elimination method:

Adding the two equations together to get:

Since the fact that x = 2 is known, it is then possible to deduce that y = 3 by either of the original two equations (by using 2 instead of x) The full solution to this problem is then

Note that this is not the only way to solve this specific system; y could have been solved before x.

Second method of finding a solution

Another way of solving the same system of linear equations is by substitution.

An equivalent for y can be deduced by using one of the two equations. Using the second equation:

Subtracting 2x from each side of the equation:

Using this y value in the first equation in the original system:

Adding 2 on each side of the equation:

Using this value in one of the equations, the same solution as in the previous method is obtained.

Note that this is not the only way to solve this specific system; in this case as well, y could have been solved before x.

Other types of systems of linear equations

In the above example, it is possible to find a solution. However, there are also systems of equations which do not have a solution. An obvious example would be:

The second equation in the system has no possible solution. Therefore, this system can't be solved. However, not all incompatible systems are recognized at first sight. As an example, the following system is studied:

When trying to solve this (for example, by using the method of substitution above), the second equation, after adding 2x on both sides and multiplying by −1, results in:

And using this value for y in the first equation:

No variables are left, and the equality is not true. This means that the first equation can't provide a solution for the value for y obtained in the second equation.

There are also systems which have multiple or infinite solutions, in opposition to a system with a unique solution (meaning, two unique values for x and y) For example:

Isolating y in the second equation:

And using this value in the first equation in the system:

The equality is true, but it does not provide a value for x. Indeed, one can easily verify (by just filling in some values of x) that for any x there is a solution as long as y = −2x + 6. There are infinite solutions for this system.

Over- and underdetermined systems

Systems with more variables than the number of linear equations do not have a unique solution. An example of such a system is

Such a system is called underdetermined; when trying to find a solution, one or more variables can only be expressed in relation to the other variables, but cannot be determined numerically. Incidentally, a system with a greater number of equations than variables, in which necessarily some equations are sums or multiples of others, is called overdetermined.

Relation between solvability and multiplicity

When the multiplicity is only partial (meaning that for example, only the left hand sides of the equations are multiples, while the right hand sides are not or not by the same number) then the system is unsolvable. For example, in

the second equation yields that x + y = 1/4 which is in contradiction with the first equation. Such a system is also called inconsistent in the language of linear algebra. When trying to solve a system of linear equations it is generally a good idea to check if one equation is a multiple of the other. If this is precisely so, the solution cannot be uniquely determined. If this is only partially so, the solution does not exist.
This, however, does not mean that the equations must be multiples of each other to have a solution, as shown in the sections above; in other words: multiplicity in a system of linear equations is not a necessary condition for solvability.