1 (number)
"One" redirects here. For other uses, see 1 (disambiguation).

/ˈwʌn/ or UK /ˈwɒn/) is a number, a numeral, and the name of the glyph representing that number. It represents a single entity, the unit of counting or measurement. For example, a line segment of "unit length" is a line segment of length 1.

The glyph used today in the Western world to represent the number 1, a vertical line, often with a serif at the top and sometimes a short horizontal line at the bottom, traces its roots back to the Indians, who wrote 1 as a horizontal line, much like the Chinese character 一. The Gupta wrote it as a curved line, and the Nagari sometimes added a small circle on the left (rotated a quarter turn to the right, this 9-look-alike became the present day numeral 1 in the Gujarati and Punjabi scripts). The Nepali also rotated it to the right but kept the circle small.[1] This eventually became the top serif in the modern numeral, but the occasional short horizontal line at the bottom probably originates from similarity with the Roman numeral I. In some European countries (e.g., Germany), the little serif at the top is sometimes extended into a long upstroke, sometimes as long as the vertical line, which can lead to confusion with the glyph for seven in other countries. Where the 1 is written with a long upstroke, the number 7 has a horizontal stroke through the vertical line.

While the shape of the 1 character has an ascender in most modern typefaces, in typefaces with text figures, the character usually is of x-height, as, for example, in 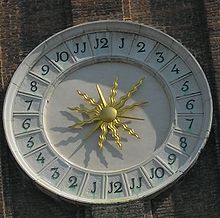 The 24-hour tower clock in Venice, using J as a symbol for 1

Many older typewriters do not have a separate symbol for 1 and use the lowercase l instead. It is possible to find cases when the uppercase J is used, while it may be for decorative purposes.

One cannot be used as the base of a positional numeral system; sometimes tallying is referred to as "base 1", since only one mark (the tally) is needed, but this is not a positional notation.

The logarithms base 1 are undefined, since the function 1x always equals 1 and so has no unique inverse.

Formalizations of the natural numbers have their own representations of 1:

In a multiplicative group or monoid, the identity element is sometimes denoted 1, especially in abelian groups, but e (from the German Einheit, "unity") is more traditional. However, 1 is especially common for the multiplicative identity of a ring, i.e., when an addition and 0 are also present. When such a ring has characteristic n not equal to 0, the element called 1 has the property that n1 = 1n = 0 (where this 0 is the additive identity of the ring). Important examples are general fields.

One is the first figurate number of every kind, such as triangular number, pentagonal number and centered hexagonal number, to name just a few.

In many mathematical and engineering equations, numeric values are typically normalized to fall within the unit interval from 0 to 1, where 1 usually represents the maximum possible value in the range of parameters.

It is also the first and second numbers in the Fibonacci sequence and is the first number in many other mathematical sequences. As a matter of convention, Sloane's early Handbook of Integer Sequences added an initial 1 to any sequence that did not already have it and considered these initial 1's in its lexicographic ordering. Sloane's later Encyclopedia of Integer Sequences and its Web counterpart, the On-Line Encyclopedia of Integer Sequences, ignore initial ones in their lexicographic ordering of sequences, because such initial ones often correspond to trivial cases.

One is neither a prime number nor a composite number, but a unit, like -1 and, in the Gaussian integers, i and -i. The fundamental theorem of arithmetic guarantees unique factorization over the integers only up to units (e.g., 4 = 22 = (-1)6×123×22).

The definition of a field requires that 1 must not be equal to 0. Thus, there are no fields of characteristic 1. Nevertheless, abstract algebra can consider the field with one element, which is not a singleton and is not a set at all.

One is one of three possible values of the Möbius function: it takes the value one for square-free integers with an even number of distinct prime factors.

By definition, 1 is the magnitude or absolute value of a unit vector and a unit matrix (more usually called an identity matrix). Note that the term unit matrix is sometimes used to mean something quite different.

By definition, 1 is the probability of an event that is almost certain to occur.

One is the most common leading digit in many sets of data, a consequence of Benford's law.

The ancient Egyptians represented all fractions (with the exception of 2/3 and 3/4) in terms of sums of fractions with numerator 1 and distinct denominators. For example,

. Such representations are popularly known as Egyptian Fractions or Unit Fractions.

The Generating Function that has all coefficients 1 is given by

This power series converges and has finite value if and only if, | x | < 1.