This article discusses the number five. For the year 5 AD, see 5. For other uses of 5, see 5 (disambiguation).

Five is the third prime number. Because it can be written as 221+1, five is classified as a Fermat prime. 5 is the third Sophie Germain prime, the first safe prime, the third Catalan number, and the third Mersenne prime exponent. Five is the first Wilson prime and the third factorial prime, also an alternating factorial. Five is the first good prime. It is an Eisenstein prime with no imaginary part and real part of the form 3n − 1. It is also the only number that is part of more than one pair of twin primes. Five is a congruent number. Five is conjectured to be the only odd untouchable number and if this is the case then five will be the only odd prime number that is not the base of an aliquot tree.

A030452 lists Markov numbers that appear in solutions where one of the other two terms is 5). Whereas 5 is unique in the Fibonacci sequence, in the Perrin sequence 5 is both the fifth and sixth Perrin numbers.

5 and 6 form a Ruth–Aaron pair under either definition. The classification however may be frowned upon.

There are five solutions to Znám's problem of length 6.

Five is the second Sierpinski number of the first kind, and can be written as S2=(22)+1

While polynomial equations of degree 4 and below can be solved with radicals, equations of degree 5 and higher cannot generally be so solved. This is the Abel–Ruffini theorem. This is related to the fact that the symmetric group Sn is a solvable group for n ≤ 4 and not solvable for n ≥ 5.

Five is also the number of Platonic solids.[1]

A polygon with five sides is a pentagon. Figurate numbers representing pentagons (including five) are called pentagonal numbers. Five is also a square pyramidal number.

Five is the only prime number to end in the digit 5, because all other numbers written with a 5 in the ones-place under the decimal system are multiples of five. As a consequence of this, 5 is in base 10 a 1-automorphic number.

Vulgar fractions with 5 or 2 in the denominator do not yield infinite decimal expansions unlike expansions with most prime denominators, because they are prime factors of ten, the base. When written in the decimal system, all multiples of 5 will end in either 5 or 0.

There are five Exceptional Lie groups.

The evolution of our modern glyph for five cannot be neatly traced back to the Brahmin Indians quite the same way it can for 1 to 4. Later on the Indian Empires of Kushana and Gupta from India had among themselves several different glyphs which bear no resemblance to the modern glyph. The Nagari and Punjabi took these glyphs and all came up with glyphs that are similar to a lowercase "h" rotated 180°. The Ghubar Arabs transformed the glyph in several different ways, producing glyphs that were more similar to the numbers 4 or 3 than to the number 5.[2] It was from those characters that the Europeans finally came up with the modern 5, though from purely graphical evidence, it would be much easier to conclude that our modern 5 came from the Khmer. The Khmer glyph develops from the Kushana/Ândhra/Gupta numeral, its shape looking like a modern day version with an extended swirled 'tail' [G Ifrah, The Universal History of Numbers ISBN 1-86046-324-X]

While the shape of the 5 character has an ascender in most modern typefaces, in typefaces with text figures the character usually has a descender, as, for example, in

Fast Five The fifth installment of the Fast and Furious series.

Five can refer to: 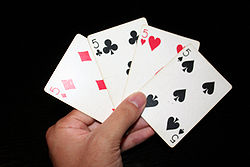 The fives of all four suits in playing cards