Listen (help·info)) is the natural number following 59 and preceding 61. Being three times twenty, 60 is called "three score" in some older literature.

The smallest non-solvable group (A5) has order 60. 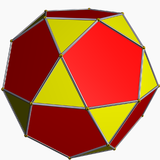 The icosidodecahedron has 60 edges, all equivalent.

There are 60 one-sided hexominoes, the polyominoes made from 6 squares.

In geometry, 60 is the number of seconds in a minute, and the number of minutes in a degree. In normal space, the 3 interior angles of an equilateral triangle each measure 60 degrees, adding up to 180 degrees.

Because 60 is divisible by the sum of its digits in base 10, it is a Harshad number.

A number system with base 60 is called sexagesimal (the original meaning of sexagesimal is sixtieth).

In science and technology 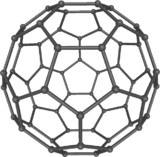 Buckminsterfullerene C60 has 60 carbon atoms in each molecule, arranged in a truncated icosahedron.

The first fullerene to be discovered was buckminsterfullerene C60 - an allotrope of carbon with 60 atoms in each molecule, arranged in a truncated icosahedron. This ball is known as a buckyball, and looks like a soccer ball.

The atomic number of Neodymium is 60, and Cobalt-60 (60Co) is a radioactive isotope of cobalt.

The electrical utility frequency in western Japan, South Korea, Taiwan, the Philippines, Saudi Arabia, the United States, and several other countries in the Americas is 60 Hz.

The Babylonians used base 60.

The Babylonian number system had a base of sixty, inherited from the Sumerian and Akkadian civilizations, and possibly motivated by the large number of divisors which 60 has. The sexagesimal measurement of time and of geometric angles is a legacy of the Babylonian system.

The number system in the Mali Empire was also based on sixty (this is reflected in the counting system of the Maasina Fulfulde, a variant of the Fula language spoken in contemporary Mali).[2] The Ekagi of Western New Guinea have also used base 60,[3] and the sexagenary cycle also plays a role in Chinese calendar and numerology.

In German: Schock and in Latin: sexagena refer to 60 = 5 dozen = 1/2 small gross. This quantity was used in international medieval treaties e.g. for ransom of captured Teutonic Knights.

In the Bible, the number 60 occurs several times, for example as the age of Isaac when Jacob and Esau were born,[4] and the number of warriors escorting King Solomon.[5]

In the laws of kashrut of Judaism, 60 is also the proportion (60:1) of kosher to non-kosher ingredients which can render an admixture kosher post-facto.[6]

In Islam, 60 was mentioned only once in the holy Koran: "..he should feed sixty indigent ones.."[7] 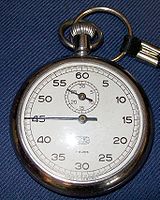 There are 60 seconds in a minute, and 60 minutes in an hour