15 (fifteen) is the natural number following 14 and preceding 16. In English, it is the smallest natural number with seven letters in its spelled name.

In speech, the numbers 15 and 50 are often confused. When carefully enunciated, they differ in which syllable is stressed: 15 /fɪfˈtiːn/ vs 50 /ˈfɪfti/. However, in dates such as 1500 ("fifteen hundred") or when contrasting numbers in the teens, the stress generally shifts to the first syllable: 15 /ˈfɪftiːn/.

Fifteen is a triangular number, a hexagonal number, a pentatope number and the 4th Bell number. Fifteen is the double factorial of 5. It is a composite number; its proper divisors being 1, 3 and 5. With only two exceptions, all prime quadruplets enclose a multiple of 15, with 15 itself being enclosed by the quadruplet (11, 13, 17, 19). 15 is also the number of supersingular primes.

15 and 16 form a Ruth-Aaron pair under the second definition in which repeated prime factors are counted as often as they occur.

Fifteen is the magic constant of the unique order-3 normal magic square:

15 is the smallest number that can be factorized using Shor's quantum algorithm.

There are 15 solutions to Znám's problem of length 7.

15 is a repdigit in binary (1111). In hexadecimal, as well as all higher bases, fifteen is represented as F. 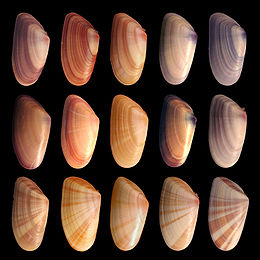 Fifteen total individuals in the mollusk species Donax variabilis comprise the entire coloration and patterning in their phenotypes.