Monkwearmouth Station Museum served Monkwearmouth, Sunderland, England. The railway station was closed in March 1967 as a result of the Beeching Axe and featured a restored booking office dating from the Edwardian period.

The Tyne and Wear Metro and mainline trains still pass through the station without stopping, but the Metro calls at St. Peter's station a few hundred yards south of the old station.

It is part of the Tyne and Wear Museums group and is a Grade II* listed building[1]. 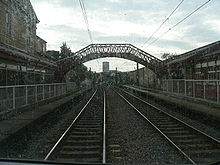