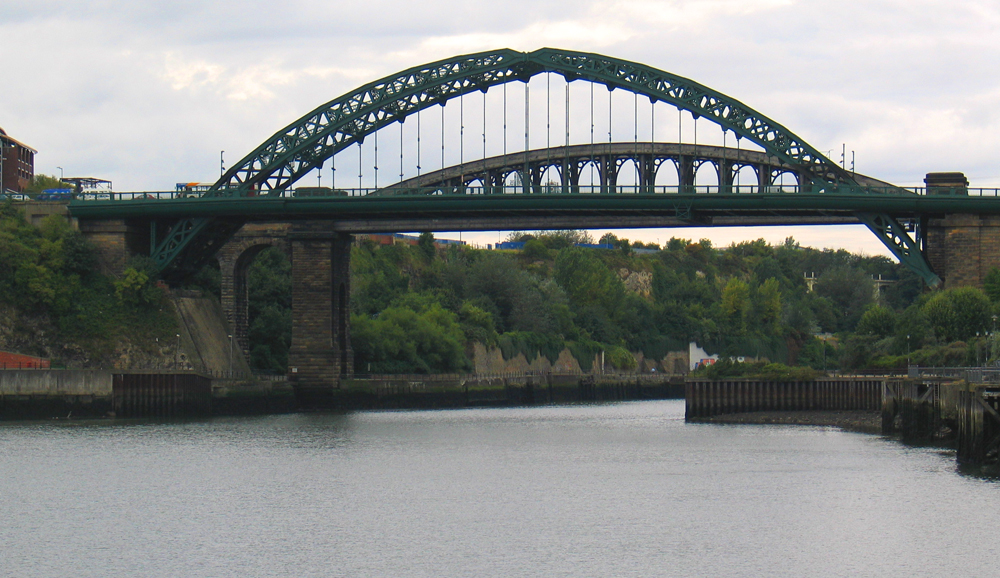 bridge_name = Wearmouth Bridge
caption = The current Wearmouth Bridge - constructed in 1929. The bridge in the background is a railway bridge and is still in use.
official_name =
locale = ,
carries = Motor vehicles
", "
Pedestrians
crosses =
maint =
open =
below = 105 ft
traffic =
design =
toll =
mainspan = 375ft
length =
width = One two-lane carriageway) (southbound), Three carriageway (northbound), two cycle/footpaths (total 48 ft)The Wearmouth Bridge is a across the in . It is the final bridge over the river before its mouth with the .

The current bridge is the third Wearmouth Bridge in its position. The first opened in 1796, and then was reconstructed in the 19th century.

The first Wearmouth Bridge opened in 1796, with the foundation stone having been laid in September 1793. It was sponsored by Rowland Burdon, the MP. According to the plaque on the current bridge, its construction "proved to be a catalyst for the growth of Sunderland," since access between and had previously only been by ferry, with the nearest bridge at . There was originally a toll for traffic and pedestrians, although tolls for pedestrians were abolished in 1846.

It was the second iron bridge built after the famous span at , but was over twice as long with a nominal span of 240 feet, and only three-quarters the weight. Indeed, at the time of building, it was the biggest single span bridge in the world. It opened to traffic on , having cost a total of about £28,000.

In 1805 the bridge had to be repaired after heat from the sun caused some of the cross tubes to fall out.

From 1857 to 1859 it was reconstructed by , who stripped the bridge back to its six iron ribs and levelled the hump in its middle by raising the abutments. The bridge was reopened in March 1859, with the toll completely abolished in 1885.

To accommodate the growing volume of traffic, construction began on the current bridge in 1927. It was designed by Mott, Hay and Anderson and fabricated by the famous bridge building firm of at their Dalmarnock Ironworks in Glasgow (they also built the famous and the steel structure of in London) ['The Sir William Arrol Collection', Royal Commission on the Ancient and Historical Monuments of Scotland contains many pictures of Wearside Bridge under Construction] . The new bridge was built around the old one to allow the road to remain open. It was opened on by the Duke of York (who would later become King George VI).

It is described by , the recognised authority, as being of superb elegance.Fact|date=February 2007

The adjoining railway bridge was built in 1879, and extended the railway south from Monkwearmouth to the centre of Sunderland. [cite web |work=Sunderland City Council |title=Historic Structures: Wearmouth Bridge |url=http://www.sunderland.gov.uk/Public/Editable/Themes/Visitors-Guide/Heritage/wearmouth-bridge.asp |accessdate=2006-09-24]

Further up the river, another bridge, the , was completed in 1909, linking the areas of and Southwick. [cite web |title=SINE Project: Structure details for Queen Alexandra Bridge |work=University of Newcastle upon Tyne |url=http://sine.ncl.ac.uk/view_structure_information.asp?struct_id=1242 |accessdate=2006-10-12]

The bridge carries the between and and the which was the old route of the A19 until the bypass was built leading to the .