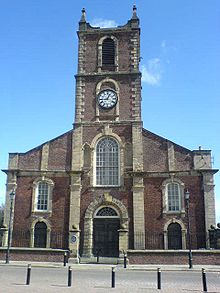 Holy Trinity is a former church in Sunderland. It was opened in 1719 as the church for the newly created Parish of Sunderland.[1]

It is a listed building and is one of the oldest buildings in the East End of Sunderland.[1][2]

It is unknown who built the church, but what is known for sure is that Daniel Newcombe — who was appointed rector — and William Etty were involved in some of its design.[3][4] A plaque marking its Grade I listed building status credits Etty as the designer.[5] In its early years, the building was also home to the Select Vestrymen — in effect the town council[citation needed] — and the library[5] and the mechanical fire pump.[citation needed]

The church is no longer in use for worship, having closed in 1988, and is now owned by the Churches Conservation Trust.[4] It is also used by Sunderland Old Township Heritage Society, the Donnison School, the Rector Gray Society and the communities of Hendon and Old Sunderland during "Heritage Days".