/ˈhoʊtən liː spriŋ/) is part of the City of Sunderland in the county of Tyne and Wear, North East England that has its recorded origins in Norman times. It is situated almost equidistant between the cathedral city of Durham 7 miles (11.3 km) to the south-west and the centre of the City of Sunderland about 6 miles (9.7 km) to the north-east. The town of Seaham and the North Sea lie about 5 miles (8 km) directly to the east. The towns of Newbottle, Fencehouses and Hetton-le-Hole lie nearby. It has a population of 36,746.[1]

Other towns within the Houghton-le-Spring postal district include: Philadelphia, Shiney Row, Chilton Moor and Woodstone Village.

The A690 road from Durham to Sunderland meets the A182 in Houghton at an unusual interchange. Heading northeast, slip roads leave the A690, heading up to a roundabout, while the A690 climbs and travels above a second roundabout, before the entry slip joins the A690 itself.[2]

The earliest mention of the town's name is in the Boldon Book in 1183 as 'Hoctona'.[3] An English transcription states:

During excavations under the church of St Michael and All Angels in 2008-9 as part of the church’s refurbishment, not only were Roman remains discovered but some very ancient stones which suggest that the area has been settled since prehistoric times and that the site of the church has had some religious significance for thousands rather than hundreds of years. Glass inserts in the new floor of the church enable some of these to be seen.

In 1311, the village was owned by Albreda, widow of Lord Henry Spring, hence the addition of 'le spring'. That explanation of the addition of ‘le Spring’ is debatable and there are alternatives. One opinion is that it is derived from the Le Spring family, Lords of Houghton in ancient times. Another explanation, which is backed up by a "Regester Booke belonginge to the Paryshe of Houghton in the Springe" from 1598,[4] is based around the medicinal springs which flow from the surrounding limestone rocks. This latter explanation ties in with the Roman names in the area in which "le" is taken to be "in the" as in Chester-le-Street, Witton-le-Wear, Dalton-le-Dale, Hetton-le-Hole.[5] Credence is added to this consideration by the area of the town formerly known as the Lake and the stream/spring that nowadays still runs through the centre of the town, although this has long since been directed to run through a culvert. 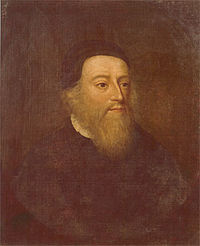 Bernard Gilpin, Apostle of the North was associated with the town

The parish church of St Michael and All Angels dates back to Norman times and contains the tomb of Bernard Gilpin, known as 'the Apostle of the North'. Gilpin was Archdeacon of Durham and in 1557 became the rector at Houghton-le-Spring, which at that time was one of the largest parishes in England.

During World War II, Houghton was relatively unscathed from the bombing raids on nearby Sunderland.[6]

Houghton Feast is an ancient festival held every October in the town. It has its origins in the 12th century as the dedication festival to the Parish Church of St Michael & All Angels.[7] Nowadays the festival lasts ten days and typically features a fairground, carnival, fireworks and ox roasting event, in commemoration of Rector Bernard Gilpin's feeding of the poor. It was expanded in the 16th century by Gilpin and furthermore in the late 18th century when it became connected with horse racing. The 19th century saw the introduction of steam-powered rides and all the fun of the fair, however events were downscaled as a result of World War II. Rector Noel Gwilliam was responsible for initiating the Feast format as we know it today and encouraging an emphasis on the religious aspects. 2005 marked the 50th anniversary since former ward councillor John Mawston became involved with Houghton Feast.

In more recent times, Houghton was an active coal-mining town. The local mine began to sink its first shaft in 1823 and was active until its closure in 1981. At its peak in the early 20th century, the mine employed over 2,000 workers.[8]

Houghton-Le-Spring's main shopping area is located in Newbottle Street which includes a supermarket, a library, the Post Office, and various other outlets including a Computer Repair shop. Pubs in Houghton-Le-Spring include The White Lion, The Copt Hill, The Mill, The Burn, The Britannia, The Golden Lion which reportedly has stood for almost 300 years The earliest records for the public house date from 1827 and show that it was owned by the Rector, and The Wild Boar which is part of the Wetherspoons chain.

Houghton's Newbottle Street now includes a B&M Bargins superstore, and two fashion stores in Store 21 and JD Fashions. Both stores are looking to open nationwide as their new fashion ideas have made a good impression on the locals. Unfortunatley, two shops closed down in Newbottle Street, they were Best Wishes (a card and sweet shop) and The Games Emporium (a games, sweet and DIY shop).

Speedway racing was staged at the racecourse. Contemporary newspaper reports indicate the sport was staged in 1930 but it may have operated at other times. Horse racing last featured at the site in 1938 owing to the outbreak of World War II the following year, and was replaced with Greyhound racing.

Nowadays locals often travel the few miles to Joe's Pond between Chilton Moor and East Rainton for walks and relaxation.

The local branch of Woolworths shut down when the company went into administration and there were rumours of a Wetherspoons pub moving in or a Tesco Metro. However, in March 2010 the store was refurbished and is now a Store Twenty One.

Houghton Dance & Performing Arts Academy (originally Anne Thompson School of Dancing) announced a new name "ZAZZ" in January 2010. The Academy is housed in Empire House which was the original Empire Cinema in Houghton le Spring. Nowadays Zazz hosts many theatre productions throughout the year (including Annie in 2009 and Little Shop of Horrors in 2008). Fame the Musical will be staged in August 2010 and for the annual Houghton Feast celebrations in October 2010.

Bernard Gilpin (1517–1583), Apostle of the North, was associated with the town. William Sancroft, later Archbishop of Canterbury, was briefly Rector of Houghton-le-Spring in 1661-1662.[9] Famous amateur mathematician, William Shanks, worked out the value of Pi to 707 decimals (of which the first 527 were correct) while living in Houghton. He died in 1882 and was buried in the town. Other noteworthy people associated with Houghton include: the actress Florence Linden Travers (1913–2001); music producer Trevor Horn; musician Paul Mullen; Jaff from rock band the Futureheads; biologist Gordon Scurfield; novelist Sheila Quigley; and footballer David Knight.