The 183 members of the National Council are elected by nation-wide popular vote for a term of four years; each Austrian sixteen years or older on the day the election takes place is entitled to one vote. National Council elections are general elections. The voting system aims at party-list proportional representation, uses partially open lists, and is relatively straightforward:

In addition to voting for a party list, voters may express preference for one individual candidate. A candidate receiving sufficiently many personal votes can rise in rank on his or her district party list; voters thus have a certain degree of influence as to which particular individual wins which particular seat. It is not possible, however, to simultaneously vote for party X but exert influence on the candidate rankings on the party list of party Y.

Austria's federal constitution defines Austria to be a presidential democracy: the executive branch of government is supposed to be headed by the president and not to be answerable to the legislative branch. In practice, however, Austria's federal administration as such has comparatively little scope and would be almost totally paralyzed should the National Council fail to support it. While the executive branch has the theoretical authority to dissolve a hostile National Council, constitutional convention prevents this power from being exercised. Austria accordingly functions as a parliamentary democracy: for all intents and purposes, the cabinet is subject to approval by the National Council, the president being little more than a figurehead.

Make-up of the National Council 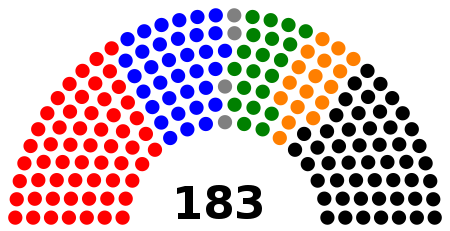