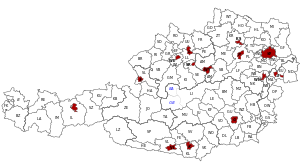 Map of Austria subdivided in the 84 districts. In red the 15 Statutarstädte

Austria is divided into 84 political districts (Politische Bezirke), and 15 Statutarstädte which form their own districts.

The Austrian Bezirk is roughly equivalent to the Landkreis in Germany and County in the United States. The administrative office of a district, the Bezirkshauptmannschaft is headed by the Bezirkshauptmann. The districts are in charge of the administration of all matters of federal and state administrative law and subject to orders from the higher instances, usually the Landeshauptmann (governor) in matters of federal law and the Landesregierung (state government) in state law. Thus, the district is the basic unit of general administration in Austria.

Officials on the district level are not elected but appointed by the state government.

Vienna, which is both a state and a Statutarstadt, is further subdivided into districts, which are divisions used for local administration by the city government.

For more information on Austrian administration, see States of Austria.