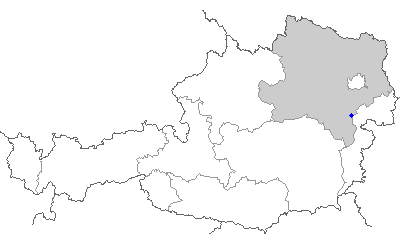 Wiener Neustadt ( _hu. Bécsújhely) is a town located south of , in the state of , . It is a self-governed city and the seat of the district administration of .

The city was founded by the Duke Leopold V in 1194, who financed the construction of the city with the ransom paid for the English king Richard the Lionheart, who had previously been held as a hostage in Austria at . Wiener Neustadt, meaning more or less "New Vienna" ("Viennese Newtown"), first served as a fortress to defend against nearby . Important privileges were given to the city in order to enable it to prosper. In the 15th century, Wiener Neustadt experienced a population boom, when Emperor Friedrick III took up his residence here and in . The "Wappenwand" (coat of arms wall) at the local castle displays the coats of arms of his possessions in the middle. His son Maximilian I maintained his court in Wiener Neustadt and is buried there in the St. George's Cathedral.

King conquered the city in August of 1487 after having laid siege to it for two years. He dedicated the to the inhabitants. Maximilian I managed to reconquer his native city in 1490. During the 16th century, Wiener Neustadt lost its status as imperial residence and much of its importance. However, it still fulfilled its function as bulwark against the Turks and the . In 1751 it received greater attention when Empress decided to dedicate the First Military Academy worldwide inside the imperial castle. In 1752, the took up its operations, which have continued to this day with only a few interruptions. (Erwin Rommel became the commandant in 1938.) In 1768, Wiener Neustadt was destroyed by an earthquake. The castle, which had suffered strongly, was rebuilt using plans made by the architect . In 1785, Emperor Joseph II transferred the see of the to .

In 1909, the "first official Austrian airfield" was inaugurated north of the city.

WNF had absorbed Hirtenburg, which itself had taken over Hopfner. WNF aircraft included the Wn11, 15, & 16 and the Wiener Neustadter (Doblohff) WNF 342 Tip-Jet Helicopter. In 1944, the Doblhof WNF-4 was the first ramjet powered helicopter.Hopfner aircraft

] and two plants which used labor. Bombing operations such as left [http://www.geheimprojekte.at/t_wnfwerk1.html only 18 of 4,000 buildings undamaged:]

*The Late-Romanesque "Dom", consecrated in 1279 and cathedral from 1469 to 1785. The choir and transept, in Gothic style, are from the 14th century. In the late 15th century 12 statues of the Apostles were added in the apse, while the bust of Cardinal is attributed to .
*Former church of "St. Peter an der Sperr", erected in the 13th century and modified in the mid-15th century by the imperial architect Peter von pusica. Secularized in the 19th century, it is now used for exhibitions.
*The Military Academy, a 13th century formerly four-towered castle which was later used as residence by . The latter had it enlarged and the St. George Chapel built in the mid-15th century: it has notable glassworks and houses the tomb of Emperor Maximilian I. It became seat of the Academy in 1752. Destroyed during World War II, it has been rebuilt to the original appearance.
*Water tower
*Tower of Tortures (early 13th century), now housing a private weapons collection.
* (a at Hauptplatz)
*Church of the Capuchins, documented from the 13th century. Of the original construction today the Gothic choir (late 14th century) and the statues of St. Mary and St. James can be seen.
*The medieval walls, built using part of the ransom of .
* [http://www.stadtmuseum.wrn.at/service/service_e.asp?cont=oeffnung Communal Museum of Wiener Neustadt]
*City archives
* [http://www.aviaticum.at/indexa_e.htm Flugmuseum Aviaticum]
* [http://www.industrieviertelmuseum.at/ Industrial museum]
*Hospital museum
*Kurt Ingerl-Gedenkraum
*Mineralogical museum
*Tower museum in the cathedral

Wiener Neustadt connects to other major centers of population by the and the . The city has two airfields (a military one which was the first airfield in Austria and a civil one owned by Diamond Aircraft) and is the starting point of Austria's only shipping canal, the , which was meant to reach out to but was never finished.

Austria's first and largest for business and engineering, the , is located here.

Development of the city

The most recent extension of the city is the " [http://www.civitasnova.at/ CIVITAS NOVA] ", Latin for "new city", an ambitious project for an industrial, research and commercial center. In 2008, on the area of the Civitas Nova, a cancer research center for will be opened under the name of [http://www.medaustron.at/ Med Austron] (link in German).

In 1996 Wiener Neustadt became internationally famous as a [http://www.dade.at/sidewalk/sidew.htm so-called "sidewalk"] designed by a Japanese artist was built around the main square. The [http://www.aerodrome.at/ aerodrome] is a big music venue (link in German).