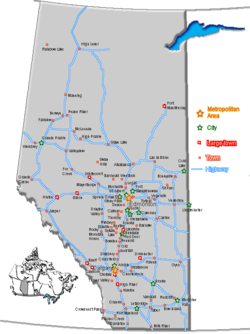 Distribution of town and cities in Alberta. 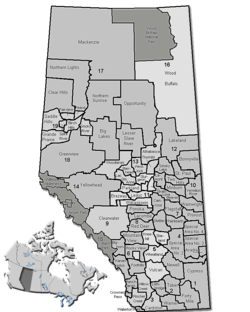 Rural and specialized municipalities of Alberta

Alberta also has numerous unincorporated communities (including urban services areas, hamlets and a townsite) that are not independent municipalities in their own right. However, they are all recognized as sub-municipal entities by Alberta Municipal Affairs under the jurisdiction of specialized municipalities or rural municipalities, with the exception of the lone townsite (its jurisdiction is shared with an Indian reserve that surrounds it).

With the exception of Indian reserves, the administration of municipalities in Alberta is regulated by the Municipal Government Act,[1] the Special Areas Act[2] and the Metis Settlements Act.[3]

According to Section 82 of the Municipal Government Act (MGA), an area may incorporate as a city if:

Essentially, cities are formed from urban communities with populations of at least 10,000 people.[5]

According to Section 81 of the Municipal Government Act (MGA), an area may incorporate as a town if:

Essentially, towns are formed from urban communities with populations of at least 1,000 people. When a town's population exceeds 10,000 people, its council may apply to change its status to that of a city, but the change in incorporated status is not mandatory.[5]

According to Section 80 of the Municipal Government Act (MGA), an area may incorporate as a village if:

Essentially, villages are formed from urban communities with populations of at least 300 people. When a village's population exceeds 1,000 people, its council may apply to change its status to that of a town, but the change in incorporated status is not mandatory.

Communities with shrinking populations are allowed to retain village status even if the number of residents falls below the 300 limit. Some of Alberta's villages have never reached a population of 300 people, but were incorporated as villages before there was a requirement to have a population of 300 or more.

Alberta currently has a total of 95 villages, with a combined population totalling 39,347 as of 2009.[4] These numbers reflect the recent dissolution of the villages of Derwent and New Sarepta to hamlet status on September 1, 2010.[27][28]

According to former Section 79 of the Municipal Government Act (MGA), a summer village is an area that:

As a result of Section 79 being repealed,[1] summer villages can no longer be formed in Alberta.[5]

Essentially, summer villages were once formed from urban communities with populations of less than 300 people and significant non-permanent populations. When a summer village's population exceeds 300 people, its council may apply to change its status to that of a village, but the change in incorporated status is not mandatory.

Alberta currently has a total of 51 summer villages, with a combined population totalling 6,152 as of 2009.[4]

According to Section 83 of the Municipal Government Act (MGA), a municipality may incorporate as a specialized municipality under one of the following three scenarios:

Alberta's five specialized municipalities have a combined population totalling 198,444 as of 2009.[4]

According to Section 78 of the Municipal Government Act (MGA), a municipal district is an area in which:

Essentially, municipal districts are large rural areas in which their citizens reside on farms, country residential subdivisions or unincorporated communities (i.e., hamlet, localities and other settlements).[5]

Alberta's seven improvement districts have a combined population totalling 1,994 as of 2009.[4]

In September 2011, the Province of Alberta approved the future formation of a new improvement district named Improvement District No. 349.[50] It will be located north of the City of Cold Lake and will include the Cold Lake Air Weapons Range from Lac La Biche County and some adjacent lands further to the north from the Regional Municipality of Wood Buffalo.[51][52][50] The effective incorporation date of Improvement District No. 349 will be January 1, 2012.[50]

Special areas are rural municipalities created in 1938 under the authority of the Special Areas Act.[2][5] A special area is not to be confused with a specialized municipality, which is a completely different municipal status.

An urban service area is a type of hamlet that is not officially defined under the Municipal Government Act (MGA). However, the Province of Alberta recognizes it as equivalent to a city for the purposes of program delivery and grant eligibility according to the Orders in Council that established the Regional Municipality (R.M.) of Wood Buffalo and Strathcona County as specialized municipalities.[59][60]

Essentially, urban services areas meet the eligibility requirements of the MGA to incorporate as a city. As such, they are Alberta's largest hamlets.

There are currently two urban services areas in Alberta:

Fort McMurray, within the jurisdiction of the R.M. of Wood Buffalo, was formerly a city prior its amalgamation with Improvement District No. 143 on April 1, 1995. It was designated an urban service area at the time of the amalgamation.[59]

Sherwood Park has always been an unincorporated community under the jurisdiction of Strathcona County. It became an urban service area when Strathcona County changed its status from a municipal district to a specialized municipality on January 1, 1996.[60]

According to Section 59 of the Municipal Government Act (MGA), hamlets are unincorporated communities that:

Further, Section 59 of the MGA provides the councils of municipal districts (or counties) and specialized municipalities the authority to designate unincorporated communities within its boundaries as hamlets.[1][5] Hamlets may also be designated within improvement districts and special areas by the Minister of Municipal Affairs pursuant to Section 590 of the MGA and Section 10 of the Special Areas Act respectively.[1][2]

When a hamlet's population reaches 300, it becomes eligible to incorporate as a village under Section 80 of the MGA, so long as the majority of the buildings are still on parcels of land smaller than 1,850 m².[1] However, it is a modern-day rarity for a hamlet to incorporate as a village – Barnwell and Wabamun were the last two to do so both on January 1, 1980. It is much more common these days for villages to revert to hamlet status through the dissolution process instead.

There are currently 386 hamlets in Alberta, two of which are the urban services areas presented above.

A townsite is a type of unincorporated community that is not officially defined under the Municipal Government Act (MGA), but it is generally regarded as an independent urban area within an Indian reserve that is comparable in population, land area, services, and built form, to that of Alberta's incorporated towns. Essentially, townsites would meet the eligibility requirements of the MGA to incorporate as a town if they were not located on Indian reserve lands under federal jurisdiction.

Redwood Meadows is Alberta's only townsite at this time and is located within the Tsuu T'ina Nation.

Alberta currently has eight Métis settlements, all of which are located in the northern half of the province. The official names of the eight settlements, and the municipal districts they are within, are as follows:

Alberta's eight Métis settlements have a combined population totalling 7,990 as of 2009.[4]

Reserves in Alberta cover a total area of 1,622,630 acres (6,566.6 km2) and range from 1,089 acres (4.41 km2) to 354,667 acres (1,435.29 km2) in size.[5] Under the British North America Act, legislative authority over Indian reserves is placed exclusively with the national parliament, specifically Department of Indian and Northern Affairs Canada (INAC). Local administration is placed with local native governments. 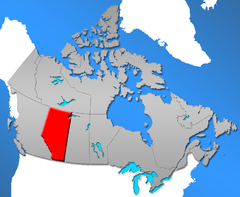 Communities in Canada's provinces and territories