Medieval fortification is military methods of Medieval technology that covers the development of fortification construction and use in Europe roughly from the fall of the Western Roman Empire to the Renaissance. During this millennium, fortifications changed warfare, and in turn were modified to suit new tactics, weapons and siege techniques. 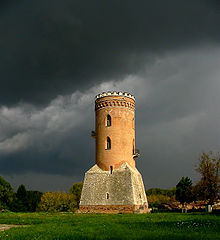 Towers of medieval castles were usually made of stone or sometimes (but rarely) wood. Often toward the later part of the era they included battlements and arrow loops. Arrow loops were vertical slits in the wall where archers from the inside shot arrows through at the attackers, but they made it extremely difficult for attackers to get many arrows through back at the defenders.

The exact nature of the walls of a medieval town or city would depend on the resources available for building them, the nature of the terrain and the perceived threat. In northern Europe, early in the period they are likely to have been constructed of wood and proofed against small forces. Especially where stone was readily available for building, the wood will have been replaced by stone to a higher or lower standard of security. This would have been the pattern of events in the Five Boroughs of the Danelaw in England.

In any case, the wall will have had an internal and an external pomoerium. This was a strip of clear ground immediately inside or outside the wall. The word is a medieval and later one, derived from the classical Latin post murum, behind the wall.

An external pomoerium, stripped of bushes and building, gave defenders a clear view of what was happening outside and an unobstructed field of shot. An internal pomoeriun gave ready access to the rear of the curtain wall to facilitate movement of the garrison to a point of need. By the end of the sixteenth century, the word had developed further in common use, into pomery.

By that time too, the medieval walls were no longer secure against a serious threat from an army as they were not designed for resisting cannon shot. They might have been rebuilt as at Berwick on Tweed or retained for use against thieves and other threats of a lower order. Very elaborate and complex schemes for town defences were developed in the Netherlands and France but these belong mainly to the post-medieval periods. By 1600, the medieval wall is likely to have been seen more as a platform for displaying hangings and the pomery as a gathering ground for the spectators or as a source of building stone and a site for its use. However, a few such as those of Carcassonne and Dubrovnik, survived fairly well and have been restored to an impressively complete state.

Medieval walls that were no longer adequate for defending were succeeded by the strategy of Star fort. After the invention of the explosive shell, star forts became obsolete as well. 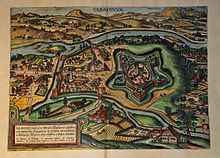 Fortifications of Oradea, Romania in a 1617 print

Harbours or some sort of water access was often essential to the construction of medieval fortification. It was a direct route for trading and fortification. Having direct access to a body of water provided a route for resupply in times of war, an additional method of transportation in times of peace, and potential drinking water for a besieged castle or fortification. The concept of rivers or harbours coming directly up to the walls of fortifications was especially used by the English as they constructed castles throughout Wales.

Religion was a central part of the lives of medieval soldiers, and churches, chapels, monasteries, and other buildings of religious function were often included within the walls of any fortification, be it temporary or permanent. A place to conduct religious services was usually essential to the morale of the soldiers.

Motte-and-bailey was the prevalent form of castle during 11th and 12th centuries. A courtyard (called bailey) was protected by a ditch and a palisade (strong timber fence). Often the entrance was protected by a lifting bridge, a drawbridge or a timber gate tower. Inside the bailey were stables, workshops,and a chapel.

Motte was the final refuge in this type of castle. It was a raised earth mound. Its height varied between 5 m (15 ft) to 10 m (30 ft). There was a tower on top of the motte. In most cases, the tower was made of timber, though some were also made of stones. Stone towers were found in natural mounds, as artificial ones were not strong enough to support stone towers. Larger mottes had towers with many rooms, including the great hall. Smaller ones had only a watch tower.

Construction could sometimes take decades. The string of Welsh castles Edward I of England had built were an exception in that he focused much of the resources of his kingdom on their speedy construction. In addition to paid workers, forced levies of labourers put thousands of men on each site and shortened construction to a few years.

Materials that were used in the building of castles varied through history. Wood was used for most castles until 1066. They were cheap and were quick to construct. The reason wood fell into disuse as a material is that it is quite flammable. Soon stone became more popular.

Stone castles took years to construct depending on the overall size of the castle. Stone was stronger and of course much more expensive than wood. Most stone had to be quarried miles away, and then brought to the building site. But with the invention of the cannon and gunpowder, castles soon lost their power.

Costs for the walls depended on the material used. Wood would cost very little and was quick but was weak. Stone was strong but very expensive and time consuming.

Manpower in the Medieval era in traditional governments in Europe consisted mainly of slave labor and low-class laborers. Slaves came from conquered nations or were traded from other nations. They worked eight to twelve hours everyday, except (if they were forced to convert) on religious holidays. Slaves were paid only in old or soiled food and bad shelter. Laborers were only a step above slaves, paid with at least some currency and generally decent food and shelter (though they are considered in debt to the employer for such materials and not be paid because of this).[citation needed]

Defensive walls were usually topped with crenellation or parapets that offered protection to those defending from the top of the wall. 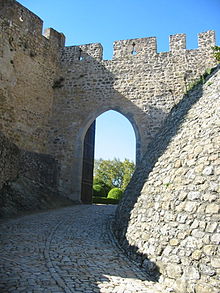 An entranceway creates problems in warfare, as it is the weakest point on any wall. Entranceways must be able to be open enough to allow supplies to be brought in, yet be able to provide a solid wall to an enemy. Ditches and moats must be passable in peace, yet able to be uncovered during a siege, and walls must be broken enough to allow easy passage, yet not compromise the security of the compound. Multiple wall and ditch systems compounds the problem, leading to the necessity of a controlled entranceway. Gates came in many forms, from the simple stone buttress and timber blocks described by Avery in his work "'Stoning and Fire' at hill fort entrances of southern Britain” (Avery, Michael, World Archeology, Vol. 18, No. 2, Oct., 1986, pp. 216–230.) , to the massive and imposing stone archways and thick wooden doors most associated with medieval citadels. Another type of gateway fortification was a barbican, a heavily fortified entranceway.

A Killing field was an area between the main wall and a secondary wall, so when the first wall was breached the attackers would run into the killing field to be confronted by another wall from which soldiers bombarded them. Soldiers would be positioned atop the second wall and armed with any variety of weapons, ranging from bows to crossbows to simple rocks.

A moat was a common addition to medieval fortifications, and the principal purpose (just as in antiquity) to make the walls harder to assail and increasing their effective height. In many instances, natural water paths were used as moats, and often extended through ditches to surround as much of the fortification as possible. Provided this was not so unnaturally contrived as to allow an attacker to drain the system, it served two defensive purposes. It made approaching the curtain wall of the castle more difficult and the undermining of the wall virtually impossible. To position a castle on a small island was very favourable from a defensive point of view, although it made deliveries of supplies and building materials more cumbersome and expensive.

A keep is a strong central tower which normally forms the heart of a castle. Often the keep is the most defended area of a castle, and as such may form the main habitation area for a noble or lord, or contain important stores such as the armoury or the main well.

At this time, internal stairways in fortified buildings were generally constructed so as to wind up a cylindrical well, and designed to give an advantage to a defender. The principle usually adopted was that the defender was likely to be positioned higher than an assailant who was presumed to have entered on the ground floor. As most people are right-handed, and the defender higher up, the stair was constructed as a left-handed helix,[citation needed] forcing the assailant to fight with his sword hand close to the central pillar, the newel of the stair, thereby limiting his capacity for sword play, while the defender could more comfortably reach around with his sword arm nearer the outer wall of the well.[citation needed]

Conversely, spiral stairs in churches are usually, but not invariably, in the form of a right-hand helix.[citation needed]

Stairs were also constructed to contain trick or stumble steps. These were steps that had different rise height or thread depth from the rest and would cause anyone running up the stairs to stumble or fall, so slowing down the attackers' progress. 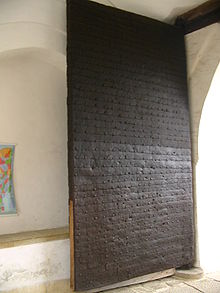 Doors were made out of two layers of oak planks. The grain of the wood would run vertically on the front layer and horizontally on the back, like a simplistic form of plywood. The two layers would be held together by iron studs.

The studs themselves were pointed on the front so that attackers would damage their weapons (swords, axes, etc.) while trying to break through.

As the power of cannons grew during the 16th and 17th century, medieval walls became obsolete as they were too thin to offer any realistic protection against prolonged bombardment. As a consequence of this, many walls from medieval times were torn down and the stone (still valuable as construction material) reused in more modern bulwarks and bastions. The resulting space is often seen in old city centers of Europe even to this day, as broader streets often outline where the old wall once stood (evident for example in Prague and Florence, Italy). 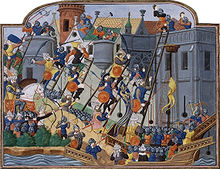 The siege of Constantinople.