Marawi
For other uses, see Merowe.

Marawi City is a Muslim city and capital of the province of Lanao del Sur on the island of Mindanao in the Philippines. The people of Marawi speak Maranao, named after Lake Lanao, the lake on which shores Marawi City sits.

Marawi City is located on the shores of Lake Lanao and straddles the area where the Agus river starts. It has a total land area of 87.55 km².

Marawi was known as Dansalan when it served as the capital of the undivided Lanao province from 1907 to 1940. Dansalan in Maranao is a place where ships berth -- a port of entry.

According to the late well-known Maranao scholar Dr. Mamitua Saber, Marawi City got its charter in 1940. The granting of a charter to the old Dansalan Municipality was jointly conceived by the Philippine Commonwealth President, Manuel L. Quezon and Assemblyman, later Senator, Tomas L. Cabili. The changing of the official name from Dansalan to Marawi was through Congressional amendment of the Charter in 1956 sponsored by Sen. Domocao Alonto. This is embodied in Republic Act No. 1552 dated June 16, 1956.

The renaming of the city as "Islamic City of Marawi" was proposed in the Parliamentary Bill No. 261 in the defunct Batasan Pambansa reportedly to attract funds from the Middle East. 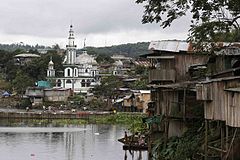 Maranao is widely spoken in Marawi City, which has a predominantly Muslim population which accounts for 99% of the population. However, the inhabitants can speak Tagalog, Cebuano and to some extent, English.

A view of Marawi City.

The economy of Marawi City is largely based on agriculture, trading and exporting. Most industries in the city are agriculture-oriented. They include rice and corn, hollow block manufacturing, goldsmithing, and saw milling. Small and cottage-size enterprises are engaged in garment-making, mat and malong weaving, woodcraft, brassware making, web development, and blacksmithing.

Marawi City is predominantly Muslim and the distribution of alcoholic products and gambling is forbidden. Exemption on this is to Christian settlers only. 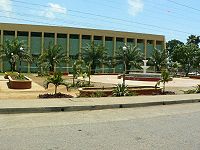