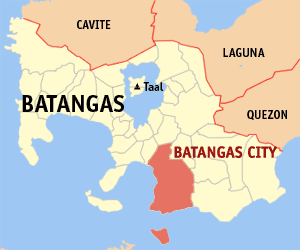 mapsize =
map_caption = Map of showing the location of City


Batangas City (Filipino: "Lungsod ng ") is a city in the province of Batangas, . It is the capital of, and largest city in, Batangas province. Batangas City is an important seaport and trade center for the province, which is a sugar-growing region. Silk and cotton fabrics and coconut oil are manufactured in the city. The city is also the largest seaport in the region. According to the census, it has a population of 295,231 people in 50,223 households.

Batangas City is a major recreational, religious, commercial, industrial and educational center in Province, as shown with the presence in the city of educational institutions (such as , , the , and Lyceum of ), the Basilica of the Immaculate Conception (Batangas City)|Basilica of the Immaculate Conception in the city center, City Batangas, as well as numerous hotels (such as Hotel Pontefino, Alpa Hotel, Country Club and ).

In 1581 Spanish authorities governing the created a in the area which included the hill (now Hilltop) where the present Provincial Capitol of stands after the formal end of the Coumintang Kingdom. The town was named "Batangan" because huge logs locally called "batang" abounded in the place. The Spanish government appointed Don Antonio Casulao as Batangan first . Said title of "little governor" as head of the or municipio was replaced in 1894 by "capital municipal." It is not clear who succedded Casulao nor is it known whether there were subsequent appoinments of capitan municipal.

City was severely damaged due to the bombardment which totally destroyed the Airport located in Alangilan-Balagtas area. [ [http://www.1stphilippines.com Batangas City's Airport destroyed During WWII] ] On October 14, 1943, municipal councilor Roman L. Perez was appointed Mayor by the after the inaguration of the Second Republic of the . By 1944 to 1945, Batangas City was liberated by the elements of the , and the with the aid of some Military Forces of the and the local Guerillas.

After the Liberation, Pres. issued his reappoinment. Mayor Perez ran and won in 194, the first post-War elections in the country. In November 1949 he was killed by an unknown assasin. Vice Mayor Atilano Magadia succedded the late Mayor Perez. He served until 1951. Mayor Macario Chavez was elected in 1951. His four-year term ended in 1955.

People voted Pedro S. Tolentino overwhelmingly as mayor in 1956. He was reelected three times. it was suring his fourth term (mid 1969) that Congress approved the Charter, a milestone event which made him the first city mayor of .

Meanwhile, on , , President opened Phase II project of the City International Container Port (with turn-over to the ). She also inspected a major road project in Southern Tagalog. She then inspected the P1.5-billion (STAR), Stage II-Phase 1 connecting (19.74 and and the Southern (SLEX) road widening, expansion and the STAR toll way development projects in . [ [http://www.abs-cbnnews.com/storypage.aspx?StoryId=106155 Abs-Cbn Interactive, President Arroyo inaugurates port project] ]

In 's "", is partially destroyed by a stolen copy of the M.I.D.A.S. experimental warhead dropped on an invading fleet from the air.