Santa Rosa, Laguna
Not to be confused with Laguna de Santa Rosa, a wetland area of California, United States of America. 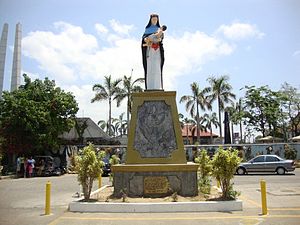 A statue of St. Rose of Lima fronting the parish church of the city proper.

The City of Santa Rosa (Filipino: Lungsod ng Santa Rosa) is a first class city in the province of Laguna, Philippines. It is also known as "The Lion City of the South" since 1994. The city lies 38 kilometers south of Manila via the South Luzon Expressway, making it a suburban residential community of Metro Manila.

This quiet town of Laguna started its progress initially from the establishment of Filsyn, CIGI and couple of other small multinational companies there when the government BOI provided for incentives to companies located at not less than 40 kilometers away from Manila. According to the latest census, City of Santa Rosa has a population of 266,943 inhabitants in 43,625 households, making it the third largest town or city in Laguna after Calamba City, and San Pedro. It is also the densest city in the province with more than 6,000 people per square kilometer.

Santa Rosa was mainly known for the Coca-Cola and Toyota manufacturing plants in its industrial estates. More recently it has also become famous for being the site of Enchanted Kingdom, a local theme park, as well as several housing developments. Santa Rosa is also the exit travellers take along the South Luzon Expressway to go to Tagaytay and Taal Volcano. This city contains the 3rd largest complex in Laguna, Paseo de Santa Rosa. Santa Rosa became a city by virtue of Republic Act No. 9264, which was ratified by the citizens on July 10, 2004.

In 2009, presence of Nuvali in Santa Rosa is making a huge impact in terms of putting the city in forefront of green development with functional living as seen on their Solenad area at Lake Evozone.

With the continuous expansion of Metro Manila, the city is now included in Manila Built Up Area which reaches Lipa City in its southernmost part. Santa Rosa City comes third in Laguna coming from Metro Manila, after San Pedro and Biñan City.

Santa Rosa City is one of the large distribution in the province of Laguna in terms of land area at approximately 54.13 square kilometers (5413 hectares). It is in the western section of Laguna de Bay.

The western portion of the city occupies the numerous commercial, industrial and business establishments and interesting places, it is also located the "center" of the city which is the busiest district of the city. While the northern portion is primarily residential areas and subdivisions, exclusive schools, industrial zones and various small and medium enterprises are also booming.

The beginning of Santa Rosa can be traced back in 1571, the year when Spanish conquistador Juan de Salcedo, the grandson of Miguel Lopez de Legazpi, discovered the town of Biñan which was annexed as a barrio to Tabuco (now the town of Cabuyao) while exploring the Laguna Lake region.

During the revolutionary period in 1898, the town was instrumental in the proclamation of Philippine independence from Spain when it signed the Act of Independence on June 12, 1898. Later on the town's local revolutionaries fought alongside the forces of Pio del Pilar during the Philippine-American War.

On February 5, 1945, the town was left abandoned by the Japanese soldiers when the local guerrilla resistance movement, with support from the American and Filipino military contingent, entered the town proper, where skirmishes, torture, and deaths occurred.

During the post-war era, until the 1970s, the townspeople were largely dependent on basic agriculture and family-owned enterprises for livelihood. The influence of industrialization slowly took shape in the 1980s with the entry of local and foreign investors who were instrumental in the fast-pace economic and social transformation of the town and the province.

Santa Rosa is the premier city and hub of South Luzon. It is the Makati of the South in terms of economic activity. Greenfield City is where most of Santa Rosa's financial resources are concentrated.

Major commercial banks in the Philippines operate in the city. At this time, there are 30 banking institutions offer banking services to businesses and residents. Most of these are concentrated in Barangay Balibago, Don Jose, Macabling, Pulong Santa Cruz, and Tagapo.

Santa Rosa is the 2nd municipality/city in Southern Luzon to have both an SM and Robinsons after SM City Dasmariñas in Cavite.

It is also the location for the headquarters of Santarosa Motor Works, Inc.

The City of Santa Rosa is also the location for the largest plant of The Coca-Cola Company in the Philippines, which is situated right across the Santa Rosa Exit of the South Luzon Expressway.

Santa Rosa lined up as one of Information Technology hub in the South and continuously growth of outsourcing and call centers, among them is Convergys, KGB, and Teletech.

Public transportation within the city, like in most of the urban areas in the Philippines, is facilitated mostly using inexpensive jeepneys and buses. Tricycles are used for short distances. In Laguna Bel Air, residents uses exclusive multicab shuttles within the village complex.

Santa Rosa's source of electricity is part of the Manila Electric Company or Meralco. Water supply for the city is supplied by the Laguna Water Inc. Santa Rosa's communication system is powered by the Philippine Long Distance Telephone company, and Digitel Philippines. Cellular network in the Philippines particularly the metropolitan areas is increasing rapidly together with the low cost of calls and text messaging. Such big companies that control the cellular networks in the Philippines and Santa Rosa itself are Globe Telecom, Smart Communications (PLDT) and Sun Cellular from Digitel. Cable television access is provided by SkyCable, and Royal Cable. Internet Digital Subscriber Line or DSL coverage is provided by PLDT, cable internet is serviced by Sky Cable's ZPDee and Global Destiny. Wireless broadband is provided by Globeliness Broadband and Smart Communications.

These are some of the notable events and festivities in Santa Rosa: 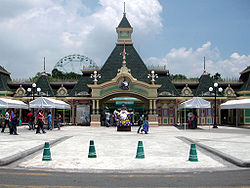 Here are some of Santa Rosa's tourist destinations:

EK Biki WaterWorld
Is a first world-class inflatable water park in the Philippines. It has a variety of six giant inflatable swimming pools with water slides, games and rides that families can enjoy in a safe and hygienic water environment.

Solenad
Solenad blends essential shopping with leisure and dining in a relaxing, al fresco, lakeside environment. The area is connected to the now operational Lakesize Evozone commercial area by dedicated pedestrian and bike lanes. The Lakeside Evozone is the refreshing campus-like commercial area of Nuvali. It creates a new space for offices and businesses to thrive in an environment of productivity and connectivity. Solenad sits at the entrance of the Lakeside Evozone area coming from the Sta. Rosa-Tagaytay Road, and is nestled next to a 4-hectare lake. Its accessible and picturesque location invites people to sit, sip and dine with family and friends. Solenad has also become a destination for the surrounding communities of Sta. Rosa, Calamba City, Tagaytay City and Manila. This is in collaboration with Ayala Land Inc., and Yulo Family.

Paseo de Santa Rosa
A flagship retail complex of Greenfield City launched in 1997. It is highly accessible to residents of surrounding communities. Paseo and its adjoining Althea Arcade are home to numerous enterprises ranging from restaurants, business centers, banks and salons. Demand has been brisk as plans are now underway to start expansion of the complex. It is located along the Santa Rosa – Tagaytay Road.

SM City Santa Rosa
A shopping center operated by SM Prime Holdings established on February 17, 2006. It is the first SM Supermall franchise in the province of Laguna.

Target Mall Santa Rosa
A shopping center located at the center of Santa Rosa Commercial Complex in Barrio Balibago. It is one of the pioneering establishments in the City of Santa Rosa.

Walter Mart Santa Rosa
A shopping center operated by Benison Group of Companies. Located at RSBS Blvd., San Lorenzo South, Balibago in Santa Rosa. It is known for its proximity to Enchanted Kingdom.

People native to Santa Rosa City refer to themselves as "Rosanians".

Like other places in Metro Manila, the original settlers are Tagalogs. Throughout the centuries, there has been constant migration of Spaniards, Visayans, Bikolanos, Ilokanos, Chinese and Americans.

The main language is Filipino, which is based on Tagalog. In addition, due to continuous development of the city, English language is used in education, business and information technology.

Santa Rosa City is governed primarily by the city mayor, the vice-mayor and the city councilors. The mayor acts as the chief executive of the city while the city councilors acts as its legislative body. The vice-mayor, besides taking on mayoral responsibilities in case of a temporary vacancy, acts as the presiding officer of the city legislature. The legislative body is composed of 10 regular members and representatives from the barangay and the youth council.

City of Santa Rosa is politically subdivided into 18 barangays.