Oriental Mindoro (Filipino: Silangang Mindoro, "Eastern Mindoro"; Spanish: Mindoro Oriental) is a province of the Philippines located in the island of Mindoro under MIMAROPA region in Luzon, about 140 km southwest of Manila. The province is bordered by the Verde Island Passage and the rest of Batangas to the north, by Marinduque, Maestro del Ocampo Island, Tablas Strait and the rest of Romblon to the east, by Semirara and the rest of Caluya Islands, Antique to the south, and by Occidental Mindoro to the west. Calapan City, the only city in the island, is the provincial capital.

Oriental Mindoro is touted as the country's emerging eco-tourism destination. In 2005, the Philippines was found to be the center of marine fish biodiversity and the home of the most diverse marine ecosystem in the world,[1] by American biologists Kent Carpenter and Victor Springer. Most of the endemic species in the Philippines are found in the Verde Island Passage between Mindoro island and the main island of Luzon. The passage houses 2,983 individual species of algae, corals, crustaceans, mollusks, fishes, marine reptiles, and marine mammals, based on a study conducted by scientists Carpenter and Springer in 2005.

Our study indicates, however, that there is a higher concentration of species per unit area in the Philippines than anywhere in Indonesia, including Wallacea... Special attention to marine conservation efforts in the Philippines is justified because of the identification of it as an epicenter of biodiversity and evolution.

UNESCO, declared Puerto Galera a biosphere reserve[2] under its Man and the Biosphere Programme in the 1970s. The Verde Island Passage is at the apex of the so-called Coral Triangle – the Philippines, Indonesia, and Malaysia – which has the distinction of being the "global center of marine biodiversity".

Based on the 2007 Census of Population, Oriental Mindoro has a population of 735,769 [3] which makes it the most populous province in the region. This is higher by 53,951 from the year 2000, resulting in an annual population growth rate of 1.06% during the seven-year period[3]

The province is largely rural, with 70% of the population engaged in agriculture and fishing and with only 30% living in urban centers. Tagalog is widely spoken in the province. Other languages spoken are Ilocano and Cebuano. Dialects of the Mangyan language are Arayan, Alagnan, Buhid, Hanunoo, and Tadyawan. Most of the population are of Roman Catholic stock.

The indigenous people of Oriental Mindoro are the Mangyans (Manguianes in Spanish, Mañguianes in Old Tagalog), consisting of 7 distinct tribes. They occupy the interior, specially the highlands. Mangyans have inhabited the island since pre-history. They are believed to have originally traveled from Indonesia and settled down for good in the island.

Higher Education Institutions in the province[4]:

Oriental Mindoro is composed of 14 municipalities, with one city, Calapan City serving as the provincial capital. 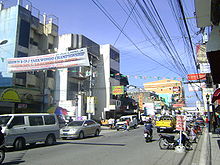 Calapan City in the northeast of Mindoro Island is the capital and largest city of the province of Oriental Mindoro.

The province has a total land area of 4,238.4 km²; with the western portion of the province being mountainous or rugged, hills and flood plains are widely distributed in the eastern portion. Mount Halcon, standing 2582 m above sea level, is the 18th highest mountain in the country and is the province's and island's highest peak. Lake Naujan, the fifth largest lake in the country with an area of approximately 8,125 ha of open water, is located at the northeastern part of the island and the province.

Oriental Mindoro's rich and arable land is suitable for agriculture. It is producing large quantities of rice, corn, coconut, vegetables and fruits like calamansi, banana, rambutan, marang or uloy, lanzones and durian. For that, Oriental Mindoro is also known as the Rice Granary and Fruit Basket of Southern Tagalog. It still is the Banana King and Calamansi King of the region. Its total agricultural area is 169, 603.34 hectares. Based on agricultural statistics, 85, 244 hectares are devoted to palay production while 21, 671 hectares to coconut plantation. The province, for the past years, registered an average of 1 to 2 million cavans as surplus in rice production.

Oriental Mindoro has no distinct wet or dry seasons. Average temperature ranges from 26 to 32 degrees celsius. The province experiences maximum rainfall during the months of June to October. Relative humidity is registered at 81%.

World War II wrought heavy damages, death and pain to the people of Mindoro. However, social conditions continued to exist without any definitive changes. After the war, reconstruction and rehabilitation of infrastructure and economy took place which ended with the division of the island into two provinces of Oriental Mindoro and Occidental Mindoro on June 13, 1950, by virtue of the Republic Act No. 505.

In the decades after the war, the island continued to become one of the preferred areas of new settlers coming from the overpopulated provinces in the Philippines in search of the new land. Apart from the hope to become landowners or to have better tenancy conditions, the guerrilla war (Huk rebellion) in Central Luzon was an important factor for migration. Under the settlement program of the National Resettlement and Rehabilitation Administration (NARRA) which was founded on June 18, 1954, families from Central Luzon were settled in the Bongabong-Pinamalayan area. This project ended in 1956 after the settlement of 606 families (3,636 people) on 8,600 hectares of public land. Since then new settlers have incessantly migrated to Mindoro until today.

There is currently a war going on between the Military and insurgents. On March 6, 2010, eleven soldiers were killed in a gunbattle with insurgents in Oriental Mindoro.

Access from Luzon thru the Batangas ports mostly goes thru the Verde Island Passage to reach the key entry point of Oriental Mindoro - Puerto Galera. In November 2004, Puerto Galera was voted a member of the UNESCO affiliated ‘The Club of the Most Beautiful Bays in the World'. PG is blessed with one of the world's most beautiful natural harbors which also protects ships, yachts and bancas from strong typhoons sweeping in from the Pacific during the rainy season. The Puerto Galera Yacht Club is likewise based here, and runs the Sailing Scholarship Fund, financed by donations and the proceeds from regattas, for the training of more than 100 local children who have brought in medals and awards in the yearly yacht and small boat events. PGYC runs yearly yachting and national dinghy events open to the local and international sailing community to promote the sport of sailing and responsible sailing tourism in the islands.

Puerto Galera, known for lovely white sand beaches and the unfortunate accompanying honky tonk bar scene on some key beaches, is more famous for its exquisite dive sites with a biodiversity of marine life in and around the coral reefs. Interesting UW rock formations and coral gardens are home to colorful marine life, like the numerous species of nudibranch, mantis shrimp, sea anemone, moray and sea fan sea horses. The seas off the coast boast passing dolphin pods, the rarer whaleshark and is part of the migratory small whale route from the Visayas.

Towering 8,488 feet above sea level, Mt. Halcon in Baco, is the country's third highest peak. It is a favorite mountain climbing destination for ecologically aware groups. Oriental Mindoro is also perfect for birdwatching activities of local and migratory species, and is home to mammals like the Tamaraw, an endemic straight-horned water buffalo, reptiles and plant species found nowhere else. Oriental Mindoro is also called and known now as the LUPAIN NG MAHALTA. Tamaraw (TA), various flora and fauna found on slopes of Mount Halcon (HAL) and the native Mangyans (MA), all together add vibrancy to the colors and the richness of nature and culture of the province.