The City of San Jose del Monte (CSJDM) (Filipino: Lungsod ng San Jose del Monte) is a first class suburban component city[1] in the province of Bulacan, Philippines. It is bordered by Caloocan City and Quezon City, both in Metro Manila, in the south; by Rodriguez, Rizal in the east; Santa Maria and Marilao, both of Bulacan, in the west and Norzagaray, Bulacan in the north. According to the 2007 census, it has a population of 439,090 inhabitants marking it the 19th most populated city in the Philippines.

The city is being governed by Mayor Reynaldo S. San Pedro, while Vice-Mayor Eduardo S. Roquero heads the Sangguniang Panglungsod; it is represented in the House of Representatives by Congressman Arthur B. Robes.

The major income earner of the city is large- and small-scale swine production. There are 60 commercial livestock and poultry farms in the city. The major poultry producers are RFM, Vitarich and FELDAN.

The city has experienced tremendous flood of revenues in the past few years. The P607,782,085.98 gross income surpassing the gross income of Meycauayan City and Malolos City (capital) reported by the city treasury office and Commission on Audit for the 2008 fiscal year represented an increase of 15.96% from the 524,135,505.09 total in 2007 three years after.

The income in 2008 has put the city at par with the major cities and municipalities in Bulacan like Meycauayan City, Malolos City, Baliuag and Santa Maria.

The city hosts four NHA resettlement projects of the national government and more than 150 residential subdivisions, including Pabahay 2000.

The Ospital ng Lungsod ng San Jose del Monte, a public hospital, is managed and operated by the city government, with subsidy from the provincial government. Five rural health units and sub-centers service the immediate health care needs of the community.

Programs addressed by city health officials include campaign drives against dengue, rabies, malnutrition, and smoking in public. There is a drive for regular garbage collection.

There are 128 schools offering elementary, secondary and tertiary education.

The city has now its own school division in compliance with R.A. 8797.

The city has a polytechnic — Bulacan Polytechnic College commonly known as BPC — at new site in Barangay Graceville.

The city complies with R.A. 6972, requiring every barangay to have a daycare center; 71 daycare centers are operating in the city.

Aside from the social welfare service accessible through the local government, non-government organizations provide social services to the socially, economically and physically disadvantage sectors in the city. 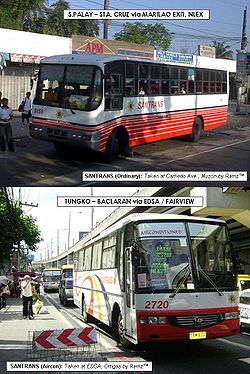 Santrans Bus Corp. — one of the bus companies based in SJDM

The city is serviced by bus routes going to and from, among others, Sapang Palay, Baclaran district in Pasay City, Muntinlupa (Alabang), Taguig City (FTI), Makati City, Quiapo and Sta. Cruz districts in Manila, Novaliches district in Quezon City and the Ninoy Aquino International Airport or NAIA. Jeepney routes also ply the roads between the city and neighboring cities and towns in Metro Manila and Bulacan province.

The bulk of the water requirement of the city is being served by the City Water District while some subdivisions have their own independent water supply system.

Power distribution is being undertaken by the Manila Electric Company Meralco. The city hosts the biggest Transco (Napocor) sub-station in the country in Barangay Dulong Bayan

Landline telephone systems are provided by the Digitel, PLDT, BayanTel and Globelines.

Like other cities in the Philippines, San Jose del Monte is governed by a mayor and vice mayor elected to three-year terms. The mayor is the executive head and leads the city's departments in executing the city ordinances and improving public services. The vice mayor heads a legislative council consisting of 12 members 6 from District I and 6 from District II. The council is in charge of creating the city's policies.

City of San Jose del Monte, being a part of the Bulacan province, has its mayor in the city council headed the Area Integrated Development Authority (AIDA). This council formulates development plans that seeks to solve the problems and improve the conditions in the metropolis.

The city is divided into 59 barangays which handle governance in a much smaller area. These barangays are grouped into two districts and the city has Lone District where district is duly represented by a congressman in the country's House of Representatives. 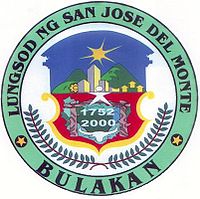 ^ He replace Noli Concepcion who won Barangay Captain in Muzon.

San Jose del Monte City is divided into two districts for representation purposes. It is politically subdivided into 59 barangays of which 23 barangays comprise the first district while 36 for the second district.