Negros Oriental (Cebuano: Sidlakang Negros) (also called Oriental Negros, "Eastern Negros") is a province of the Philippines located in the Central Visayas region. It occupies the south-eastern half of the island of Negros, with Negros Occidental comprising the north-western half. It also includes Apo Island — a popular dive site for both local and foreign tourists. Negros Oriental faces Cebu to the east across the Tañon Strait and Siquijor to the south east. The primary spoken language is Cebuano, and the predominant religious denomination is Roman Catholicism. Dumaguete City is the capital, seat of government, and most populous city.

Negros Island, the fourth largest island in the Philippines, is believed to have once been part of the island of Mindanao, but was cut off—either by continental drift or the rising waters at the end of the ice age.[3]

Among the early inhabitants of the island were dark-skinned peoples belonging to the Negrito ethnic group, as well as Han Chinese and Malays.[4] They called the island "Buglas", a native word which is believed to mean "cut off".[3]

Spanish explorers on the expedition of Miguel Lopez de Legazpi first came to the island in April 1565. Legazpi dropped anchor in Bohol and sent his men to scout the island.[4] Because of the strong currents of the Tañon Strait between Cebu and Negros, they were carried for several days and forced to land on the western side of the island. They reported seeing many dark-skinned inhabitants, and they called the island "Negros" ("Negro" means "black" in Spanish). The island was sparsely settled at the time, except for a few coastal settlements including Ilog and Binalbagan. In 1571, Legaspi assigned encomiendas on the island to 13 of his men.[4] Augustinian friars began the Christianization of the island the next year. The island was administered as part of the jurisdiction of Oton until 1734 when it became a military district, and Ilog became the capital of the island. The capital was transferred to Himamaylan in 1795. Negros became a politico-military province in 1856 and the capital was transferred to Bacolod.

Due to its proximity to Mindanao, the south eastern coast of Negros was in constant threat from Moro marauders looking for slaves, and watchtowers were built to protect the Christian villages. The Moro raids and Negros Oriental's distance from the Negros capital in Bacolod induced 13 Recollectionist priests to petition for the division of the island in July 1876.[4] The island of Negros was then divided into the provinces of Negros Oriental and Negros Occidental by a royal decree executed by Governor General Valeriano Weyler on January 1, 1890. Dumaguete City was made the first capital of Negros Oriental. In 1892, Siquijor became a part of Negros Oriental, having previously been administered by Spain under the politico-military province of Bohol.

During World War II, the province was invaded by Japanese forces and many residents were forced to flee to the mountains to escape. Negros Island was taken back from the combined Filipino & American troops with the Allied Negrosanon guerillas attacked Japanese on August 6, 1945.

On September 17, 1971, Siquijor finally became an independent province by virtue of Republic Act No. 6396. (See Province of Siquijor) 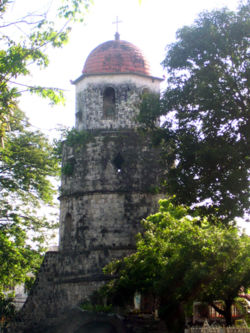 The Dumaguete Belfry was built in 1760s and 1870s to warn townfolks of attacks by maurading pirates.

The province's topography is characterized by low, grooved mountain ranges which mostly lie close to the shoreline. At the southern end of the province is the Cuernos de Negros (Horns of Negros) stratovolcano which rises to a height of 1864 meters. At the northern end of the province is Mount Canlaon, the highest peak in the island with a height of 2465 meters and an active volcano. There are a few plateaus in the interior to the west of the province. One of the landmarks of Dumaguete is the Dumaguete Bell Tower which stands next to the St Catherine of Alexandria Cathedral.[8] It once used to warn the city of impending pirate attacks.[9] 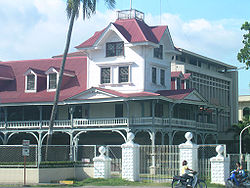 Negros Oriental's total population as of the 2000 census was 1,126,061, making it the 20th most populous province in the country.[11] 34.5% of the population is concentrated in the six most populous component LGUs of Dumaguete City, Bayawan City, Tanjay City, Bais City, Canlaon City, and Guihulngan. The province's average population density is 208 persons per km², lower than the national average of 276 persons per km². Population growth per year is about 2.11%, higher than the national average of 1.92%.[12]

Cebuano (sometimes known as Visayan) is the main language of the province, spoken by 95% of the population. Hiligaynon is spoken by the remaining 5%, and is common in areas close to the border with Negros Occidental. Filipino and English are generally understood, and are used for official, literary, and educational purposes.

Christianity is the predominant religion in the province with Roman Catholicism as the biggest single denomination. Other denominations include mainline and evangelical Protestant groups, the Iglesia Ni Cristo, the Seventh-day Adventists, Jehovah's Witnesses and the Aglipayan Church, also known as the Philippine Independent Church. Adherents of Islam and Buddhism constitute a minority of the population.

Dumaguete City, the provincial capital, is known as a university town due to the existence of many universities and colleges in the city.[13] These universities include: Silliman University (1901), the oldest American established university in Asia;[14] Saint Paul University of Dumaguete City (1904), the first Paulinian school in the Philippines; Negros Oriental State University (2004); and Foundation University(1949). The Colegio de Sta. Catalina De Alejandria (COSCA), Negros Oriental High School (1902) Ramon Teves Pastor Memorial-Dumaguete Science High School (1986); Dumaguete City High School (1967) and Don Bosco Schools can be also found in the city. There are also institutions and colleges inside (e.g. Metro Dumaguete College, STI, ASCST, Maxino College, PTC, AMA Computer College, ACSAT) and outside the city.

Each town in Negros Oriental celebrates an annual town fiesta, usually dedicated to a saint who is the patron of the town. In some of the larger towns, there are particular fiestas for specific neighborhoods or barangays.

Additionally, the Buglasan Festival, which was revived in 2001, is celebrated annually in October in the provincial capital of Dumaguete and is hailed as Negros Oriental's "festival of festivals".[15] It is a week-long celebration where you can see unique booths of each town and city in Negros Oriental featuring their native products and tourist attractions. The highlight of the occasion is the float parade and street dancing competition.[16]

With its vast fertile land resources, Negros Oriental's major industry is agriculture. The primary crops are sugarcane, corn, coconut and rice. In the coastal area, fishing is the main source of income. People are also involved in cattle ranches, fish ponds and logging. There are also mineral deposits like gold, silver and copper.

Negros Oriental is emerging as a technological center in Central Philippines with its growing business process outsourcing (BPO) and other technology-related industries. Negros Oriental is also becoming a notable tourist destination in the Visayas.

Dumaguete City is the provincial capital and seat of government. It is also the most populous city, despite having the smallest land area.

For purposes of legislative representation, the cities and municipalities are grouped into three congressional districts, with each district electing a congressman to the House of Representatives of the Philippines.

A motorized pedicab in Dumaguete City.

Negros Oriental has a network of roads, including a national road that spans the circumference of Negros Island. National and provincial roads in the province total more than 900 kilometers, though only about half of these are paved.[17]

A large portion of residents do not own private vehicles, and are totally reliant on public transport. The main form of public transport between the cities and municipalities of the province largely consists of privately operated jeepneys that link major towns to rural areas. For short distances within a town, motorized tricycles (locally known as pedicabs) are available.

The Dumaguete Airport located in Sibulan is the province's only government-operated airport.[17] It is a domestic airport with multiple daily flights to and from Manila, served by Philippine Airlines and Cebu Pacific. Based on 2002 statistics, an average of 5,800 outgoing passengers and 5,700 incoming passengers pass through the airport every month.[17]

The primary seaport of the province is located in Dumaguete City. Additionally, there are five other seaports in the province classified as tertiary.[18]