Santa Cruz is situated on the banks of the Santa Cruz River which course its way along the eastern part of the famous Laguna de Bay. The town is bounded by the Bay on the north, by Lumban and Pagsanjan towns in the east, Pagsanjan and Magdalena towns in the south, and Pila and Liliw towns in the west. It is approximately 87 kilometers from Manila via Calamba and 105 km via Pililla, in the province of Rizal. It is accessible by land from the nearby 28 municipalities and by water through Laguna de Bay from Manila and some Rizal towns.

Santa Cruz is considered as the service and commercial center on the eastern part of the province. The town is composed of five barangays in the Poblacion area and 21 classified urban barangays. Although relatively far from the immediate urbanizing influence of Metropolitan Manila, Santa Cruz continues to progress. It is now classified as first class municipality. The present administration is headed by the Honorable Mayor Dennis Panganiban. Santa Cruz is also the seat of the provincial government since 1885, giving the municipality an additional administrative function over the entire province. It also functions as the service center for transportation, commerce, health, education, and other social services for the predominantly rural northeastern municipalities of the province. Boosting the economy of the municipality are the incipient and fast growing agribusiness industries such as livestock raising, horticulture and aquaculture. The town is composed of twenty-six (26) urban barangays. All barangays are being classified as urban.

The development of Santa Cruz as the administrative, commercial, and service center of Laguna makes it accessible for all private/public vehicles going to nearby places particularly Pagsanjan, Lake Caliraya, Liliw, Paete and Nagcarlan.

During the last decade of the 16th century, Santa Cruz, the premier town of Laguna was once a well populated barrio of the present municipality of Lumban, as well as other contemporary towns like Pagsanjan, Cavinti, Paete and Pangil. In 1602, Santa Cruz separated from Lumban and became a pueblo with its church and local government.

It is a town which since its foundation in 1602, had been ravaged by calamitous forces such as fires, typhoons, floods and human vandalism during the Philippine Revolution of 1896-1899, the war of the Philippine Independence (1899–1902), Battle of Santa Cruz the assault of the Tulisanes (bandits) during the Spanish times, and the beginning to the Filipino troops of the pre-war 4th and 42nd Infantry Division of the Philippine Commonwealth Army and recognized guerrillas from the Second Battle of Santa Cruz on January 26, 1945. Santa Cruz survived all these disastrous calamities , for it is patiently resilient as the durable bamboos and as indestructible as the Rock of all Ages.

Characterized by fertile flat lands situated along the coastal plains of Laguna de Bay, the economic base of the town had been traditionally anchored on two primary industries, namely agriculture and fishing which still remain up to the present. In view of the strategic location of Santa Cruz relative to the other coastal settlements about the lake, trading activities have likewise rooted on the town during those early settlement days. The town proper which has always been the focal point of activities used to be accessible to the other lake-shore areas due to the navigable Santa Cruz River aside from the Laguna de Bay itself. Since those early days, water is the principal mode of transportation.

Today, Santa Cruz serves as the capital of Laguna and is considered as the business and commercial center on the eastern part of the province.[1]

Situated at the central portion of Laguna province along the southeastern coast of Laguna de Bay, the Municipality of Santa Cruz lies approximately 87 kilometers southeast of Metro Manila via Calamba and is geographically located at approximately 14 degrees 17' latitude and 121 degrees 25' longitude. The municipality is bounded on the north and northwest by Laguna de Bay, on the northeast by Lumban, on the east by Pagsanjan, on the southeast by Magdalena , on the south by Liliw,, and on the southwest by Pila. It has 26 barangays and covers approximate land area of 3860 hectares which comprises about 2% of the total land area of Laguna Province.

Like most areas in the province of Laguna, the climate of Santa Cruz is characterized by two pronounced seasons: dry from January to April and wet during the rest of the year. The municipality has annual temperature of 27.2 degree Celsius and annual rainfall of 1962.7mm. Northeasterly winds with an average wind speed of 9 knots prevail in the municipality. 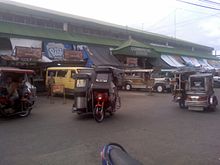 Being the provincial capital of Laguna, Santa Cruz serves as service center of the province particularly for the municipalities on its northeastern part. As such, the town is expected to continue to fulfill this established role in the years to come.

Trade and commerce shall remain to be one of the primary economic activities in the locality. The presence of jeepney services plying Lumban, Paete, Siniloan, San Pablo, Pila, Victoria, Cavinti-Caliraya, Luisiana, Majayjay, Calumpang, Nagcarlan, Liliw, Magdalena, Pagsanjan, and Calamba has further enhanced the municipality's role as a commerce and trade center.

The center of business activities is in the poblacion specifically at Barangay V where the four (4) buildings of Public Market is situated. Within this vicinity are the MOTORWORLD Sales Center, Joy Supermarket, Centro Department Store, and Goodwill Supermarket. Development in this vicinity has been a quasi-residential commercial type as manifested by the proliferation of structures which are used both for business and residential purposes by the proprietors/owners. There is also concentration of business establishments at the section of the national highway/expressway especially Barangay Gatid where the Sunstar Mall is located, and the abandoned PNR Railway (road) while a strip pattern of commercial development is noticeable along the Quezon Avenue and along the old highway and Pedro Guevarra Avenue.

Santa Cruz has many establishment that contribute to its development.

Sterling Paper Group of Companies, which started as maker of photo albums and stationery is now a conglomerate of a successful business ranging from greeting cards, school and office supplies, toys to real estate and agri-business.

Santa Cruz may not have natural tourist spots and no wide areas to develop but one thing the townsmen of Santa Cruz are proud of are the local foods available in the town. Santa Cruz boasts of the famous white cheese or kesong puti, freshly made from carabao's milk.