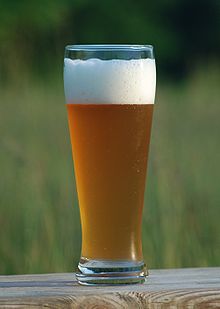 Wheat beer is a beer that is brewed with a large proportion of wheat. Wheat beers often also contain a significant proportion of malted barley. Wheat beers are usually top-fermented (as required by law in Germany).[1] The flavor of wheat beers varies considerably, depending upon the specific style.

The main varieties are weissbier, witbier, and the sour varieties, such as lambic.

Two common varieties of wheat beer are witbier (Dutch - "white beer") based on the Belgian tradition of using flavorings such as coriander and orange peel which was revived by Pierre Celis at Hoegaarden,[2][3] and weissbier (German - "white beer") based on the German tradition of mixing at least 50% wheat to barley malt to make a light coloured top-fermenting beer.[4] Both the Belgian witbier and the German weissbier were termed "white beers" because historically they are pale unfiltered and have a hazy appearance due to the type of yeast. Belgian white beers are often made with raw unmalted wheat, as opposed to the malted wheat used in other varieties.

German wheat beers are called weizen ("wheat") in the western (Baden-Württemberg) and northern regions, and weissbier or weiss ("white beer" or "white") in Bavaria. Hefeweizen (the prefix "hefe" is German for yeast) is the name for unfiltered wheat beers, while kristallweizen ("kristall" being German for crystal) is the same beer filtered.

Breweries in other countries, particularly the U.S. and Canada, will brew wheat beers based on these two main traditions using special wheat beer yeasts.[5]

Sour beers such as Berliner Weisse, gose, and lambic are made with a significant proportion of wheat.

In Britain, wheat beer is not considered traditional, but several brewers produce cask-conditioned varieties, such as Fuller's Discovery, Oakleaf Eichenblatt Bitte, Hoskins White Dolphin, Fyfe Weiss Squad and Oakham White Dwarf. British wheat beer tends to be a hybrid of the continental style with an English bitter, rather than an exact emulation.[6][7] 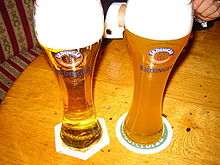 A kristallweizen (left) and a hefeweizen (right)

Weissbier (Weißbier in German) refers to several different types of wheat beer. The terms "hefeweizen" or "hefeweissbier" refer to wheat beer in its traditional, unfiltered form. The term kristallweizen (crystal wheat), or kristall weiss (crystal white beer), refers to a wheat beer that is filtered to remove the yeast from suspension. Additionally, the filtration process removes wheat proteins present in the beer which contribute to its cloudy appearance.

The hefeweizen style is particularly noted for its low hop bitterness (about 15 IBUs) and relatively high carbonation (approaching four volumes), considered important to balance the beer's relatively malty sweetness. Another balancing flavour note unique to hefeweizen beer is its phenolic character; its signature phenol is 4-vinyl guaiacol,[8] a metabolite of ferulic acid, the result of fermentation by top-fermenting yeast appropriate for the style. Hefeweizen's phenolic character has been described as "clove" and "medicinal" ("Band-aid") but also smoky. Other more typical but less assertive flavour notes produced by Weissbier yeast include "banana" (amyl acetate), "bubble gum", and sometimes "vanilla" (vanillin).

Weissbier is available in a number of other forms including dunkelweizen (dark wheat) and weizenstarkbier (strong wheat beer), commonly referred to as weizenbock. The dark wheat varieties are made with darker, more highly-kilned malts (both wheat and barley). The weizenbocks typically have a much higher alcohol content than their lighter cousins.

Witbier, white beer, (French: la bière blanche), or simply witte is a barley/wheat, top-fermented beer brewed mainly in Belgium and the Netherlands. It gets its name due to suspended yeast and wheat proteins which cause the beer to look hazy, or white, when cold. It is a descendant from those medieval beers which were not brewed with hops, but instead flavoured and preserved with a blend of spices and other plants referred to as "gruit". It therefore still uses gruit, although nowadays the gruit consists mainly of coriander, orange, bitter orange, and hops. The taste is therefore only slightly hoppy. The beers have a somewhat sour taste due to the presence of lactic acid.[9][10] The suspended yeast in the beer causes some continuing fermentation in the bottle.

Witbier differs from other varieties of wheat beer in the use of gruit. French regulation (the territory was French in the 14th century) excluded the use of hops in gruit. Witbier can be made with raw wheat, in addition to wheat malt.[9][11]

A minor variety of wheat beer is represented by Berliner Weisse (Berlin White), which is low in alcohol (2.5% to 3% ABV) and quite tart. Although it can be imbibed by itself, enthusiasts often add sweetened syrups of lemon, raspberry or woodruff herb into the beer.

Leipziger Gose is similar to Berliner Weisse but slightly stronger at around 4% ABV. Its ingredients include coriander and salt, which means it does not comply with the Reinheitsgebot. Both Gose and Berliner Weisse acquire their sourness through the use of lactic acid bacteria in the fermentation in addition to yeast.

The Belgian lambic is also made with wheat and barley, but differs from witbier in its yeast. Lambic is a brew of spontaneous fermentation.

Names and types of wheat beer

According to the place in which the beer is brewed and small variations on the recipe, several different names are used for wheat beer:

Kristallweizen (especially in Austria) and American styles of wheat beer are sometimes served with a slice of lemon or orange in the glass; this is generally frowned upon in Bavaria.[1]

In northern Bavaria, it is common to add a grain of rice to kristallweizen, which causes a gentle bubbling effect and results in a longer lasting foam.[12] A common item on pub menus in Bavaria is cola-weizen, which is a mix of cola and weizenbier. Often this is referred to as a "Neger" - the German term for a negro. If weizen-bock is used instead of normal weizen it is called a "Turbo-Neger".

Another mixture popular during the summer is a 50-50 mix of Weissbier with lemonade, called "Russ". The german term for Russian

In different parts of Germany bananenweizen (wheat beer with banana nectar mixed in) is very popular, as well as cola-weizen which consists of equal parts of wheat beer and some sort of cola.