Lager (German: storage) is a type of beer made from malted barley that is brewed and stored at low temperatures. There are many types of lager; pale lager is the most widely-consumed and commercially available style of beer in the world; Pilsner, Bock, Dortmunder Export and Märzen are all styles of lager. There are also dark lagers, such as Dunkel and Schwarzbier.

While cold storage of beer, "lagering," in caves for example, was a common practice throughout the medieval period, bottom-fermenting yeast seems to have emerged as a hybridization in the early 1400s. However, in 2011 an international team of researchers writing in the Proceedings of the National Academy of Sciences claimed to have discovered that Saccharomyces eubayanus, a yeast native to Patagonia is responsible for creating the hybrid yeast used to make lager.[1][2]

The average lager in worldwide production is a pale lager in the Export or Pilsner styles. The flavor of these lighter lagers is usually mild and the producers often recommend that the beers be served refrigerated. However, the examples of lager beers produced worldwide vary greatly in flavor, color, and composition.

In colour, helles represent the lightest lager at as pale a colour as 6 EBC. The darkest are Baltic porters, which can be as dark as 400 EBC; darker German lagers are often referred to as Dunkels.

The organism most often associated with lager brewing is Saccharomyces pastorianus, a close relative of Saccharomyces cerevisiae.

In strength, lagers represent some of the world's most alcoholic beers. The very strongest lagers often fall into the German-originated doppelbock style, with the strongest of these, the commercially-produced Samichlaus, reaching 14% ABV. 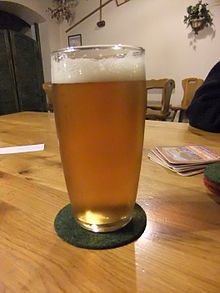 A glass of Czech lager rests on a beermat

Lagers in certain countries often feature large proportions of adjuncts, usually rice or maize. Adjuncts entered American brewing as a means of thinning out the body of American beers, balancing the large quantities of protein introduced by six-row barley. Adjuncts are often used now in beermaking to introduce a large quantity of sugar, and thereby increase ABV, at a lower price than a formulation using an all-malt grain bill. Not always used to reduce prices, adjuncts may actually cost more than malt in many cases.[3]

Pale lager is a very pale to golden-coloured lager with a well attenuated body and noble hop bitterness. The brewing process for this beer developed in the mid 19th century when Gabriel Sedlmayr took pale ale brewing techniques back to the Spaten Brewery in Germany and applied it to existing lagering brewing methods. This approach was picked up by other brewers, most notably Josef Groll who produced Pilsner Urquell. The resulting pale coloured, lean and stable beers were very successful and gradually spread around the globe to become the most common form of beer consumed in the world today[citation needed].

The main elements of the lagering method used by Sedlmayr and Groll are still used today, and depend on a slow acting yeast that ferments at a low temperature while being stored. Indeed, the German term 'Lager' means 'storage'. While first marketed as 'Lagerbier' in Austria and Germany, the term is now quite uncommon in the German speaking countries where today one would simply ask for 'helles Bier' (pale lager), 'dunkles Bier' (dark lager) or specific varieties, particularly those with a distinctive character such as Pilsner.

Lagers would likely have been mainly dark until the 1840s; pale lagers were not common until the later part of the 19th century when technological advances made them easier to produce.[4] Dark lagers typically range in colour from amber to dark reddish brown, and may be termed dunkel, schwarzbier, Vienna, tmavé or Baltic porter depending on region or brewing method. Tmavé is Czech for "dark", so is the term for a dark beer in the Czech republic - beers which are so dark as to be black are termed černé pivo, "black beer".[5] Dunkel is German for "dark", so is the term for a dark beer in Germany. With alcohol concentrations of 4.5% to 6% by volume, dunkels are weaker than Doppelbocks, another traditional dark Bavarian beer. Dunkels were the original style of the Bavarian villages and countryside.[6] Schwarzbier, a much darker, almost black beer with a chocolate or liquorice-like flavour, similar to stout, is mainly brewed in Saxony and Thuringia.

Vienna lager was developed by brewer Anton Dreher in Vienna in 1841. Austrian brewers who emigrated to Mexico in the late 19th century took the style with them. Vienna lager is a reddish-brown or copper-colored beer with medium body and slight malt sweetness. The malt aroma and flavor may have a toasted character.[7]