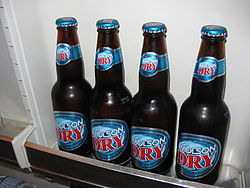 Beer in Canada was introduced by European settlers in the seventeenth century, and a number of commercial brewers thrived until Prohibition in Canada. Though short-lived, very few brewers survived, and it was only in the late twentieth century that new breweries opened up. The Canadian Beer industry now plays an important role in Canadian identity, though globalization of the brewing industry has seen the major players in Canada acquired by or merged with foreign companies, notably its three largest beer producers, Labatt, Molson and Sleeman. The result is that Moosehead has become the largest fully Canadian-owned brewer.

Beer is the most popular alcoholic beverage in Canada, in term of both volume and dollar value.[1] In 2009 beer claimed 46% of the dollar value of alcoholic beverages sold in Canada. This compares to 29% for wine. Statistics Canada figures show that liquor sales in Canada amounted to $19.4 billion worth of alcoholic beverages, up 3.3 per cent from the year before. Beer sales totalled $8.8 billion, Wine $5.7 billion and spirits $4.9 billion. 2.3 billion litres of beer were sold in 2009, a 0.9 per cent increase from the previous year. Per-capita beer sales have dropped 28 per cent from their peak of 115.2 litres in 1976 to 83.5 litres in 2009. By volume, imported beer has more than doubled its market share in the last decade. In 2009, imported beer had captured 13% of the beer market in Canada, up from six per cent in 1999.[2]

Beer was first introduced to Canada by European settlers in the seventeenth century, as Canada had an ideal climate for making beer before refrigeration was introduced. The first commercial brewery was built by Jean Talon in Quebec City, in the year 1668. Over a century later a number of commercial brewers thrived, including some that became the staple of the Canadian industry: John Molson founded a brewery in Montreal in 1786, Alexander Keith in Halifax in 1820, Thomas Carling in London in 1840, John Kinder Labatt in 1847, also in London, Susannah Oland in Halifax in 1867, and Eugene O'Keefe in Toronto in 1891. The very first patent to be issued by the Canadian government on July 6, 1842, was to one G. Riley for "an improved method of brewing ale, beer, porter, and other maltliquors."

Prohibition in Canada did not last as long as in the U.S. and was largely over by the mid 1920s (apart from Prince Edward Island, where it ran from 1901 to 1948), although the sale of beverage alcohol products remained heavily controlled by liquor boards and publicly owned stores in each of the provinces afterwards. Nevertheless, it had a similar effect of leaving very few brewers, and it was only in the late twentieth century that there has been a revival and microbreweries have started. Brewpubs are still illegal in some provinces, however.[citation needed]

The brewing had become extremely concentrated in Canada by the 1970s, being dominated by just three companies (Molson, Labatt, and Carling-O'Keefe). The revival of craft brewing dates from the early 1980s, according to Ian Coutts, in his book Brew North: How Canadians Made Beer and Beer Made Canada as a result of disparate and random factors. The factors included an article in May/June 1978 issue of Harrowsmith magazine by a former O'Keefe employee decrying the state of the business, the creation of the Campaign for Real Ale in the United Kingdom, the revival of smaller brewers in the United States beginning with Anchor Brewing in 1965, the 1981 deregulation of beer prices in British Columbia by minister Peter Hynd­man and the resulting price hikes by the incumbents. In June 1982, the Horseshoe Bay Brewery in West Vancouver opened, creating one of Canada's first microbreweries.[3]

Canada's largest brewing companies were traditionally Labatt's and Molson. Labatt's was purchased in 1995 by the Belgian company Interbrew (now part of Brazilian-Belgian Anheuser-Busch InBev, the world's largest brewing company) and Molson merged with US company Coors in 2005 to create Molson Coors, now the world's fifth largest brewing company. With the purchase of Sleeman Breweries, the largest remaining Canadian brewer, in 2006 by the Japanese owned Sapporo Brewery, Canada’s beer production has been mainly under the control of foreign multinationals. By the end of 2006, nearly 90% of beer sales was of product brewed domestically under license from non-domestic corporations.[4] American beers brewed under license dominate much of the market. The market in Canada for domestic beer is dominated by Labatt, Molson and Sleeman, all foreign-owned companies. The largest Canadian-owned brewer, Moosehead Brewery, controls about 5.5% of the Canadian market.[5]

Government regulations require that all beer sold in Canada show the alcohol by volume on the label. A standard bottle of beer (12 imperial fl oz/341 mL and five percent alcohol by volume) which makes 21.6 mL of alcohol (17.05 g). The percentage of alcohol is expressed in weight per volume (g/100ml) so it means grams of alcohol per 100 ml of solution (fluid in the bottle). It means that a 78.9% alcohol liquid would be pure meaning only pure ethanol. In most nations, the labelled alcohol percentage is either the average or maximum percentage allowed. However, as of 1927, most Canadian provinces require the minimum alcohol percentage to be labelled rather than the average. This move was meant to eliminate inaccurate nonalcoholic labelling as well as fraudulent advertisement.[6]

In English Canada the most popular types are pale lager like Molson Canadian and Labatt Blue, although ales are also consumed. In Quebec ales such as La Fin du Monde, Molson Export and Labatt 50 are also popular. Foreign and more exotic types of beers are becoming increasingly popular.

An overview of the types of beer brewed in Canada can be surmised from looking at the list of categories at the Canadian Brewing Awards. As of 2010[update], the categories were:[7]

Ice beer originated in Canada, though it is essentially based on the German Eisbock style of beer. The first ice beer marketed in the United States was Molson Ice [8] which was introduced in April 1993, although the process was patented earlier by Labatt, instigating the so-called "Ice Beer Wars" of the 1990s.[9]

The process of icing beer is done by bringing the temperature of a batch of beer down to or just below the freezing point of water (32°F or 0°C), the greatest constituent of beer. Because water freezes at a higher temperature than alcohol, the water becomes frozen and the alcohol stays a liquid. Because of this, a layer of ice can be skimmed from the surface of beer (hence the name "ice" beer). This creates a concoction with a higher volume ratio of alcohol to water and therefore creating a beer with a higher alcohol content by volume.

Labatt patented a process where beer is pumped through a tank of ice crystals before filtration. The freezing of beer allowed the removal of protein-polyphenol compounds, creating a smoother, more colloidally stable beer, and avoiding long aging time.

Molson Coors launched a microcarbonated lager beer called Molson M in November 2010. The beer was created in Montreal and is made by injecting the brew with carbon dioxide through smaller, finer bubbles.[10] The beer was designed as an up-scale product and is heavily marketed in Canada, but some have called it nothing more than a gimmick, with a taste that rivals regularly carbonated beers.[11]

A microbrewery industry has arisen in Canada, satisfying niche tastes and providing localized offerings. However, most microbreweries only supply local markets and nationally, only beers produced by large breweries are generally available. This is compounded by the fact that the larger brewers like Molson have ownership stakes in the many retail outlets such as Brewers Retail in Ontario.

CBC Radio One's Radio Active and Vue Weekly beer columnist and creator of onbeer.org Jason Foster argues that Canadian regional styles of craft brewing reflect the history and culture of those regions, often based on the origins of the people who settled there. He argues, for example, that Atlantic Canada is associated with the British styles and Quebec with Belgian styles due to their settlement history. Ontario has a more "mainstream", "conservative" style — with German and eastern American influences) — due to Ontario being the "core" of English Canadian culture. British Columbia has an "eccentric" style, influenced by the U.S. West Coast, with a noted presence of fruit beers and organic beers drawing from that region's culture of environmentalism.

The prairie craft beer scene reflects its homesteading pioneer tradition with breweries that are hardy, determined and willing to try new things.[12]

Prior to 1961, Canadian beer was sold, and served, in two sizes, colloquially known as "quarts" and "pints," or "large" and "small." They were 22 and 12 Imperial fluid ounces (625 and 341 mL), respectively, whereas a true Imperial quart was 40 fluid ounces. Over the years, some provinces banned the sale of beer in the larger bottle. For example, in Ontario in the 1950s only the pint could be sold, but in Quebec both sizes were about equally common. In 1961, both sizes were replaced, nationwide, by the standardized bottle, equal in volume to the "small" and affectionately known as the "stubby."

Stubbies are a type of bottle which is shorter and with a slightly larger diameter than the now predominant longneck bottle. Starting in 1962 almost all beer in Canada was sold in stubbies until the beer companies chose to switch to the American-style longneck bottle, between 1982 and 1986. The last major label to be available in the stubby was Labatt's Crystal which switched to the longneck in the summer of 1986.

Beer festivals in Canada include the Great Canadian Beer Festival, which since 1993 (with help from the Victoria chapter of the Campaign for Real Ale (CAMRA)) has focused on cask ales from the Pacific Northwest. Since 2005 the festival has been held at Royal Athletic Park on the first weekend after Labour Day. The festival attracts over 40 craft breweries from across Canada and the Pacific North-western USA and more than 7000 visitors.[13][14] The Kitchener-Waterloo Oktoberfest is a nine-day event in Kitchener-Waterloo, which started in 1969 influenced by the original German Oktoberfest.[15] It is held every October, starting on the Friday before Canadian Thanksgiving and running until the Saturday after. Toronto's Festival of Beer was first held in 1995 at Fort York in Toronto, though has been held at Exhibition Place since 2009.[16] There is also the Lauder Beer Festival which is a much smaller and more exclusive festival held in the North end of Toronto. In 2010, the Ontario Craft Brewers started Ontario Craft Beer Week, a week-long craft beer celebration across the province.[17] The Mondial de la Bière was founded in 1994 in Montreal and attracts around 80,000 people,[18] while Quebec City held its first beer festival, the Festibière,[19] in 2010. A beer festival also took place in Ottawa in 2003.[20]

The Golden Tap Awards is an annual beer awards event held in Toronto. The awards are sponsored and presented by The Bar Towel, a website and forum dedicated to the discussion and promotion of Toronto's craft and microbrew beer scene.[21]