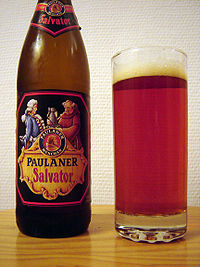 Bock is a strong lager of German origin. Several substyles exist, including maibock or helles bock, a paler, more hopped version generally made for consumption at spring festivals; doppelbock, a stronger and maltier version; and eisbock, a much stronger version made by partially freezing the beer and removing the water ice that forms.

Originally a dark beer, a modern bock can range from light copper to brown in colour.[1] The style is very popular, with many examples brewed internationally.

The style known now as bock was a dark, malty, lightly hopped ale first brewed in the 14th century by German brewers in the Hanseatic town of Einbeck.[2] The style from Einbeck was later adopted by Munich brewers in the 17th century and adapted to the new lager style of brewing. Due to their Bavarian accent, citizens of Munich pronounced "Einbeck" as "ein Bock" ("a billy goat"), and thus the beer became known as "bock". To this day, as a visual pun, a goat often appears on bock labels.[2]

Bock is historically associated with special occasions, often religious festivals such as Christmas, Easter or Lent. Bocks have a long history of being brewed and consumed by Bavarian monks as a source of nutrition during times of fasting.[3]

The styles of bock

Ayinger Celebrator Doppelbock. The goats on the label are a visual pun: ein bock means a billy goat.

Traditional bock is a sweet, relatively strong (6.3%–7.2% by volume), lightly hopped (20-27 IBUs) lager. The beer should be clear, and colour can range from light copper to brown, with a bountiful and persistent off-white head. The aroma should be malty and toasty, possibly with hints of alcohol, but no detectable hops or fruitiness. The mouthfeel is smooth, with low to moderate carbonation and no astringency. The taste is rich and toasty, sometimes with a bit of caramel. Again, hop presence is low to undetectable, providing just enough bitterness so that the sweetness is not cloying and the aftertaste is muted.[1] The following commercial products are indicative of the style: Einbecker Ur-Bock Dunkel, Pennsylvania Brewing St. Nick Bock, Aass Bock, Great Lakes Rockefeller Bock, Stegmaier Brewhouse Bock.

The maibock style is a helles lager brewed to bock strength, therefore still as strong as traditional bock, but lighter in colour and with more hop presence. It is a fairly recent development compared to other styles of bock beers, frequently associated with springtime and the month of May. Colour can range from deep gold to light amber with a large, creamy, persistent white head, and moderate to moderately high carbonation, while alcohol content ranges from 6.3% to 7.4% by volume. The flavour is typically less malty than a traditional bock, and may be drier, hoppier, and more bitter, but still with a relatively low hop flavour, with a mild spicy or peppery quality from the hops, increased carbonation and alcohol content. The following commercial products are indicative of the style: Ayinger Maibock, Mahr’s Bock, Hacker-Pschorr Hubertus Bock, Capital Maibock, Einbecker Mai-Urbock, Hofbräu Maibock, Victory St. Boisterous, Gordon Biersch Blonde Bock, Smuttynose Maibock, and, despite the name, Rogue Ales Dead Guy Ale.

Doppelbock or double bock is a stronger version of traditional bock that was first brewed in Munich by the Paulaner monks, an order founded by St. Francis of Paula.[3] Historically, doppelbock was high in alcohol and sweet, thus serving as "liquid bread" for the monks during times of fasting, when solid food was not permitted. Today, doppelbock is still strong—ranging from 7%–12% or more by volume. It is clear, with colour ranging from dark gold, for the paler version, to dark brown with ruby highlights for darker version. It has a large, creamy, persistent head (although head retention may be impaired by alcohol in the stronger versions). The aroma is intensely malty, with some toasty notes, and possibly some alcohol presence as well; darker versions may have a chocolate-like or fruity aroma. The flavour is very rich and malty, with toasty notes and noticeable alcoholic strength, and little or no detectable hops (16–26 IBUs). Paler versions may have a drier finish. The monks who originally brewed doppelbock named their beer "Salvator" ("Savior"), which today is trademarked by Paulaner.[3] Brewers of modern dopplebocks often add "-ator" to their beer's name as a signpost of the style; there are 200 "-ator" doppelbock names registered with the German patent office.[3] The following are representative examples of the style: Paulaner Salvator, Ayinger Celebrator, Weihenstephaner Korbinian, Andechser Doppelbock Dunkel, Spaten Optimator, Tucher Bajuvator, Weltenburger Kloster Asam-Bock, Capital Autumnal Fire, EKU 28, Eggenberg Urbock 23º, Bell’s Consecrator, Moretti La Rossa, Samuel Adams Double Bock, Troegs Troegenator Double Bock. 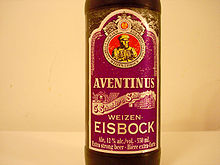 Eisbock is a traditional specialty beer of the Kulmbach district of Germany that is made by partially freezing a doppelbock and removing the water ice to concentrate the flavour and alcohol content, which ranges from 9% to 13% by volume. It is clear, with a colour ranging from deep copper to dark brown in colour, often with ruby highlights. Although it can pour with a thin off-white head, head retention is frequently impaired by the higher alcohol content. The aroma is intense, with no hop presence, but frequently can contain fruity notes, especially of prunes, raisins, and plums. Mouthfeel is full and smooth, with significant alcohol, although this should not be hot or sharp. The flavour is rich and sweet, often with toasty notes, and sometimes hints of chocolate, always balanced by a significant alcohol presence. The following are representative examples of the style: Kulmbacher Reichelbräu Eisbock, Eggenberg Urbock Dunkel Eisbock, Capital Eisphyre, Southampton Eisbock.

In Austria, bockbier is traditionally brewed only around Christmas and Easter, when nearly every brewery brews its own bock.

There are several beers brewed in Argentina which are termed bock, including Araucana Negra Bock,[4] Quilmes Bock,[5] and Blest Bock.[6]

A number of bock beers are produced, including Chouffe Bok and "Leute Bok" from the Van Steenberge brewer, brewed since 1927. Belgium-based InBev produces Artois Bock,[7] which is exported internationally and can be found in areas where bock is not traditionally available.

In Brazil, Kaiser is one of the breweries that sells bock beer, called Kaiser Bock. This beer is available only in the months of fall and winter (April to September). Usually Brazilian bocks are produced by local breweries or craft breweries, especially in the cities of German settlement in Santa Catarina State and also in Petrópolis, state of Rio de Janeiro.

Bock is a popular style, made by breweries across the country, including:

Kross brewery from Curacavi is producing a maibock (6.3% abv)

Inducerv S.A.S. brews a Bock (6.0% vol) under their Apóstol brand with german ingredients. The brewery is located in the city of Sabaneta, near Medellín[9].

Bock is an unusual style in the UK, but a few examples exist. The Robert Cains brewery in Liverpool brews Cains Double Bock beer at 8 % ABV, and the Dark Star Brewery, West Sussex, produce a 5.6%ABV Maibock.

Bock beer is produced in Mexico around Christmas season, under the Noche Buena label.

Bock beer is produced and distributed under the Urbock label by Namibian Breweries. Like other Namibian Breweries beers, it is available in some of the neighbouring countries in Southern Africa, especially South Africa. The brewery also produces a maibock sporadically.

A variation of bock called 'bokbier' is also brewed extensively in the Netherlands and occasionally in Belgium. Most larger Dutch breweries, such as Heineken International, Grolsch, Amstel, Alfa Brouwerij, Brand and Dommelsch, market at least one variety. Most bokbiers tend to be seasonal beers (traditionally autumn, although there are currently also spring, summer and winter boks). They are among the only few specialty beers that existed besides lager for a long time. Microbreweries may prefer to seasonally brew a bokbier, such as the eco-beer biobok, made in autumn by Brouwerij 't IJ in Amsterdam. The consumers' organization PINT holds a bok festival every winter at the Beurs in Amsterdam.

Bocks are also brewed in Norway, where they are known as "bokkøl" (bockbeers) and available during the whole year. Notable examples of bock brands are Aass, Borg, Frydenlund and Mack.

Bock and its substyles are popular in all parts of the country. A short list includes: