Houttuynia cordata is a herbaceous perennial plant growing to between 20 and 80 cm. The proximal part of the stem is trailing and produces adventitious roots, while the distal part of the stem grows vertically. The leaves are alternate, broadly heart-shaped, 4–9 cm long and 3–8 cm broad. Flowers, growing usually in Summer, are greenish-yellow, borne on a terminal spike 2–3 cm long with 4-6 large white basal bracts. 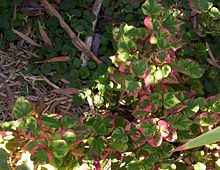 The plant grows well in moist to wet soil and even slightly submerged in water in partial or full sun. Plants can become invasive in gardens and difficult to eradicate. Propagation is via division.

In temperate gardens, it is usually in one of its cultivated forms, including: Chameleon (synonymous with H.c. 'Court Jester', H.c. 'Tricolour', H.c. 'Variegata') this variety is slightly less vigorous than the species and has leaves broadly edged in yellow and flecked with red; Flore Pleno has masses of white bracts and the vigour of the parent species.

Grown as a leaf vegetable, particularly in Vietnam, where it is called giấp cá or diếp cá and is used as a fresh herbal garnish. The leaf has an unusual taste that is often described as fishy (earning it the nickname "fish mint"), so it is not enjoyed as universally as basil, mint, or other more commonly used herbs.

In the southwestern Chinese provinces of Yunnan, Guizhou, and Sichuan, roots are used as a root vegetable. English names include heartleaf, lizardtail, and fishwort.

Houttuynia cordata is also used in used in folk medicine for diuresis and detoxification and herbal medicine for its antiviral, antibacterial and antileukemic activities.[2][not in citation given] Recently it has been suggested that it might have anti-obesity properties.[3] Houttuynia cordata was used by Chinese scientists to tackle SARS as it is conventionally used to treat pneumonia.[4]

Vap Ca is a very popular tonic herb in Japan and is used as a tonic tea, but also for chronic earache.[citation needed] The beverage dokudami cha (Japanese: ドクダミ茶; literally "Houttuynia cordata tea") is an infusion made from the leaves, Oolong tea leaves, and Job's Tears.[6][dead link]

It is used in traditional Chinese medicine and can cause severe allergic reactions.[7]

Chemical compounds that contribute to the aroma of Houttuynia cordata include β-myrcene[8][9] and 2-undecanone.[10]

Heartleaf or Lizard Tail is an alien invasive species in many areas in the United States and Australia.[11] Even the less vigorous forms will spread beyond an apt gardener's control if planted in any moderately moist soil.