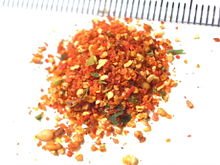 A typical blend may contain:

A jar of commercially produced shichimi

Some recipes may substitute or supplement these with poppy seed, yuzu peel, rape seed or shiso.

Shichimi should be distinguished from ichimi tōgarashi (一味唐辛子), which is simply ground red chili pepper, and means literally "one flavor chili pepper" (ichi meaning "one").

It dates back at least to the 17th century, when it was produced by herb dealers in Edo,[2] current day Tokyo, and sometimes it is referred to as Yagenbori (Japanese: 薬研堀, from the name of the original place of production). Most shichimi sold today come from one of three kinds, sold near temples: Yagenbori (やげん堀?) sold near Sensō-ji, Shichimiya (七味家?) sold near Kiyomizu-dera, and Yawataya Isogorō (八幡屋磯五郎?) sold near Zenkō-ji.

It is often used in soups and on noodles and gyūdon. Some rice products such as rice cakes, agemochi and roasted rice crackers also use it for seasoning.