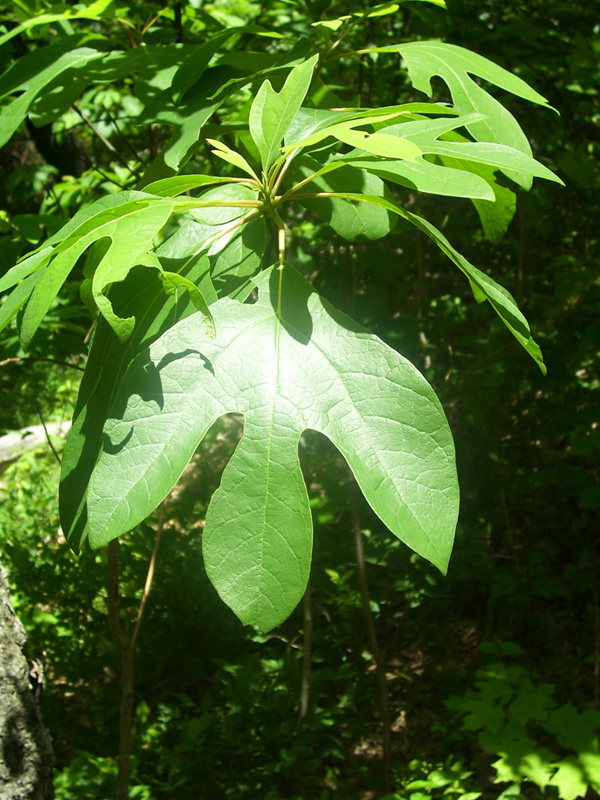 "Sassafras" is a genus of three species of s in the family , native to eastern and eastern .

Sassafras trees grow from 15–35 m (50–120 feet) tall and 70–150 cm (2.5–6 feet) in diameter, with many slender branches, and smooth, orange-brown bark. The branching is . The bark of the mature trunk is thick, red-brown, and deeply furrowed. The wood is light, soft, weak, and brittle. All parts of the plants are very fragrant. The species are unusual in having three distinct patterns on the same plant, unlobed oval, bilobed (mitten-shaped), and trilobed (three pronged; rarely the leaves can be five-lobed).

The name "Sassafras," applied by the botanist in the sixteenth century, is said to be a corruption of the Spanish word for .

*"" (Nuttall) Nees - Sassafras, White Sassafras, Red Sassafras or Silky Sassafras. Eastern North America, from southernmost , through the eastern south to central , and west to southern and eastern .
*"" (Hemsl.) Hemsl. - Chinese Sassafras or Tzumu. Central and southwestern . It differs from "S. albidum" in the leaves being more frequently three-lobed,

Steam distillation of dried root bark produces an consisting mostly of that once was extensively used as a in s and s, food and for . The yield of this oil from American sassafras is quite low and great effort is needed to produce useful amounts of the root bark. Commercial "sassafras oil" generally is a by-product of camphor production in Asia or comes from related trees in Brazil. Safrole is a precursor for the clandestine manufacture of the drug ecstasy, and as such, its transport is monitored internationally.

Importance to Livestock and Wildlife

For most of the above mentioned animals, sassafras is not consumed inlarge enough quantities to be important. Carey and Gill rate itsvalue to wildlife as fair, their lowest rating.

The dried and ground leaves are used to make , a spice used in the making of some types of .

The roots of Sassafras can be steeped to make tea and were used in the flavoring of until being banned by the U. S. Food and Drug Administration (FDA). Laboratory animals that were given oral doses of sassafras tea or sassafras oil that contained safrole developed permanent liver damage or various types of cancer. In humans, liver damage can take years to develop and it may not have obvious signs.

In 1960, the FDA banned the use of sassafras oil and safrole in foods and drugs based on the animal studies and human case reports. Several years later, the sale of sassafras oil, roots, or tea for human consumption was prohibited by lawFact|date=August 2008. Subsequently, both Canada and the United States have passed laws against the sale of any consumable products (beverages, foods, cosmetics, health products such as toothpaste, and others) that contain more than specific small amounts of . [ [http://www.drugdigest.org/DD/PrintablePages/herbMonograph/0,11475,552413,00.html EDrug Digest] .]

Sassafras tea can also be used as blood thinner.

* , The trees in this Southern Hemisphere family are known by the same common name.