Megson was born in Victoria Park, Longsight, Manchester. His parents were involved in theatre and music. His father, Ron, was a jazz musician who liked bebop and Nat King Cole. A photograph of Neil, age five, appears on the cover of the album A Hollow Cost.

In his teens he attended Solihull School. He became interested in the occult; his grandmother was a medium.[2] The Megson family lived at the edge of Epping Forest, in Loughton, Essex.

In 1968, while attending Hull University, he used the name Genesis P-Orridge for his first pressed recording, Early Worm[3] He used the attic of his family's home in Solihull as the recording studio, and only one copy was pressed by Deroy Sound.[4] The cover of Early Worm features handwritten quotes by John Cage from his book Silence: Lectures and Writings. In 2008, Dais Records released Thee Early Worm in a limited pressing of 500 copies.

P-Orridge legally changed his name in 1971. The follow-up to this album of improvisation on homemade instruments, Catching the Bird, was not released.

In 1971, P-Orridge met William S. Burroughs after a brief correspondence, and Burroughs later introduced P-Orridge to Brion Gysin.[5] Gysin would become a major influence upon P-Orridge's ideas and works and was his primary tutor in magic.[6]

P-Orridge dropped out of the University of Hull in 1969 and joined Exploding Galaxy, a commune in London's Islington Park Street. Members abandoned all normal modes of living, all notions of privacy, and Britain's class structure. Discipline was expected and costumes were the norm, as was role-playing and a rejection of all forms of social convention.[7]

Their Prostitution show, in 1976 at the Institute of Contemporary Arts (ICA) in London included on display Tutti's pornographic images from magazines as well as erotic nude photographs. The show featured a stripper, used Tampax in glass, and transvestite guards. Prostitutes, punks, and people in costumes were among those hired to mingle with the gallery audience. The show caused debate in Parliament about the public funding of such events. In the House of Commons, Scottish Conservative MP Sir Nicholas Fairbairn demanded an explanation from Arts Minister Harold Lever and proclaimed P-Orridge and Tutti as "wreckers of civilisation".[10] Fleet Street was not slow to pick up the story. The reviews were cut up, framed and put on display for the remainder of the exhibition. This was also reported in newspapers, so cut-ups about the cut-ups were also put on display.[citation needed]

Toward the end of COUM, performances would often consist of only P-Orridge, Cosey and Sleazy, the core group who went on to form Throbbing Gristle.

Throbbing Gristle was formed on 3 September 1975 at the ICA as a four-piece rock band, the fourth member being Chris Carter, who joined shortly before their debut.

The first Throbbing Gristle performance was at the Air Gallery in London on 6 July 1976. The band performed in one room with the music "appearing" in an adjacent room. Peter worked in special effects and provided the performers with simulated scars; meanwhile, Chris actually used a razor to slash himself.

At that point Throbbing Gristle headquarters was 10 Martello Street, Hackney, East London, an address of an artist collective. P-Orridge and Tutti's living and work space was the mailing address of Industrial Records. The final Throbbing Gristle single was "Discipline".

The final IR release was called Nothing Here but the Recordings, a best-of album taken from the archives of William S. Burroughs, who had allowed P-Orridge and Sleazy access to his reel-to-reel tape archive.

The final TG event, Mission of Dead Souls, was in May 1981 in San Francisco. Soon after, Genesis and Paula P-Orridge (née Alaura O'Dell) were married in Tijuana. 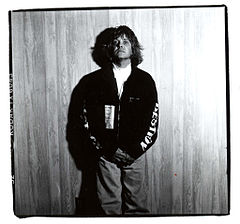 Psychic TV was formed in 1981, after Alex Fergusson of Alternative TV had encouraged P-Orridge to start something new. The musical collaboration between the two goes back to the very first ATV line-up, which included Genesis as drummer. According to the official P-Orridge and Voiceprint websites, the name was Fergusson's idea, with the "psychic" part representing P-Orridge and the "TV" part representing Fergusson. "Just Drifting" was the first PTV song, based on a poem by P-Orridge.[12]

Psychic TV made its debut in 1982 at an event organised by P-Orridge, David Dawson, and Roger Ely, called The Final Academy. It was a 4-day multimedia celebratory rally held in Manchester and at the Ritzy Cinema in Brixton, South London. It brought performers and audience together with literature, performance, film and music. PTV, Cabaret Voltaire, 23 Skidoo, Z'EV, John Giorno, William S. Burroughs, Brion Gysin, Terry Wilson, Jeff Nuttall, and The Last Few Days participated to honour the cut-up techniques and theories of William S. Burroughs, Ian Sommerville, Anthony Balch and Gysin. Video projection and early sampling were used here, as well as whispered utterances by P-Orridge reprocessed as a soundtrack to Gysin's Dreammachine by the Hafler Trio.

Force the Hand of Chance, Dreams Less Sweet, Allegory and Self, and Trip/Reset are considered by P-Orridge, in an interview with Sonic Envelope, to be the fully realized PTV albums – "metaphorical and very, very considered and carefully constructed meticulous albums."

Earning an entry into the Guinness Book of World Records for most records released in a year by a musical group, Psychic TV set about, in the mid-eighties, to release 23 live albums on the 23rd of each month for 23 months in recognition of the 23 enigma. In the event only 17 albums were released. The liner notes to each of these releases functioned somewhat like mini-manifestos in the tradition of the Situationist International or William S. Burroughs' Electronic Revolution in addition to recounting aspects of the recordings contained therein. For example, the fourth album in this series, Live In Reykjavík, featuring part of a ritual from Godhi Sveinbjörn Beinteinsson includes liner notes that refer to Christianity as "sham X-tianity," in reclamation of a Pagan heritage via an Ásatrú marriage, over which Beinteinsson presided, below a statue of Thor in "the wilderness".

Psychic TV returned to the stage in 2003, with a concert in New York under the guise of PTV3 and was accompanied by (with the exception of Genesis) an all new line-up. In September 2004, an extensive tour of Europe (covering 16 countries) and North America was launched. 2005 saw the band return to the studio, recording their first album in over 10 years (Genesis also spent 2005 working with Throbbing Gristle on what would be their first album in over 25 years).

In January 2006, the new PTV album was announced on P-Orridge's website. Hell is Invisible... Heaven is Her/e was recorded in NYC and features Nick Zinner (Yeah Yeah Yeahs) and Gibby Haynes (Butthole Surfers) guesting on some tracks. Genesis describes it as "The Dark Side of the Moon for the 21st century". To inaugurate the release of Hell is Invisible... Heaven is Her/e, PTV3 hosted a five night residency in September 2006 at Galapagos Art Space in Williamsburg, Brooklyn, New York. On 17 August a new album was announced, "Mr. Alien Brain Vs. The Skinwalkers" will be released by Cargo/Sweet Nothing Records on 20 October 2008.

Genesis and his second wife Lady Jaye, née Jacqueline Breyer, relocated to Brooklyn.[13] There, they began an ongoing experiment in body modification aimed at creating one pandrogynous being named Breyer P-Orridge.[14] They received breast implants and adopted gender neutral and alternating pronouns.[15] A book of Breyer P-Orridge's writings, poems, and observations, called Ooh, You Are Awful... But I Like You!, was published in Nepal[citation needed].

In 1999, Breyer P-Orridge performed with the briefly reunited late-1980s' version of Psychic TV for an event at London's Royal Festival Hall, called Time's Up. This is also the title of the first CD by Thee Majesty, Breyer P-Orridge's spoken-word project with noise guitarist Bryin Dall. The MC for the event, via pre-recorded video, was Quentin Crisp. A DVD was made of this event, which included the Master Musicians of Jajouka, Question Mark & the Mysterians, Billy Childish, and Thee Headcoats.

The aforementioned Thee Majesty CD Time's Up was released by The Order of the Suffering Clown via World Serpent Distribution. Jaqueline Megson is credited as providing Point Of View, Bryin Dall for Frequency Of Truth, and Genesis as Divination Of Word.

In December 2003, Breyer P-Orridge, using the alias Djinn, unveiled PTV3, a new act drawing upon the early "Hyperdelic" work of Psychic TV with media theorist Douglas Rushkoff among its members.[18] On 16 May 2004 all four former members of Throbbing Gristle performed at the London Astoria for the first time in 23 years.

Breyer P-Orridge appears in the 1998 film and 2000 book versions of Modulations, in the 1999 film Better Living Through Circuitry, in the 2004 film DiG!, the 2006 documentary Monks: The Transatlantic Feedback, in Nik Sheehan's 2007 feature documentary on the Dreamachine entitled 'FLicKeR', and the 2010 documentary "William S. Burroughs: A Man Within."

"Genesis Breyer P-Orridge and her reactivated Psychic TV aka PTV3 are terribly sad to announce the cancellation of their November North American tour dates. This decision is entirely due to the unexpected passing of band member Lady Jaye Breyer P-Orridge. Lady Jaye died suddenly on Tuesday 9 October 2007 at home in Brooklyn, New York from a previously undiagnosed heart condition which is thought to have been connected with her long-term battle with stomach cancer. Lady Jaye collapsed and died in the arms of her heartbroken "other half" Genesis Breyer P-Orridge."[20]

Psychic TV's current incarnation, PTV3, released a CD/DVD set, Mr. Alien Brain vs. The Skinwalkers on 9 December 2008. The album was the first full-length release since the death of Breyer P-Orridge's "other half". The two had previously embarked on a years-long pursuit of pandrogyny, undergoing a series of plastic surgery procedures in order to become gender-neutral human beings that looked like each other.[21]

We started out, because we were so crazy in love, just wanting to eat each other up, to become each other and become one. And as we did that, we started to see that it was affecting us in ways that we didn't expect. Really, we were just two parts of one whole; the pandrogyne was the whole and we were each other's other half.[22]

On 4 November 2009 it was announced that Breyer P-Orridge would retire from touring in any and all bands (including Throbbing Gristle and Psychic TV) to concentrate on art, writing and music.[23]

"I'm 38 and for all my faults I have spent most of those 38 years searching determinedly for ideas that work and ideas that help. Not everyone maybe, but some people. If they work and if they make any kind of sense, the only way to check is to give them to other people and see if it works. If it helps one or two or ten or fifteen, that's a massive improvement on what most human beings do in their life to help anyone. If it helps a few hundred or a few thousand, that's incredible"

In describing his theological beliefs, P-Orridge has commented that "I don't believe in any gods. I believe that gods are early attempts at psychology, trying to understand the light and dark side of human nature. The deeper part of human nature where you go right inside yourself, beyond dreams and into those recesses which we should look into, but we're out of practice [in doing that] in our culture."[25]

P-Orridge has openly criticised contemporary Christianity, describing it as "an incredibly sick social pseudo-religion", and arguing that it was based upon the tenet of "Be good now, agree, or else we will punish you forever and ever when you're dead. And we may punish you while you're alive…". He maintains that such an attitude was established in Christianity by St. Paul and the early Roman Catholic Church, and that it differed from the "ecstatic mysticism of the original Christianity, the Gnostic Christianity."[26]