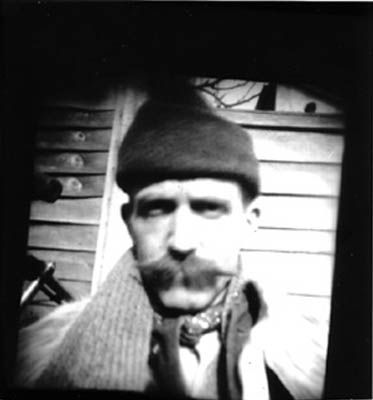 Billy Childish (real name Steven John Hamper) or William Charlie Hamper (born , ) is an English artist, author, , photographer, film maker, singer and guitarist. He is known for his explicit and prolific work: he has detailed his love life and childhood sexual abuse, notably in his early poetry and the novels "My Fault" and "Sex Crimes of the Futcher".

He has published more than 40 collections of poetry, written four novels, recorded more than 100 full-length independent LPs of punk, rock'n'roll, and Medway-delta blues and produced more than 2,500 paintings. He is a consistent advocate for amateurism and free emotional expression and was a co-founder of the art group in 1999. Since leaving the Stuckist group in 2001 a new evaluation of Childish's standing in the art world has been underway, culminating with the publication of a critical study of Childish's working practice by the artist and writer Neal Brown, with an introduction by , which describes Childish as "one of the most outstanding, and often misunderstood, figures on the British art scene." [ "Billy Childish a Short Study" by Neal Brown published by The Aquarium, ISBN 1871894233]

Billy Childish was born and lives in Chatham, , . He was sexually abused when he was aged nine by a male family friend: "We were on holiday. I had to share a bed with him. It happened for several nights, then I refused to go near him. I didn't tell anyone." [http://www.timesonline.co.uk/article/0,,22876-2475809.html] He left secondary school at 16, an undiagnosed dyslexic. Refused an interview at the local art college, he entered , Kent, as an apprentice stonemason. During the next six months (the artist’s only prolonged period of employment), he produced some 600 drawings in "the tea huts of hell". On the basis of this work he was accepted into St Martin’s School of Art, where he was friends with the artist , to study painting. However, his acceptance was short-lived and before completing the course he was expelled in 1982. He then lived on for 15 years. In 2006 Childish turned down the offer to appear on Channel 4's .

Childish paints in a personal style, which parallels his passion for the elemental in both writing and music. Since 2002 Childish has been represented by The Aquarium L-13 Gallary in London, (along with and (with who he has sometimes collaborated). He has also shown with Kent gallery Castlearts, Canterbury.

In 1979, Childish was a founder member of , a poetry performance group, who read at the Kent Literature Festival and the 1981 Cambridge International Poetry Festival. There were, however, personality clashes in the group, particularly between Childish and Charles Thomson, who said: "There was friction between us, especially when he started heckling my poetry reading and I threatened to ban him from a forthcoming TV documentary." [ [http://www.3ammagazine.com/artarchives/2002_dec/interview_charles_thomson.html Interview with Charles Thomson on 3ammagazine.com] ] However, a TV South documentary on the group in 1982 brought them to a wider regional audience.According to Childish: "Me & Charles were at war from 1979 until 1999. He even threatened having bouncers on the doors of Medway Poets' readings to keep me out." [ [http://www.trakmarx.com/2004_02/10_billy.htm "Billy Childish on Stuckism", trakmarx.com] Accessed , ]

During the 1980s, Childish was a major influence on the artist , whom he met in 1982, after his expulsion from the Painting department at . Tracey was a fashion student at Medway College of Design. Emin and Childish were a couple until 1986-7, Emin selling his poetry books for his small press . In 1995 she was interviewed in the "Minky Manky" show catalogue by , who asked her, "Which person do you think has had the greatest influence on your life?" She replied::Uhmm... It's not a person really. It was more a time, going to Maidstone College of Art, hanging around with Billy Childish, living by the River Medway.

Her famous "tent" "" (1995) was first exhibited in the show, and Childish's name was displayed prominently in it. The tent was destroyed in a fire at the warehouse, in Leyton, east London, in 2004.

Childish has said "My relationship with Tracey Emin finished in 1987 – 21 years ago, to be exact. Whilst I like and respect Tracey, and wish her well, the relationship is not significant in respect of my current life, and therefore I choose not to discuss it." [ [http://www.theaquariumonline.co.uk/acatalog/copy_of_Billy_Childish_profile.html THE AQUARIUM L-13 Artist profile ] ]

In 1999 Childish and Thomson co-founded the Stuckist . Thomson coined the group name from Childish's "Poem for a Pissed Off Wife" ("Big Hart and Balls" 1994), where he had recorded Emin's remark to him::Your paintings are stuck, you are stuck! — Stuck! Stuck! Stuck!"The group was strongly pro-figurative painting and anti-conceptual art. Childish wrote a number of manifestos with Thomson, the first of which contained the statement::Artists who don't paint aren't artists.The Stuckists soon achieved considerable press coverage, fuelled by Emin's nomination for the . They then announced the inauguration of a cultural period of to bring back spiritual values into art, culture and society. The formation of The Stuckists directly led to Emin severing her 14-year friendship with Childish in 1999.

Childish has said "The Stuckist art group was formed in 1999 at the instigation of Charles Thomson, the title of the group being taken from a poem of mine written and published in 1994. I disagreed with the way Charles presented the group, particularly in the media. For these reasons I left the Stuckists in 2001. I never attended any Stuckist demonstrations and my work was not shown in the large Stuckist exhibition held in the Walker Art Gallery in 2004." [ [http://www.theaquariumonline.co.uk/acatalog/copy_of_Billy_Childish_profile.html THE AQUARIUM L-13 Artist profile ] ]

As a young man, Childish was highly influenced by Dada, and the work of in particular. Childish has a Kurt Schwitters poem tatooed on his left buttock and made a short film on Schwitters' life, titled The Man with Wheels, (1980, directed by Eugean Doyan). [ Billy Childish a Short Study" by Neal Brown published by The Aquarium ISBN 1871894233] In his poetry, Childish mentions that he once had a bank account under the name of Kurt Schwitters.As to what is now termed conceptual art, Childish has said "I respect the right of detractors and champions alike as we live in a democracy." [ [http://www.theaquariumonline.co.uk/acatalog/copy_of_Billy_Childish_profile.html THE AQUARIUM L-13 Artist profile ] ]

In 2002, along with Wolf Howard, Simon Williams and Julie Hamper, Childish formed The Chatham Super 8 Cinema. The group makes super 8 films on a 2nd hand camera Wolf Howard brought at a local flea market. In 2004 Childish released a 30 min doc titled Brass Monkey, about a march undertaken in period Great War uniform commemorating the 90th anniversary of the British retreat from Mon's in 1914.

His groups include TV21 AKA the Pop Rivets (1977-1980), sometimes spelled the Pop Rivits, with , , and . He later formed (1980-1984) with , (1985-1989), then (1989-1999). In 2000 he formed Wild Billy Childish & The Friends of the Buff Medways Fanciers Association (2000-2006), named after a type of poultry bred in his home town. The Buffs, as they were sometimes affectionately known, split in 2006, and Wild Billy Childish & the Musicians of the British Empire were born, recording a song about one of Billy's heroes titled "Bottomless Pit." In early 2007, Billy formed with former singer and guitarist and A-Lines guitarist and singer . Thee Headcoats began their monthly residency at the Wild Western Room in the St John's Tavern, north London in the early 1990s, and continued after moving to the Dirty Water Club in 1996. Billy's current group, the Musicians of the British Empire, play at the venue more or less once a month to this day.

Childish has been namechecked by a number of famous musicians including , ( had Billy's name written in large letters on his arm for an early "" appearance) and who named the LP "" after his book "Poems to Break the Harts of Impossible Princesses" (sic). [cite news | first = Frances | last = Whiting | authorlink = Frances Whiting | title = Princess Kylie on the Move | work = | publisher = Queensland Newspapers | location = | date = ]