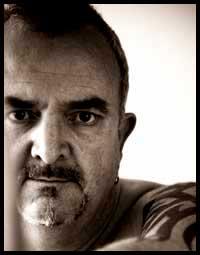 Peter Martin Christopherson, a.k.a. Sleazy (born , ) is a musician, video director and designer, and former member of the influential British design agency .

He was one of the original members of the infamous band, . After he participated in the foundation of along with Geoffrey Rushton, aka . After his short time in , Christopherson formed Coil along with Balance, which lasted just under 23 years, until Balance died of a fall in their home. Christopherson has participated in the reuniting of Throbbing Gristle as well as composed an album for his current solo endeavour .

Born in , Peter Christopherson was a founding member of who are credited with creating the genre before disbanding in 1981. Throbbing Gristle members Chris Carter and formed their own group while Peter Christopherson and TG's other member formed along with other musicians. met Christopherson as a Throbbing Gristle fan and the two became partners. Christopherson worked on the first two Psychic TV albums, "" and "", joined by Balance on the second one. The two performed live several times with then formed on their own project, Coil. Along with Chris Carter, Christopherson has personally documented on his MySpace blog (with photographic evidence) of having played a custom-made (for him) keyboard-triggered sampler before the first sampler () was available in UK. While not the first sampler, this was a major step towards the use of samplers in live performance, as noted by Christopherson himself.

Despite Christopherson's long and extensive history as a musical artist, he has only released a single track under the name Peter Christopherson. The song, "In My Head A Crystal Sphere Of Heavy Fluid", appeared on the compilation "Foxtrot", a benefit album for former partner John Balance's rehabilitation from alcohol addiction.

In 2005, Christopherson relocated from to , and undertook the project . Since Christopherson's relocation he has released the final Coil CDs; "", "", "", and reissued "" and "", which were formerly being manufactured in .

In 2007 Christopherson released the debut album of his solo effort The Threshold HouseBoys Choir. The album, "", is broken down into five "parts" or songs, and includes a DVD of the album set to video of Thai rituals in . He is guest and jury head of the 2007 . [http://muff.com.au/sleazy.htm]

olo as The Threshold HouseBoys Choir

With Coil, Sickness Of Snakes, ELpH, The Eskaton and Black Light District

This from Peter "Sleazy" Christopherson himself: "I worked as a free-lance photographer and contributor, then promoted to an assistant to before becoming a partner, and continued to act also after I officially left the organization. So my contributions range from attempted but rejected artwork or design work, to partial contribution in either/both as an assistant, to being fully responsible for all design and artwork, such as the LPs. What you wish to document is up to you."Fact|date=October 2007