Bebop or bop is a style of jazz characterized by fast tempo, instrumental virtuosity and improvisation based on the combination of harmonic structure and melody. It was developed in the early and mid-1940s. It first surfaced in musicians' argot some time during the first two years of American involvement in the Second World War. This style of jazz ultimately became synonymous with modern jazz, as either category reached a certain final maturity in the 1960s.

"In spite of the explanations of the origins of these words, players actually did sing the words 'bebop' and 'rebop' to an early bop phrase as shown in the following example."[1]

The word "bebop" is usually stated to be nonsense syllables (vocables) which were made in scat singing, and is supposed to have been first attested in 1928.[2] Some researchers speculate that it was a term used by Charlie Christian, because it sounded like something he hummed along with his playing.[3] Dizzy Gillespie tells that the audiences coined the name after hearing him scat the then-nameless tunes to his players and the press ultimately picked it up, using it as an official term: "People, when they'd wanna ask for those numbers and didn't know the name, would ask for bebop."[4]

However, possibly the most plausible theory is that it derives from the cry of "Arriba! Arriba!" used by Latin American bandleaders of the period to encourage their bands.[5] This squares with the fact that, originally, the terms "bebop" and "rebop" were used interchangeably. By 1945, the use of "bebop"/"rebop" as nonsense syllables was widespread in R&B music, for instance Lionel Hampton's "Hey! Ba-Ba-Re-Bop," and a few years later in rock and roll, for instance Gene Vincent's "Be-Bop-A-Lula" (1956).

The 1939 recording of "Body and Soul" by Coleman Hawkins is an important antecedent of bebop. Hawkins' willingness to stray—even briefly—from the ordinary resolution of musical themes and his playful jumps to double-time signaled a departure from existing jazz. The recording was popular; but more importantly, from a historical perspective, Hawkins became an inspiration to a younger generation of jazz musicians, most notably Charlie Parker, in Kansas City.

In the 1940s, the younger generation of jazz musicians forged a new style out of the swing music of the 1930s. Mavericks like Dizzy Gillespie, Charlie Parker, Bud Powell and Thelonious Monk were influenced by the preceding generation's adventurous soloists, such as pianists Art Tatum and Earl Hines, tenor saxophonists Coleman Hawkins and Lester Young and trumpeter Roy Eldridge. Gillespie and Parker, both out of the Earl Hines Band in Chicago had traveled with some of the pre-bop masters, including Jack Teagarden, Earl Hines and Jay McShann. While Gillespie was with Cab Calloway, he practiced with bassist Milt Hinton and developed some of the key harmonic and chordal innovations that would be the cornerstones of the new music; Charlie Parker did the same with bassist Gene Ramey while with McShann's group. These forerunners of the new music (which would later be termed "bebop," or "bop"-- although Parker himself never used that term, feeling it demeaned the music) began exploring advanced harmonies, complex syncopation, altered chords and chord substitutions. The bop musicians advanced these techniques with a more freewheeling, intricate and often arcane approach.

Minton's Playhouse in New York served as a workout room and experimental theater for early bebop players,[6] including Don Byas, Thelonious Monk and Charlie Christian, who had already hinted at the bop style in innovative solos with Benny Goodman's band.

Christian's major influence was in the realm of rhythmic phrasing. Christian commonly emphasized weak beats and off beats, and often ended his phrases on the second half of the fourth beat. Christian experimented with asymmetrical phrasing, which was to become a core element of the new bop style. Swing improvisation was commonly constructed in two or four bar phrases that corresponded to the harmonic cadences of the underlying song form. Bop improvisers would often deploy phrases over an odd number of bars, and overlap their phrases across bar lines and across major harmonic cadences. Christian and the other early boppers would also begin stating a harmony in their improvised line before it appeared in the song form being outlined by the rhythm section. This momentary dissonance creates a strong sense of forward motion in the improvisation. Swing improvisers commonly emphasized the first and third beats of a measure. But in a bebop composition such as Dizzy Gillespie's "Salt Peanuts," the rhythmic emphasis switches to the second and fourth beats of the measure. Such new rhythmic phrasing techniques give the typical bop solo a feeling of floating free over the underlying song form, rather than being tied into the song form.

This change increased the importance of the string bass. Now, the bass not only maintained the music's harmonic foundation, but also became responsible for establishing a metronomic rhythmic foundation by playing a "walking" bass line of four quarter notes to the bar. While small swing ensembles commonly functioned without a bassist, the new bop style required a bass in every small ensemble.

By 1950, a second wave of bebop musicians—such as Clifford Brown and Sonny Stitt—began to smooth out the rhythmic eccentricities of early bebop. Instead of using jagged phrasing to create rhythmic interest, as the early boppers had, these musicians constructed their improvised lines out of long strings of eighth notes, and simply accented certain notes in the line to create rhythmic variety.

Bebop differed drastically from the straightforward compositions of the swing era, and was instead characterized by fast tempos, asymmetrical phrasing, intricate melodies, and rhythm sections that expanded on their role as tempo-keepers. The music itself seemed jarringly different to the ears of the public, who were used to the bouncy, organized, danceable tunes of Benny Goodman and Glenn Miller during the swing era. Instead, bebop appeared to sound racing, nervous, and often fragmented. But to jazz musicians and jazz music lovers, bebop was an exciting and beautiful revolution in the art of jazz.

While swing music tended to feature orchestrated big band arrangements, bebop music highlighted improvisation. Typically, a theme (a "head," often the main melody of a pop or jazz standard of the swing era) would be presented together at the beginning and the end of each piece, with improvisational solos based on the chords of the tune. Thus, the majority of a song in bebop style would be improvisation, the only threads holding the work together being the underlying harmonies played by the rhythm section. Sometimes improvisation included references to the original melody or to other well-known melodic lines ("allusions," or "riffs"). Sometimes they were entirely original, spontaneous melodies from start to finish.

Chord progressions for bebop tunes were often taken directly from popular swing-era songs and reused with a new and more complex melody, forming new compositions. This practice was already well-established in earlier jazz, but came to be central to the bebop style. The style made use of several relatively common chord progressions, such as blues (at base, I-IV-V, but infused with II-V motion) and 'rhythm changes' (I-VI-II-V, the chords to the 1930s pop standard I Got Rhythm). Late bop also moved towards extended forms that represented a departure from pop and show tunes. 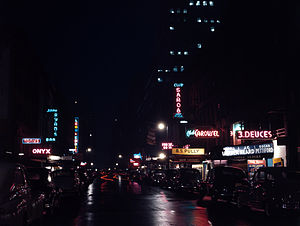 The classic bebop combo consisted of saxophone, trumpet, bass, drums, and piano. This was a format used (and popularized) by both Charlie Parker (alto sax) and Dizzy Gillespie (trumpet) in their 1940s groups and recordings, sometimes augmented by an extra saxophonist or guitar (electric or acoustic), occasionally adding other horns (often a trombone), or other strings (usually fiddle or violin) or dropping an instrument and leaving only a quartet.

Although only one part of a rich jazz tradition, bebop music continues to be played regularly throughout the world. Trends in improvisation since its era have changed from its harmonically-tethered style, but the capacity to improvise over a complex sequence of altered chords is a fundamental part of any jazz education.

By the mid-1950s musicians (Miles Davis and John Coltrane among others) began to explore directions beyond the standard bebop vocabulary. Simultaneously, other players expanded on the bold steps of bebop: "cool jazz" or "West Coast jazz", modal jazz, as well as free jazz and avant-garde forms of development from the likes of George Russell.

Bebop style also influenced the Beat Generation whose spoken-word style drew on jazz rhythms, and whose poets often employed jazz musicians to accompany them. The bebop influence also shows in rock and roll, which contains solos employing a form similar to bop solos, and "hippies" of the 60s and 70s, like the boppers had a unique, non-conformist style of dress, a vocabulary incoherent to outsiders, and a communion through music. Fans of bebop were not restricted to the United States; the music gained cult status in France and Japan.

More recently, Hip-hop artists (A Tribe Called Quest, Guru) have cited bebop as an influence on their rapping and rhythmic style. Bassist Ron Carter even collaborated with A Tribe Called Quest on 1991's The Low End Theory, and vibraphonist Roy Ayers and trumpeter Donald Byrd were featured on Jazzmatazz, by Guru, in the same year. Bebop samples, especially bass lines, ride cymbal swing clips, and horn and piano riffs are found throughout the hip-hop compendium.