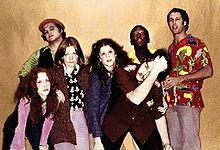 The following list of cast members includes both featured and repertory players, but omits SNL writers and others who weren't listed as cast members during the show's credits. The dates given are those of the years they were on the show. Also noted on the chart is whether the cast member ever served as an episode's host, appeared as the anchor of the "Weekend Update" segment (under any of its titles), or has been the subject of their own "Best Of" home video collection.

Some cast members are related to former staff of the show. The most prominent example is Jim Belushi, younger brother of cast member John Belushi. Before that, Bill Murray's older brother Brian Doyle-Murray was a writer and cast member. When Dan Aykroyd left the show in 1979, he was replaced by a series of short-lived featured players, one of whom was his brother Peter Aykroyd. 1980 featured player Matthew Laurance was the identical twin brother of 1977-1980 associate director and bit player Mitchell Laurance. Long-time writer and sometime performer Jim Downey is former cast member Robert Downey, Jr.'s uncle. Abby Elliott is the daughter of former cast member Chris Elliott (and granddaughter of Bob Elliott, who appeared on SNL as a guest performer on the 1978 Christmas episode hosted by Elliot Gould).

Other family connections exist that do not share the same name. For instance, cast member Gilda Radner was briefly married to G. E. Smith, who later became the show's bandleader. Michael O'Donoghue was married to SNL band pianist Cheryl Hardwick. Cast members Julia Louis-Dreyfus and Brad Hall were an item during their tenure, and were married in 1987. Cast member and writer Tina Fey is married to musical director Jeff Richmond.

The following is a list of the cast members with the longest tenures, who have spent eight seasons or more with the show.

The following is a list of the cast members who have had the shortest tenures on the show. [1]

The following is a list of the oldest people to join the show.

President of the United States impression

Impersonating the President of the United States is considered "about as high of an honor that can be bestowed upon a cast member."[3] The following is a list of people who have impersonated the president.

Although SNL is well-known as the launchpad for many successful careers, seven cast and active crew members have died prematurely. This has given rise to a superstition known as the "Saturday Night Live Curse".[4][5][6]

Two cast members have died of a drug overdose at the age of 33, in parallel situations. John Belushi and Chris Farley overdosed from a "speedball," an injection of cocaine and heroin. Belushi's death led to the conviction of Cathy Smith for administering the fatal injection. Nearly four years before Belushi's death, SNL aired a short sketch titled Don't Look Back In Anger featuring an elderly Belushi as the last living of the "not ready for prime time" cast members. Farley's death occurred nearly two months after he came back to host SNL, which turned out to be his final television appearance.

Yep, they all thought I'd be the first to go. I was one of those live-fast, die-young, leave-a-good-looking-corpse types, you know?
—John Belushi

Original cast member Gilda Radner died on May 20, 1989 from ovarian cancer. She was originally scheduled to host the thirteenth season finale, a first for a former female cast member, but the show was canceled due to a Writer's Guild of America strike. Her health worsened the following year. Shortly before the fourteenth season finale, news came of Radner's death, and Steve Martin delivered his visibly shaken monologue, followed by the sketch called "Dancing in the Dark" that he and Radner performed on an episode he hosted in 1978, and a musical tribute to Radner performed by her former husband G. E. Smith and the SNL Band.

Long-time performer Phil Hartman was killed on May 28, 1998 by his wife while he slept in his Encino, California home. Before committing the act, Brynn consumed a combination of cocaine, alcohol, and the antidepressant drug Zoloft, and later shot herself.

Doumanian-era performer Charles Rocket was found dead on October 7, 2005 in his Canterbury, Connecticut backyard. Local police declared his death a suicide; he had allegedly taken his own life by cutting his neck with a box-cutter.

Julia Sweeney was diagnosed with cervical cancer in the mid-1990s, but has survived and transformed her experiences into a one-woman show, God Said, Ha!, developed at LA's alternative comedy show, "Un-Cabaret". Miramax released the film version of the show in 1998, produced by Quentin Tarantino. The film version of the play earned the Golden Space Needle Award, while Sweeney's recording earned her a Grammy nomination for best comedy album. It was released on DVD in 2003.