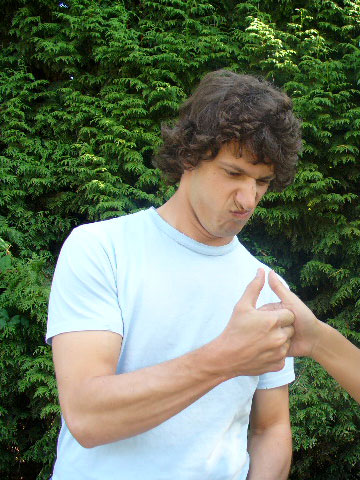 Samberg was born in , the son of Marjorie (née Marrow), an elementary school teacher, and a father.

The Lonely Island (which also includes and ) has a popular website where sketches and music are available for download. Samberg played the role of Jesse Miller in "" "The 'Bu", the group's popular contribution to . They also made a pilot for FOX called "Awesometown" and have written for various award shows, most notably the 2004 and 2005 MTV Movie Awards.

On September 13, 2005, the Lonely Island website confirmed that Samberg would be joining "" as a featured player, while Schaffer and Taccone would join the show's writing staff. While his live sketch roles were limited in his first year, he has appeared in many non-live sketches, including commercial parodies and various other filmed segments. For the December 17, 2005 show, he and starred in the Digital Short "," a rap performed by two white ites on a quest to see "" film. The short quickly became an Internet phenomenon and garnered Samberg significant media and public attention, as did "," a duet with that won a Creative Arts Emmy for Outstanding Original Music and Lyrics. [http://www.emmys.org/downloads/2007/59ptemmys_noms.pdf]

Samberg was promoted to repertory status at the beginning of "SNL"'s 32nd season (September 30, 2006).

Samberg most recently starred as Rod Kimble in "Hot Rod" (2007). He provides a voice for the animated film "" and has a small cameo as a homeless person in . He will also co-star in the 2009 comedy "", and voice a main character in the big-screen adaptation of "" set for release in 2010.

Samberg appeared in a Pepsi commercial featuring . He played a transvestite wearing a blonde wig in the window as Timberlake is being dragged up the side of the building. [ [http://defamer.com/351365/pepsi-pays-justin-timberlake-rumored-2-million-to-undergo-painful-sterlization-during-super-bowl defamer.com] ]