The Babeș-Bolyai University (UBB—Universitatea Babeș-Bolyai, Hungarian: Babeș-Bolyai Tudományegyetem) in Cluj-Napoca is an university in Romania. With almost 50,000 students, the university offers 105 specialisations, of which there are 105 in Romanian, 67 in Hungarian, 17 in German, and 5 in English. The university was named after prominent scientists from Transylvania, Romanian bacteriology scientist Victor Babeș and the Hungarian mathematician János Bolyai.

On May 12, 1919, after the Union of Transylvania with Romania, the Romanian University of Cluj was set up. King Ferdinand proclaimed the university open on February 1, 1920, while its Hungarian section moved to Szeged.

In 1959 communist authorities decided to merge the two universities, the "Babeș" University and the "Bolyai" University under the "Babeș-Bolyai" University name, with Romanian and Hungarian teaching languages. This operation, which deeply undermined the interests of the Hungarian community in Transylvania and led to the suicide of a Hungarian pro-rector[6] and a professor,[7] was orchestrated[citation needed] by Nicolae Ceauşescu, the former Romanian dictator, and Ion Iliescu, his successor as president. Later on, under the communist regime, the studies in Hungarian were gradually reduced.

After the Romanian Revolution of 1989 in which ethnic Hungarians had a major role, the Hungarian language education was expanded by increasing the number of specializations in Hungarian. Also specializations taught in German and English have been introduced.

The university is now the most diversified (in terms of specializations) and the most complex higher education institution in Romania.[citation needed] 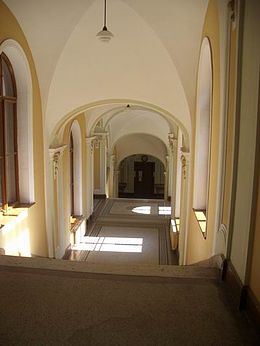 Babeș-Bolyai University - inside the main building

The university has 21 faculties and over 1,700 faculty members. The University offers bachelor's, master's, and Ph.D. degrees, along with advanced postgraduate studies.

Babeș-Bolyai University has more than 45,000 students. The structure of the student body is composed out of 3,000 Ph.D. students, 500 international students, 4,300 secondary education teachers, and 38,000 undergraduate. Here is the list of the faculties, along with the languages in which their courses are taught—(RO-Romanian, HU-Hungarian, DE-German,FR-French, EN-English).

The status of Hungarian "part" of the university

The Hungarian academic community at the University has a partial autonomy that was gradually increased in the last several years[citation needed]. However, in the opinion of the Council of the Hungarian section, those members are appointed by the Hungarian speaking teaching staff desires a granted, a more institutionalized form of decision making, taking into consideration the a long university tradition of the Hungarian community and generalized demands of Hungarians in Romania for cultural and educational autonomy. Decision-making is based on majority vote, therefore Hungarian representatives in minority can always be silenced by this procedure. Hungarian Language is used in academical communication, as a teaching language, but also used in public relations, tutorials, in some written posters and communications, but the legends, inscriptions, classroom labels are only in Romanian, so the image and the feeling is not of a real multilingual university. In Hungarian section are enrolled near 7200 students in 67 BA programmes, so the university is the most important institution that educate members of Hungarian minority in Transylvania. Establishment of Hungarian faculties was impeded several times, albeit asked by more than 80% of the Hungarian professors. Last time, on 22 February 2006, the University Senate neglected the demand of 149 Hungarian professors. Moreover, there are no Hungarian inscriptions, the Hungarian language cannot be used as a language of formal communication within the University.

In November 2006, dr. Péter HANTZ and dr. Lehel KOVÁCS, both lecturers at the Babeș-Bolyai University, were sacked by the university after a series of actions taken for, what they call, the language equality, started in October 2005. They were campaigning for the re-establishment of the Bolyai University by splitting the Babes-Bolyai University in two independent institutions, in spite of the threats of the Universitry management.[citation needed]

On 22 November 2006, the University organized an exhibition in the European Parliament, where they tried to give the impression that there are multilingual signs at the University. In the same day, dr. Péter Hantz put up signs like "Information" and "No smoking" in Hungarian alongside those ones in Romanian.[8] Hantz and Kovács acted upon a decree permitting the use of multilingual signs, which had been decreed by the university but never put in practice, and official claims that the university is a multicultural institution with three working languages (Romanian, German and Hungarian).[9] On 27 November 2006, the Senate voted for exclusion of the two lecturers, with 72 for and 9 against (from 2 Romanian and 7 Hungarian members) votes. The Hungarian academic community is convinced that the exclusion was not a disciplinary action, but the vote was not ethnic based.In spite of various protests, the resignation out of solidarity by several Hungarian-speaking university staff, and a call by 24 Hungarian MEPs for the reinstatement of the lecturers in the weeks after the incident, the lecturers remained unemployed.[8] The parties in the Hungarian Parliament asked the university to reinstate the two professors and respect the rights of the Hungarian minority. The presidents of the five parties represented in the Hungarian parliament signed a statement that read as follows:[9]

"The expulsion of the two young educators tells Hungary's parliamentary representatives that there are still people in Romania who believe that in the 21st century the desires for democratic higher education of a 1.5-million-strong community can be denied."

Istvan Hiller, Education Minister of Hungary, also wrote to his Romanian counterpart Mihail Hărdău, asking for his help on the issue.[9] The case has also been put forward in the Parliamentary Assembly of the Council of Europe. Göran Lindblad, from the Swedish European People’s Party, along with 24 signatories from 19 European countries, presented a motion for a resolution on the alleged breaching of the 1994 Framework Convention for the Protection of National Minorities by the Romanian Government.[10]