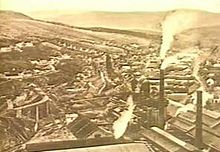 View of the Reșița's local factory in the early 20th century

The name of Reşiţa, might comes from the Latin recitia, meaning "cold spring", as the great historian Nicolae Iorga once suggested, presuming that the Romans gave this name to Resita, from a water spring on the Doman valley. A much more plausibile version, according to Iorgu Iordan, would be that the name is actually coming from a Slavic word: people living in the neighbour village of Caraşova 15 km away, referring to this place, that in those days was a similar village to theirs, as being „u rečice” (at the creek). It can also be noted that almost all Slavic countries have places with the name of Rečice (pronounced Reciţe in Romanian). [1]

Historically, the town has its origins in the 15th century under the name of Rechyoka and Rechycha. Archaeological research found traces of habitation going back to the Neolithic, Dacian and Roman eras. It was mentioned in 1673 under the name of Reszinitza, whose citizens paid taxes to Timişoara, and by the years 1690–1700, it was mentioned as being part of the District of Bocşa together with other towns in the Bârzava Valley. The town was referenced to in the conscription acts of 1717 under the name of Retziza. On 3 July 1771, it became an important metal-manufacturing center in the region. The foundation of the industrial Reșița were laid with the establishment of factories near the villages of Reşiţa Română (Reschiza Kamerală or Olah Resitza) and Reșița Montană (Eisenwerk Reschitza, Nemet Reschitza or Resiczbanya). Reşiţa Montană was at first inhabited by Romanians, and later, in 1776, 70 German families settled there. Between the years 1910–1925, Reşiţa had the status of a rural area, and in 1925, it was declared a town thanks to its development to a powerful industrial location in modern Romania. In 1968, it became a municipality.

After 1989 Reșița lost most of its importance and its economy faced a drawback, along with the Romanian economy. The population also suffered a decrease, dropping from 110,000 in 1989 to 86,000 in 2006. After the fall of communism, the Reșița Steelworks (Combinatul Siderurgic Reşiţa, CSR) were bought by an American investor who brought the factory just one step away from bankruptcy. Today the steelworks are run by TMK Europe GmbH, a German subsidiary of the OAO TMK, Moscow, who has projects of modernization for the CSR. Still, it is believed that CSR would never reach again the status it had in the communist era.

According to the last census, from 2002, there were 84,026 people living within the city of Reșița,[2] making it the 29th largest city in Romania. The ethnic makeup is as follows:

An important iron and steel center, Reșița is the site of blast furnaces, iron foundries, and plants producing electrical appliances, chemicals and machinery. 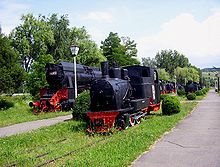 A locomotive museum featuring Romania's first locomotives is located in Reşiţa, in the Triaj neighborhood.

There are also important cultural points in Reşiţa that have been renewed in 2006, including the Şcoala de Beton (School of Concrete), Centrul Civic (Downtown) and Sala Polivalentă (Polyvalent Gym).

The Centrul Civic has been mostly renovated in 2006, but it is not yet finished, even though most of it is free of restrions. Another important point to view in Reşiţa is its famous fountain located in the Centrul Civic witch has been built in the communist era and it is one of Europe's most beautiful fountains, which can even change the water's shape in the air. Unfortunately it is not always on because it consumes a large amount of electricity.

Also, the city is a hub for leisure locations all around. Locations near Reșița include the ski resort at Semenic, Lake Gozna, Lake Secu, the Trei Ape Lake (Three Rivers Lake), Gărâna, Brebu, and Văliug. 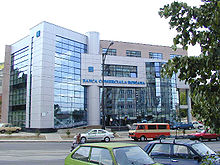 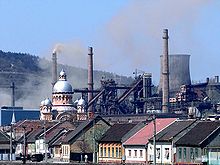 Old view of a small part of the Reşiţa Steelworks, typically sitting between the hills and civil constructions: houses and the old Orthodox Cathedral

Reşiţa has long been considered as the second largest industrial center of Romania. It has a population of about 86,000 inhabitants (2006). It is an important center in manufacturing steel and vehicle manufacturing. C.S.R. (Combinatul Siderurgic Reşiţa) and U.C.M.R. (Uzina Constructoare de Maşini Reşiţa) are the factories which sustained the city's life for more than 300 years. The first factories were built in 1771, during the reign of Maria Theresa. During the 19th century, the steel works were known as StEG. After the end of World War I, when Banat became part of Romania, they changed their name again, this time to Uzinele şi Domeniile Reșița or UDR (Reşiţa Works and Domains). Only later, under the Communist regime, did the UDR split to CSR and UCMR.

The economy of Reşiţa has faced a drawback since 1989, but began recovering as investment is on the rise.[citation needed]

Reșița currently has 5 supermarkets of which two Carrefour supermarkets, one Plus supermarket, one Billa supermarket, and one Kaufland near the road entrance from Bocşa. The Shopping Center of Reșița is called Nera Shopping Center located in the Centrul Civic. There are a variety of companies operating in Reşiţa, offering almost everything a normal consumer would need. 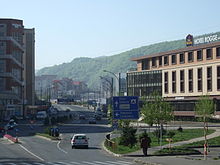 Reșița's public transport relays on 2 Tram lines and 5 bus lines, and is run by the Prescom company.

The 2 Tram Lines are Renk-Muncitoresc line (0), and Renk-Stavila line (DP) which is basically an expansion of the Renk-Muncitoresc line, but there are only 3 trams on this line. The full tram fleet is consisting of about 28 trams. The current trams are GT8 models imported from Germany, and fully replaced the former pre-89 trams in 2002. Today there are only 2 of these former trams remaining, but they are out-of-use and scheduled for destruction. As of 2008 the new mayor announced his intention to decommission all trams and replace them with modern buses complying with EU standards.

Reșița's bus fleet consists of about 25 buses running on 6 lines:

Reșița's bus fleet was to be upgraded sometime during 2009.

Reşiţa features a main 4 lane road that connects the neighbourhood Stavila to the neighbourhood of Calnic. This main road passes through almost all important neighbourhoods in Reșița. The rest of the neighbourhoods in Reşiţa are accessible via 2 lane secondary roads or single-lane roads. Roads of Reşiţa are usually well maintained, especially the main road, but there are occasional pot-holes on secondary roads. The road signs are usually well placed and well maintained, and traffic is usually friendly and traffic jams are a myth. Accidents are very rare and almost never lethal. Externally Reşiţa is connected by national roads to Caransebeș (Continued to Bucharest) and respectively Timişoara. There are also 3 county roads connecting Reşiţa to Oraviţa, Vama Năidaş and respectively Anina.