University of Pau and Pays de l'Adour
For other uses, see UPPA (disambiguation).

The University of Pau and Pays de l'Adour (L'Université de Pau et des Pays de l'Adour or UPPA) was founded in 1972. It is a multi-site establishment, based in Pau (département of Pyrénées-Atlantiques) but also in Bayonne, Tarbes and Mont-de-Marsan in the Adour river basin. Coming administratively under the Academy of Bordeaux, it is the third largest university in southwestern France (after Bordeaux and Toulouse), with some 12,000 students.

The University's logo is a stylised representation of the Pyrénées or the Pic du Midi d'Ossau, the blue triangle being the Atlantic ocean. The colors used (yellow, green blue) are those of the university's graphic charter. 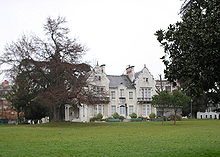 The university was founded in 1970, in a splendid formerly urban park. However, the origins of the law faculty (UFR de droit, économie et gestion) go further back; it was created in 1947 by Robert Poplawski (dean from 1947 to 1953) and Dean Vizioz, and was lodged in Villa Lawrence in Pau town centre. 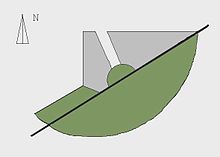 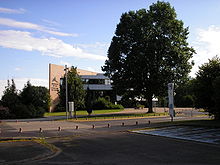 With nearly 9,000 students, the Pau campus is the largest. The President's office is located there in the Présidence (Presidency) semicircular building. The campus is located to the north of Pau, about twenty minutes ride from the town centre, but within the urban limits.

The campus is comprised in the space between Avenue de l'Université-Cours Léon Bérard-Boulevard Tourasse to the South, Avenue du Doyen Poplawski to the West, rue Audrey Benghozi and Boulevard Lucien Favre to the North and Allées Condorcet to the East.

There are three UFR (unités de formation et de recherche, teaching and research departments) based in this campus: arts, law, sciences. There is also an Institut Universitaire Technologique (IUT), the ENSGTI and an Institut d'Administration des Entreprises (IAE) located in Pau with an antenna in Bayonne.

There are two specialised university libraries, one for the sciences UFR, the other common to the law and arts faculties. 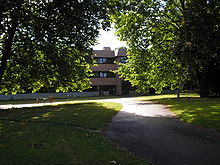 View of the rear of fac de Lettres building 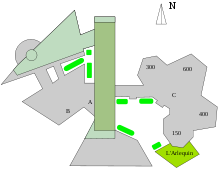 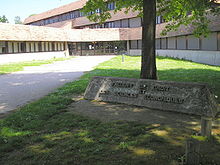 The UFR provides tuition to about 3,000 students dispatched in several degrees.

It is located in the north-western part of the UPPA campus, south-west of the École supérieure de commerce (ESC), west of the "fac de Lettres", north-west of the IRSAM (Institut de recherche sur les sociétés et l'aménagement) building and east of the André Lavie stadium, across Dean Poplawski avenue. South of the UFR lays a big lawn much appreciated by students during summer times.

There is an east-west road entrance (entrée ouest and rue Saint-John Perse) to the campus dedicated to the UFR branching from the north-south oriented Dean Poplawski avenue. This is just north of the UFR. The entrance is restricted to cars by a height barrier. Delivery vehicles have to come from another entrance to the campus.

There is a bicycle stand near north-east entrance.

There is a STAP (Pau's bus company) line 4 and Studibus-line bus stop (facultés) along Dean Poplawski avenue with direction town center and the SNCF train station.

The UFR is accessible to disabled peoples, though the double-doors and the badge restricted areas may still be problems for them to access the elevator.

The UFR is lodged in a three storeys elaborate building with the amphitheatre-like classrooms ("amphis") being grouped at the eastern corner of the complex. The inner infrastructure is made of unpainted crude supporting concrete walls with lighter separation plaster painted walls. The exterior roofing is made of small clay tiles. Brick is also used for the sculptural elements like the well-like artificial space in the center of the inner patio, as well as pebbles for floor decoration. Large glass bays are also used as separation elements.

The classrooms are disposed on the three floors of the building, mainly in B and C aisles. Classroom are numbered accordingly to their position in a specific aisle and on a specific floor (for example, B200 is the first room in the B aisle on the second floor, B205 is the fifth room on that same second floor).

3 classrooms, named Aspe, Barretous and Ossau, are equipped with computers on the first floor and are dedicated to teaching. Two more computer-equipped classrooms on the second floor (B200 and B202) are in free access for the UFR students. Strangers to the university and students from others UFRs wouldn't get access through authentication.

Documentation centers are maintained in the badge-restricted areas, one on the ground floor for law researches, another on the first floor for economics and management researches.

There is a general purposes service (affaires générales) that takes care of all of material issues regarding the UFR with a service chief and a secretary. Its missions include the organisation of a reception desk service (accueil) situated in the main hall of the UFR and operated by one agent, a student secretary (called la scolarité and often shortened as la scol) with 8 or so secretaries, an accountancy service (comptabilité or just compta) with two secretaries, a repair and cleaning service with 8 or so agents, a computer-issues service with four agents maintaining an assistance point to teachers and students (permanence informatique) at the first floor.

There is a cafeteria called "L'Arlequin" close to the FDEG-IAE buildings and some vending machines have been put at different spots. Payments can be made via Aquipass student smart card moneo money service.

uppawifi wireless network signal is available to students equipped with laptops in the UFR.
Network printers are available through communication with a printing server. Students are allocated credit during inscription at the beginning of the university year accordingly to their formation level and are automatically charged 5 euro-cents per printed page. When empty and in order to feed his printing account a student can pay for further copies to the reception desk.
Others servers are accessible for more specific tasks during tuition, like access to shared network drive spaces or software (for more see FDEG-IAE local resources site)

Teachers can use video projectors for teaching either with fixed or mobile equipment.

The UFR is able to organise videoconferencing through CRATICE mediation.

Licence and Master degrees are available.

Research centers are located in electronic identification badge-restricted areas at ground level (law) and at the second floor (economics, management). 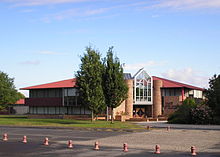 Life on the campus

The Centre Local des Oeuvres Universitaires et Scolaire (CLOUS) campus antenna is taking charge of all things regarding students life. It is situated to the North of the campus (for more see : Bordeaux CROUS internet site).
There are a number of dormitories (résidences universitaires) situated on the campus (résidence Gaston Phoebus) or near the campus or in town. The accommodations range from single rooms to small apartments.

The main restaurant is called Cap Sud. It is situated to the South-West of the campus. That is where the maison de l'étudiant is located.

There are students Unions present on the campus.

Staff is taken care of by Direction des ressouces humaines (DRH) services situated on the second floor in the Présidence building.

There is a chain at Cap Sud dedicated to University personnel (L'oasis). Staff belonging to IATOSS or ITRF personnel categories can also go eating to the nearby Cité administrative's restaurant inter-administratif (RIA).

There are a number of Unions present on the campus. 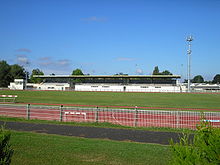 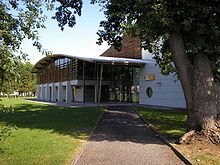 Located around Pau's universitary campus are a number of facilities :

The site in Bayonne

The Campus of Bayonne - Anglet gathers 2.500 students in 2 UFR. The two sites are St Crouts and Montaury.

The site in Tarbes

and a sport section (STAPS).

The site in Mont-de-Marsan