St George's Chapel is the place of worship at Windsor Castle in England, United Kingdom. It is both a royal peculiar and the chapel of the Order of the Garter. The chapel is governed by the Dean and Canons of Windsor.

The chapel is located in the Lower Ward of the castle, which is one of the principal residences of Queen Elizabeth II.

The day to day running of the chapel is the responsibility of the religious College of St George, which is directed by a chapter of the dean and four canons, assisted by a clerk, virger (traditional spelling of verger) and other staffers. The Society of the Friends of St George's and Descendants of the Knights of the Garter, a registered charity, was established in 1931 to assist the College in maintaining the chapel. 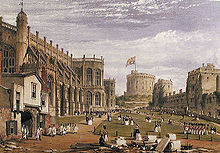 In 1348, King Edward III founded two new religious colleges: St Stephen's at Westminster and St George's at Windsor. The new college at Windsor was attached to the Chapel of St Edward the Confessor which had been constructed by Henry III in the early thirteenth century. The chapel was then rededicated to the Blessed Virgin Mary, St Edward the Confessor and St George the Martyr. Edward III also built the Aerary Porch in 1353-1354. It was used as the entrance to the new college.

St George's Chapel became the Mother Church of the Order of the Garter, and a special service is still held in the chapel every June and is attended by the members of the order. Their heraldic banners hang above the upper stalls of the choir where they have a seat for life.

The period 1475-1528 saw a radical redevelopment of St George's Chapel, set in motion by Edward IV and continued by Henry VII and Henry VIII. The thirteenth century Chapel of St Edward the Confessor was expanded into a huge new Cathedral-like chapel under the supervision of Richard Beauchamp, Bishop of Salisbury, and the direction of the master mason Henry Janyns. The Horseshoe Cloister was constructed for the new community of 45 junior members: 16 vicars, a deacon gospeller, 13 lay clerks, 2 clerks epistoler and 13 choristers.

St George's Chapel was a popular destination for pilgrims during the late medieval period. The chapel was purported to contain several important relics: the bodies of John Schorne and Henry IV and a fragment of the True Cross held in a reliquary called the Cross of Gneth. These relics all appear to have been displayed at the east end of the south choir aisle.

The Chapel suffered a great deal of destruction during the English Civil War. Parliamentary forces broke into and plundered the chapel and treasury on 23 October 1642. Further pillaging occurred in 1643 when the fifteenth-century chapter house was destroyed, lead was stripped off the chapel roofs, and elements of Henry VIII's unfinished funeral monument were stolen. Following his execution in 1649, Charles I was buried in a small vault in the centre of the choir at St George's Chapel which also contained the coffins of Henry VIII and Jane Seymour. A programme of repair was undertaken at St George's Chapel following the Restoration of the monarchy.

The reign of Queen Victoria saw further changes made to the architecture of the chapel. The east end of the choir was reworked in devotion to Prince Albert; the Lady Chapel, which had been abandoned by Henry VII, was completed; a royal mausoleum was completed underneath the choir; and a set of steps were built at the west end of the chapel to create a ceremonial entrance to the building.

Emblem of the Order of the Garter 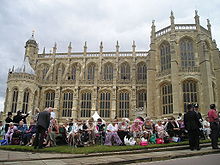 Members of the public outside St George's Chapel at Windsor Castle, waiting to watch the Garter Procession

The order once enjoyed frequent services at the chapel, but, after becoming infrequent in the 18th century, were discontinued after 1805. The ceremony was revived in 1948 by King George VI for the 600th anniversary of the founding of the Order, and has since become an annual event.

After their installation, members are each assigned a stall in the chapel choir above which his or her heraldic devices are displayed.

A member's sword is placed below a helm which is decorated with a mantling and topped by a crest, coronet or crown. Above this, a member's heraldic banner is flown emblazoned with his or her arms. A much smaller piece of brass ("stall plate") is attached to the back of the stall displaying its member's name, arms and date of installation.

On a member's death, the sword, helm, mantling, crest, coronet or crown, and banner are removed. A ceremony marking the death of the late member must be held before the stall can be assigned to anyone else. This ceremony takes place in the chapel, during which the Military Knights of Windsor carry the banner of the deceased member and offer it to the Dean of Windsor, who places it on the altar.

The stall plates, however, are not removed; rather, they remain permanently affixed somewhere about the stall, so the stalls of the chapel are festooned with a colourful record of the members throughout history.

St George's Windsor is among the most important and ambitious medieval chantry foundations to have survived in England. The college, itself a medieval chantry, also contains a number of independent chantries in the form of altars and small chapels dedicated to various members of the English monarchy and also to a number of prominent courtiers, deans and canons. Masses, the Office and prayers would be offered in these chantries for the good of the founder. Interestingly, Henry VIII had intended a chantry to be set up in the Chapel, despite the fact that he instituted the religious changes which brought about the Reformation in England and the eventual suppression of chantries.

The much admired iron gates in the sanctuary of the chapel as well as the locks on the doors of the chapel are the work of the Cornish metalsmith John Tresilian.[1]

The status of the college as a royal foundation saved it from dissolution at the Reformation. As a result, many of the smaller chantries within the chapel were preserved. These are the only remaining chantries of their kind in England which have never formally been suppressed. 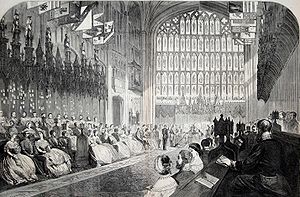 Wedding of the Prince of Wales and Alexandra of Denmark, 1863

The chapel has been the site of many royal weddings, particularly of the children of Queen Victoria. These weddings include:

In addition to the above, the union of The Prince of Wales and Camilla Parker Bowles in 2005 received a blessing from The Archbishop of Canterbury.

The chapel has been the site of many royal funerals and interments. Royals interred here include: