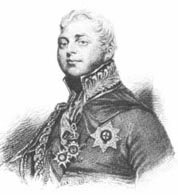 The Prince Frederick, Duke of York and Albany (Frederick Augustus; – ) was a member of the Hanoverian and , the second eldest child, and second son, of King George III. From 1820 until his death in 1827, he was the to his elder brother, King George IV, both to the and the Kingdom of Hanover.

As an inexperienced young military officer, he presided over the unsuccessful campaign against the forces of France in the , during the conflict which followed the French Revolution. Later, as commander-in-chief of the British army, he made amends for his initial military setbacks during the late 1790s by brilliantly reorganising his nation's forces, putting in place administrative reforms which enabled the redcoats to defeat Napoleon's crack troops. He also founded the United Kingdom's renowned military college, Sandhurst, which promoted the professional, merit-based training of future commissioned officers. The Duke is best remembered today as the inspiration for the , "".

Prince Frederick Augustus, or the Duke of York as he became in later life, belonged to the . He was born on , at , . His father was the reigning , King George III. His mother was Queen Charlotte (née Princess of Mecklenburg-Strelitz). He was christened on at St James's, by The , — his godparents were his great-uncle The Duke of Saxe-Gotha-Altenburg (for whom The Earl Gower stood proxy), his uncle The Duke of York (for whom The Earl of Huntingdon stood proxy) and his great-aunt The Princess Amelia. [ [http://users.uniserve.com/~canyon/christenings.htm#Christenings Yvonne's Royalty Home Page: Royal Christenings] ]

On , when Prince Frederick was six months old, his father secured his election as in . He received this title because the prince-electors of Hanover (which included his father) were entitled to select every other holder of this title (in alternation with the ), to which considerable revenues accrued, and the King apparently decided to ensure that the title remained in the family for as long as possible. At only 196 days of age he is therefore listed in the "" as the youngest bishop in history. He was invested as Knight of the Most Honourable Order of the Bath in 1767 and as a Knight of the on .

George III decided that his second son would pursue an army career and had him gazetted colonel in 1780. From 1781 to 1787, Prince Frederick lived in Hanover, where he drank and fornicated immoderately yet still found time to earnestly attend the manoeuvres of the Austrian and Prussian armies and studied (along with his younger brothers, Prince Ernest, Prince Edward, Prince Augustus and Prince Adolphus) at the . He was appointed colonel of the 2nd Horse Grenadier Guards (now 2nd Life Guards) in 1782, and promoted major-general and appointed colonel of the Coldstream Guards in 1784.He was created and Albany and on

In the summer of 1787, American newspaper accounts surfaced alleging that a government plot was under way to invite Prince Frederick to become "King of the ". This of course never happened. On his return to Britain, the Duke took his seat in the , where, on during the Regency crisis, he opposed William Pitt's Regency Bill in a speech which was supposed to have been inspired by the Prince of Wales.

In 1795 The Duke of York took command of the regular British Army, including the , the Militia, and the Volunteers [p.128, Glover] , and immediately declared

that no officer, should ever be subject to the same disadvantages under which he had laboured

reflecting on the Netherlands campaigns of 1793-94. [p.128, Glover] The Duke of York's participation in the made a strong impression on him, and he was the single most responsible person in the to institute reforms that created the force which later was able to serve in the , as well as the preparations for the expected .

The Duke of York was his father's favourite son. He remained, however, somewhat in the shadow of his flashy elder brother, George, Prince of Wales, especially after the latter became Prince Regent due to the mental incapacity of the King. However, the two brothers continued to enjoy a warm relationship. They had many interests in common and they both enjoyed indulging their physical desires; but generally speaking, the Duke of York took a more diligent approach to the discharge of his public duties than did the Prince Regent.

The was renamed 72nd (Duke of Albany's Own Highlanders) Regiment of Foot on . [ [http://www.regiments.org/regiments/uk/inf/072-786.htm Land Forces of Britain, The Empire and Commonwealth] ]

On at Charlottenburg, Berlin, and again on at , the Duke of York married his cousin Princess , the daughter of King and . The new Duchess of York received an enthusiastic welcome in London, but the marriage was not a happy one. The couple soon separated and the Duchess retired to , Weybridge, where she lived eccentrically and died in 1820. Their relationship after separation appears to have been amicable, but there was never any question of reconciliation. The Duke and Duchess of York had no children. But the Duke was rumoured to have sired several illegitimate offspring to different mothers over the years. One of these illegitimate children was said to be Captain (circa 1786-1832), a British military officer. Other reputed bastard offspring of the Duke included the Vandiest siblings, Frederick George (1800-1848) and Louisa Ann (1802-1890); Colonel (1787-1873), who served as a commissioned redcoat officer in the wars against Napoleon and became Collector of Customs for the Colony of , Australia, from 1834 until his retirement in 1859; and army Captain (1788/89-1867), a landowner and pioneer of Augusta in Western Australia.

In 1793, the Duke of York was sent to in command of the British contingent of Coburg's army destined for the invasion of , a force which captured and occupied in July that year. On his return to Britain in the following year, George III promoted him to the rank of , and on , appointed him Commander-in-Chief in succession to Lord Amherst. His second field command was with the army sent to invade Holland in conjunction with a Russian corps d'armée in 1799. Sir and Admiral Sir Charles Mitchell, in charge of the vanguard, had succeeded in capturing the Dutch ships in Den Helder. However, following the Duke of York's arrival with the main body of the army, a number of disasters befell the allied forces. On , the Duke signed the , by which the allied expedition withdrew after giving up its prisoners.

These military setbacks were inevitable, given the Duke's lack of combat experience as a field commander, the lamentable state of the British army at the time, and the intervention of pure bad luck during the campaign. Nonetheless, because of Flanders, the Prince was destined to be unfairly pilloried for all time in the rhyme , which goes:

Mindful of the poor performance of the British army that he had experienced in Flanders, the Duke of York carried out many significant structural, training and logistical reforms to the British military forces during his service as the army's commander-in-chief during the early 19th Century. These reforms led to Great Britain's subsequent successes in the wars against . In these positive outcomes, culminating in the victory over Napoleon at Waterloo, the Duke was aided by the military genius of the Duke of Wellington, who eventually would succeed him as commander-in-chief of the army. It should be noted that the Duke resigned for a time as commander-in-chief, on , as the result of a scandal caused by the activities of his latest mistress, . Clarke was accused of illicitly selling army commissions under the Duke's aegis. A select committee was appointed by the to inquire into the matter. The parliament eventually acquitted the Duke of having received bribes by 278 votes to 196. He nevertheless resigned because of the high tally against him. Two years later, on , after it was revealed that Clarke had received payment from the Duke's disgraced chief accuser, the reappointed the now exonerated Duke of York as commander-in-chief. The Duke would hold this post for the rest of his life. In addition, the Prince Regent created his brother a Knight Grand Cross of the .

The Duke of York maintained a country residence at near Weybridge, Surrey; but he was seldom there, preferring to immerse himself in his administrative work at Horse Guards (the British army's headquarters) and, after hours, in London's high life, with its gaming tables and attendant vices. (The Duke was perpetually in debt due to his excessive gambling on cards and racehorses.) Following the unexpected death of his niece, Princess Charlotte of Wales in 1817, the Duke became second in line to the throne, with a serious chance of inheriting it. This opportunity to become king improved further in 1820 when he became with the death of his father, the elderly and mentally ill George III.

The Duke of York managed to pre-decease the equally unhealthy George IV, however; he died of dropsy and apparent cardio-vascular disease at the home of the on Arlington Street, London, in 1827. The Duke of York's dissipated lifestyle had no doubt led to his relatively early demise, thus denying him the throne. After lying in state in London, the Duke's remains were interred in St. George's Chapel, at Windsor.

As a son of the sovereign, Frederick was granted use of the arms of the kingdom, differenced by a "label argent of three points, the centre point bearing a cross gules". [ [http://www.heraldica.org/topics/britain/cadency.htm Marks of Cadency in the British Royal Family] ]

Fredericton, the capital of the province of , was named after Prince Frederick. The city was originally named "Frederick's Town". Fredericksburgh Township, now part of Greater Napanee, Ontario, was named after the Duke of York. When was re-founded to be the capital of in 1793, it was named York after Prince Frederick. Although the city's name was changed back to Toronto in 1834, many surrounding localities still bear the name of York.

The Albany and in London are also named after him. The towering on Waterloo Place, just off The Mall, was completed in 1834 as a memorial to Prince Frederick. It was paid for by the soldiers of the British Army who each gave up one day's wages to pay for the column.Fact|date=May 2008 A statue to Fredrick's honour is also in . The inscription reads in main: "Field Marshal His Royal Highness Frederick Duke Of York and Albany KG Commander in Chief of the ". He founded The Duke of York's Royal Military School in 1803 in Chelsea, which relocated to Dover in 1909. Originally named the Duke of York's Royal Military Asylum, it was set up to look after orphans of military families. Now co-educational, the school remains exclusive to military children.

The was given the title in 1823 upon its resumption as a Highland regiment, following its previous withdrawal of Highland status in 1809. In 1881,the regiment became 1st Battalion .

* - a notable military allowance of the time
*